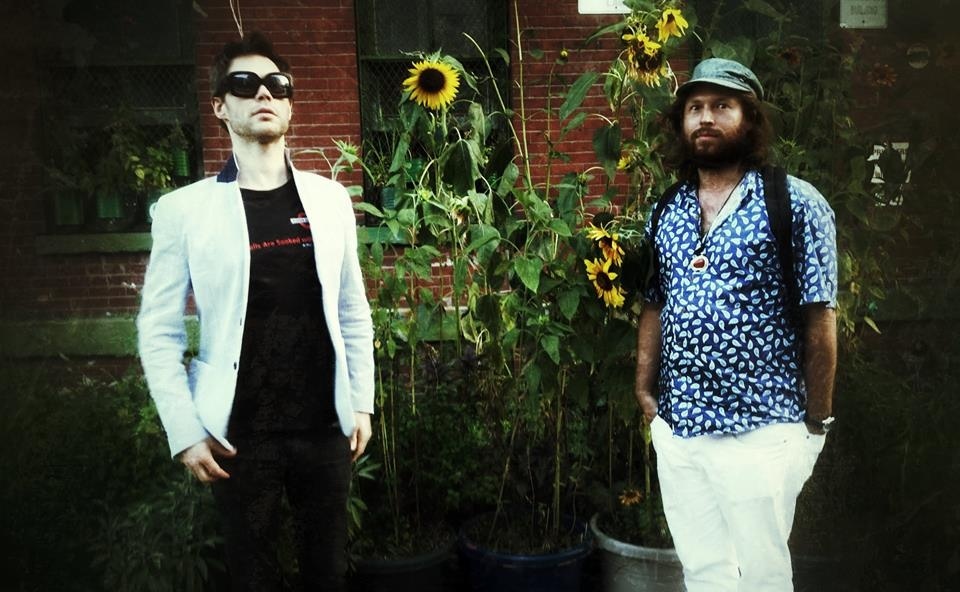 Drinking with Talibam! and Alan Wilkinson

Talibam! is a duo based in New York City which can be described in various ways – as a classic keyboards/drums free jazz duo, as Dadaist provocateurs with an innate love for the history of music, as a theater group in the tradition of the Upright Citizen's Brigade, as an electronic ensemble inspired by Stockhausen, as amateur rappers, as techno DJ's, etc. Since their inception in 2003, Talibam!’s ultimate goal has been to wed disparate ideologies through proficiency, controversy, inquiry, and compassion – an approach perpetuating audiences and listeners to face, question, define, and attempt to defend their own level of tolerance.

To date, Talibam! has traveled to over 40 countries, completed more than 30 international tours, and released nearly 30 albums. Given their name and occasionally lo-fi surrealism, they might also be just as easily written off as goofballs, but Matthew and Kevin could never be accused of slacking.

Alan Wilkinson was a visual artist before he was a musician. He moved from Manchester to Leeds in 1975 in order to pursue a degree in fine arts with a concentration on painting. After graduation, he began playing the alto saxophone. He joined the group Crow, which also included drummer Paul Hession, who would become Wilkinson's longtime associate. In 1979 he formed the group Art, Bart & Fargo with Hession and tenor sax player Pete Malham,experimenting with playing a wide range of other instruments, mainly percussion, and mixing composition with pure improvisation. After playing in England, Belgium and Germany the trio disbanded after three years. Known for the sheer intensity and physicality of his music, and his ability to react at speed, British saxophonist Alan Wilkinson has played with many of the leading players on the international free scene, as well as being a tireless promoter and advocate of the music.

There’s a very funky language being used to write about avant-garde and improvised music and though it doesn’t mean much or come easy to me, it seems inescapable with the mighty Talibam! (with Matt Mottel on keyboard, electronics and Kevin Shea on drums) and their encounter with Alan Wilkinson (tenor sax and baritone sax). While in Nickelsdorf for Konfrontationen 2016, they were up next and I took a little distance, ‘cause the last time I saw them in Bucharest in 2010 I went full mental.

You can’t go into a paroxysm trance sitting on a chair surrounded by coolness, now, can you? They went full throttle monkey business impetuously exulting my brain to the point of sublime dementia. This time I didn’t go bananas, it was all intellectual fruity power. This outfit is as powerful as any acidic ecstasy (whatever that may be), going straight to the core – blowing it up and sinuously coming back for the climax.

We felt too exotic to go back to the concert so we hooked up with Talibam! & Alan Wilkinson for a talk and some distillation.

“Right now we’re at a pivotal place where our culture is more conservative on all sides of the spectrum, both on the reactionary side, of Muslim people that are misconstruing cultural appropriation and actual political opposition to the war state and economy for indiscretion and malevolent attitude, that’s not what it is.” 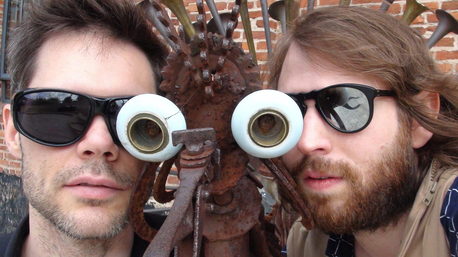 Four Circumcised Blokes In A Car

Alan Wilkinson: If somebody did a cover of "Careful with that axe, Eugene", that would be quite difficult to spot, cause it’s quite an abstract track, that one.

Matt Mottel: Alan, when you’re playing with us as opposed to groups that maybe aren’t as consistent with their collaboration …

Alan: I always know that you’ve been playing as a duo so I need to respect that relationship, so when I come in I need to kind of be feeling their relationship.

Matt: But does it also open you up to having the confidence to know that where we are is pretty elastic and moving?

Alan: Well, if I didn’t know that I wouldn’t play with you, would I?

Matt: Yes, for sure. Cause you’d be fighting us as opposed to working with us. Also for us, when we met you, it was finally someone who would add to us without us having to compromise our vision.

Alan: I’ve never known quite how our relationship…

Matt: What is our relationship status?...

Matt: Alan, tell us about recording at Abbey Road Studios.

Alan: Well, it was at the same studio that The Beatles have recorded some famous thing and the piano they had was played by John Lennon. I think it’s studio 2 in Abbey Road. It was John Coxon who said he had some money to spend and got the Abbey Road Studios at half price. The session lasted the whole day. I mean bands used to play in studios for weeks, months. We got three records out then.

Matt: That’s the opposite of our one day recording. Our first LP was recorded under strange circumstances.

Alan: I drove us. All of the titles on the first LP and even the concept for the album cover was made in the car on they way to and from the recording session. It’s called “Dem ol Apple Pie Melodies”. Because the music was so fucking out there, I said “We should do this like a Country and Western album, with a woman that looks like Doris Day on the cover, holding our album out, saying like a Looney Tunes thing, saying “Dem ol Apple Pie melodies”. And they made me draw it. One of the tracks is called “Four Circumcised Blokes In A Car”, a very literal experience. 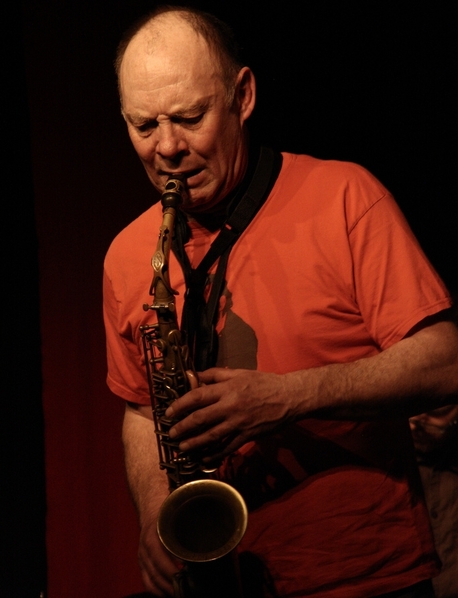 Bogdan: So, tell us about that “Talibam! existential crisis” you were talking about earlier.

Alan: Gina is worried and has been saying to me: I’m not sure you should play with Talibam! in the current climate because someone might walk in and go “who is this fucking band?!”

Kevin: This should be the last one, then we’ll just do our names.

Matt: The majority of the likes on Talibam!’s Facebook page comes from Afghanistan and Pakistan, and then the other band that most of these people like is Talib Kweli. You can’t like “Taliban” on Facebook, so you can like Talibam!, an experimental noise-rock group from Brooklyn. But I think right now we’re at a pivotal place where our culture is more conservative on all sides of the spectrum, both on the reactionary side, of Muslim people that are misconstruing cultural appropriation and actual political opposition to the war state and economy for indiscretion and malevolent attitude, that’s not what it is, we’re much more sympathetic to the cause of people from around the world, but the name is dangerous on both sides, both for curators or media, magazines, festivals. No one has said to us directly: We don’t book your band or write about it because your name is this. Certainly not here in Nickelsdorf.

Alan: I’ve always found myself explaining to people what the name is about, I tell them about the headline in the NY newspaper, “Talibam!”, when they went into Afghanistan. I feel that I have to say that.

Matt: I’m happy to explain that too. It’s important to get that context, that it’s an appropriated name. Maybe we should change it to Malibat. It’s like you’re saying: The world is wrong, and we’re reversing course, cause that’s what we try to say, that the world was already making all these wrong decisions in 2003, and now, fucking 14 years later, those wrong decisions are worse. We couldn’t conceive in ’03 where we’re at in ’16. But our band name is one of the most relevant of the last generation because it defines this era of international mistreatment of third world countries by the West. [..] I think the implication of art is supposed to be political, I don’t think art is meant to be only aesthetic. If it’s only aesthetic it’s either dilettante or relationships with Coca-Cola, and that’s fine, many people drink Coca-Cola. I like to think that art needs to have a political implication, but I’m also not naïve to think that the revolution is going to be caused by a free-jazz concert in Nickelsdorf. Culture is proving that we are at an angry place. Ten years ago it was hard to conceive getting killed over a comic book, what is going on?

Alan: Kevin, do you find that the response to what you do is better in ex-communist countries or do you find any difference to their response, depending on the political situation of that country? In Europe.

Kevin: It’s always varied, cause our set is different all the time, we improvise in all different ways.

Alan: ´Cause you’ve played in Bucharest and various places from the Old East, where the generation of people that come to your gigs are probably too young to know what happened, but there are still things in the countries that still come from those times, because of the older people that grew up in all of that. I traveled quite a bit in Bulgaria and there were things that reminded me of the old days touring in East Germany.

Matt: Romania feels much closer to the European tradition.

Bogdan: We kept the assholes from the former regimes, they hold high positions in the governments. An old punk from Ukraine wrote: “In the late 80’s we were persecuted by communist party apparatchiks, in the 90’s by business gangsters, in the 2000’s by Ukrainian nationalists, now by state Security Service. But the paradox is that – always by the same persons”.

Matt: How did you guys as audience members react to our music?

Victor: I go about banging my head. I pissed myself.

Matt: Why, because we threw out an energy that sounded so much more complete than any other music?

The French composer reveals a glimpse of his fascinating music universe.

Rully Shabara & Wukir Suryadi from Senyawa - A Force of Nature

From Indonesia with love, conversations with Rully and Wukir from Senyawa.