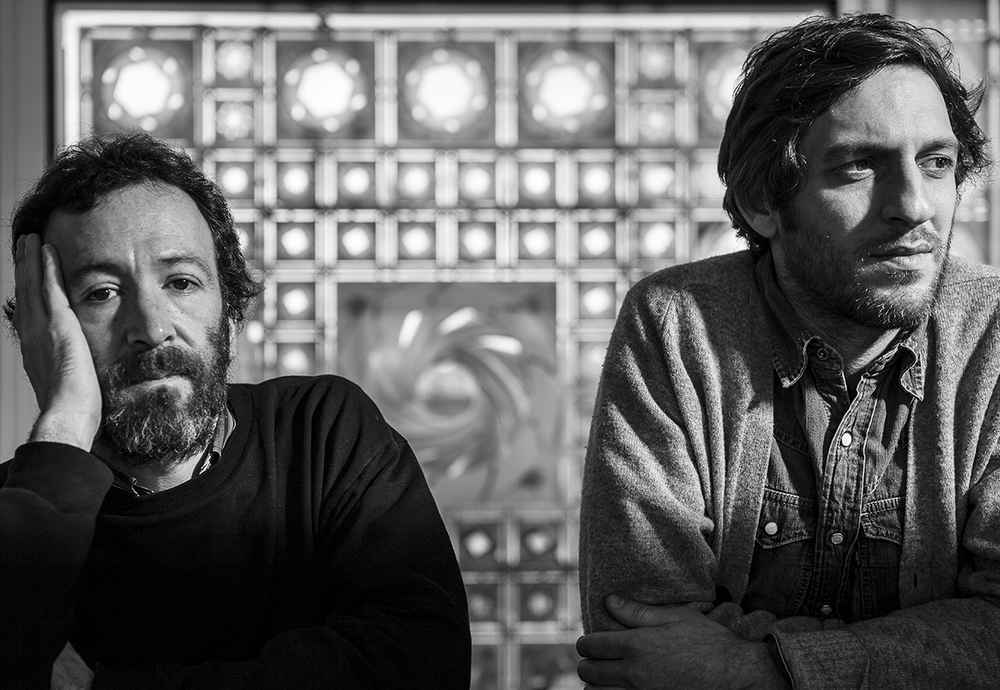 The human society is based on patterns. Up to a point, everybody can agree with everyone on anything. There is a common thin line that keeps us altogether, united under similar values, wishes, desires and passions. We are humans, but we are not so different as we might want to believe we are. Actually, we look so much alike, that in certain circumstances it is almost impossible to make an individual separation between two different ideas, coming from two different people.

I smell a sense of myth around the idea of singularity of human beings, while sapping from a glass of whisky on the rocks with Stutz at a party in Bucharest, where Acid Arab are playing in front of 700+ people. Control club is packed; if you, somehow, managed to get right in the middle, the ice in your glass would melt down even sooner than Jesus turned water into wine.

Among good sex, good food and other hedonistic pleasures, patterns are the things that keep us together, under the same roof of society, without even noticing it. Without them, life wouldn't probably be so easy. Up to a certain point, it's likely that the association of the words "acid" and "arab" might already elicit instant reactions from people who have never heard the name before. Because this is where the mental patterns arise: looking at the global music circuit, the past 5 - 8 years witnessed a growing and exciting interest in the outernational music field, embedded in all kinds of sounds, from oriental, Arabic, Turkish, Indian music, with the help of some respected record labels (and first of all - people), that took this job up to the most professional top level.

“We’re going as the wind pushes us, so let’s see. It’s cool. Being free is really important and we feel that in this period.”

We met the French producers Guido Minisky and Hervé Carvalho in the lobby of the hotel, just a few hours before their gig. In that day, January 16, they just released the third EP from the Acid Arab Collection, which now became a trilogy. Along a new track of theirs, called 'Zahr', there are contributions from Gilb’R (owner of Versatile Records and half of Chateaux Flight, among other projects) with saxophone from Etienne Jaumet; An-I & Capablanca are delivering the fiercest and wild electro-punk monster and the mysterious French duo Society of Science drop a ’’mean acid line, possessed beatings and creepy voices come together with an in-your-face style that smells of danger and excitement.’’ The third EP can be listened HERE.

Stories say that the idea of Acid Arab came after a trip to a festival in Tunisia, together with DJ Gilb’R. Guido and Hervé already knew each other for some good years, since they used to work at the same club/venue. Guido met Gilb’R when he was a journalist, requesting an interview, and eventually they became friends. They played together with Versatile’s owner at this festival they can’t tell us much about. But they do remember the gig in Cairo, a significant event for their career.

Acid Arab came after some good months of parties called Moon Power, in a club called Chez Moune in Paris. Hervé recalls that some of their friends started to make some tracks especially for these parties.

‘’Like the Omar Souleyman remix released on Versatile, it was just a tool for our party in the beginning, it was not supposed to be a release on a record. Then, when we got a few of these special tracks for our party, we said: Whoa, we have some great stuff, let’s release it and let’s do this Collection project and that’s how we did it. We took our computer and we sent some mails and Versatile called our East friends as well and the project arrived like this. Actually, we didn’t think too much - all these things happened. It was just like, some vibe, some feelings, let’s do this, let’s do that, and then the things became bigger and bigger and then we started to produce and…here we are. It’s strange. But exciting!’’ 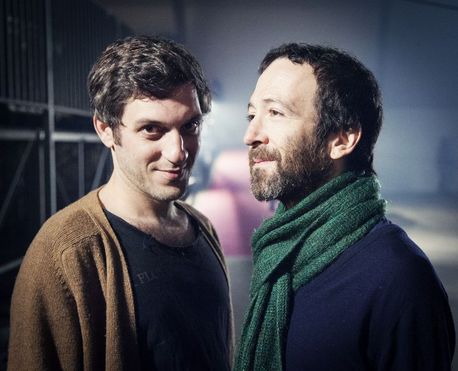 Inspired by the likes of Bariș K, indulging a strong background in acid house music and digging in the esoteric world for unearthed sounds and melodies, Acid Arab seem like a modern cultural bridge between occidental music and oriental sounds and themes, a singular sound in the industry. Don’t say industry! As Hervé would say, ’’ industry is a big word; we are in the music artisanal more than industry. I don’t know what you mean by industry, for me it’s like selling a lot of records, and we don’t. We sell a few hundreds, maybe thousand.’’ Hervé is also involved in a low profile acid house project, called Acid Square Dance, together with a friend of him. ‘’It was all about doing some covers of Armando, DJ Pierre… It was like a jazz band would jam on jazz covers, we did the same with acid house.’

The guys get their music from all over the Internet, flea markets from different cities where they travel, friends; when the language can become an issue in the digging process, they have some friends who know the Arabic language and help them. Another friend of theirs, that Hervé suggests is very important, is Viktor Kiswell. ‘’He’s a record dealer really specialized in Oriental, African and world-wide beats…We invited him to play at our party and he brought us a lot of stuff; he opened our minds for us on many artists. Mogollar, I think it comes from him; also Les Abranis… all the crazy shit comes from him.’’

But you can’t deny a glimpse of irony in the association of a French with the Arab people. Hervé jokes, ‘’about the political message and all that, we are really surprised that nobody attacked us.’’ But his buddy Guido recalls a small ‘’incident’’. ’’This girl, this musician that we liked, from Paris, we thought what she did was really good; so we contacted her, said “hey we’re doing this compilation, if you’d like to be on it” and she said yes, but then she never answered back, and one day she wrote a horrible thing about us on Facebook. I think it’s the only time that something like that happened. She was saying that we were stealing music and culture that didn’t belong to us, that we were Jews, things like that.’’

Asked if they ever had any problems because of a flyer displaying a veiled woman, Guido recalls that it was not really a problem, but ‘’someone told us we shouldn’t do that. That was at the beginning of this project and that made us realize that we don’t know shit about this culture and we have to learn stuff. We don’t want to offend anyone, we don’t want to be provocative, and if people don’t want to see a girl with burka on a flyer, then we won’t put them. That’s ok.’’ Hervé is more optimistic about it. ‘’Maybe one day we’ll work together! She will change her mind, maybe. I hope so.’’.

Guido has recently put out a series of mixes called Diaspora, free on Internet, for no particular purpose. ‘’The only difference with Acid Arab is that it’s not focused on eastern and oriental, and it’s not electronic music. We spent these last few years digging a lot of stuff and I have a crazy amount of music and I want to do something with it. Because that’s the whole point of being a DJ, sharing the music. Most of these things couldn’t fit in Acid Arab so…there they are.’

Acid Arab recently developed a live act, together with Pierre-Yves Casanova, followed by a tour this year. ‘’It’s really new, yesterday (January 15) it was our third one. Yesterday it was 45 minutes. It’s a live with machines, computers and a keyboard player. And we play our tracks in a live way. Yesterday we played live in Holland at a festival. It was really cool. So this is going to be our big thing for 2015 – the live act.’’ But no specific plans on releasing an album. ‘’We’re going to release some music for sure, but we don’t really know the format. Sometimes we think, “yeah, maybe we have to do an album”, other times we say we’re going to make an EP and so…As I told you, we are not so able to organize…like…a long-term thing...like a career. It’s just like…we’re going as the wind pushes us, so let’s see. It’s cool. Being free is really important and we feel that in this period’’, Hervé thinks.

Along other things, Guido enjoys watching Bollywood movies. ‘’If you don’t live there, I think you get into these movies from the music…That’s exactly what happened to me’’, Guido giggles. ’’At first, when I watched the first movies, I was fast-forwarding, when there was no music; and then I said, “I’m gonna watch the whole thing, to see what’s it’s about!” And I realized it’s really great actually. It’s a little bit like a caricature sometimes, because everything, the emotions and everything are ten times bigger than in real life…After you’ve seen two or three of them, it’s OK, you’re ready. It’s very long; each movie is 3 hours long, at minimum. And it’s always the same story. It’s funny because these movies show a not very modern society, where girls can’t marry whoever they want, where parents say: “You’re gonna be this!”, but every time, in the end, the modern aspect wins. And that’s really strange because one could think that after 20 years of that maybe something has evolved, maybe these movies have changed the society, but apparently they didn’t. It’s always Romeo and Juliet, and a bad father that says “No” to his daughter, and it’s always – that’s the thing I love with these movies – a girl who saves the situation. Usually the mother, or the grandmother, or an aunt, and she’s the modern person of the movie and she settles everything. They deliver a very good message. I love Bollywood! I’d love to be able to go to India in a movie theatre and watch a Bollywood film. It’s something that exists nowhere else. Each movie comes with a record, and first they show the songs to the people, and try to attract them with the songs…I really like it.’’

main photo credits: Marc-Antoine Serra
*on the right, the audio version of the interview, for Radio Control.
**thanks to Beatrice Sommer and Victor Stutz for the input.
***thanks to Acid Arab for playing an edit of a song by Surorile Osoianu

Nicky Siano - a vision of disco

Nicky Siano talks about the golden age of disco music. Love is the Message.

Automat - This is a Berlin Affair