Born in 1924, Anatol Vieru was a music theoretician, influential pedagogue, and a leading Romanian composer of the 20th century. A pupil of Aram Khachaturian, he composed seven symphonies, eight string quartets, numerous concertos, plenty of chamber music and three operas.

The music of Anatol Vieru occupies a curious middle ground between the age-old and the ultra-new: his initial musical impulses were born of the Romanian folksong he heard around him as he grew up, though he soon evolved towards the mainstream of European modernism. Vieru’s earliest songs draw heavily on traits typical of Romanian folk music, for which he harmonized popular melodies and texts.

Vieru was born in Iasi, in 1926, where, during the Second World War, he and his Jewish family were interned in the ghetto. Although they were beaten up, they were not shipped to the concentration camps. After the war, Vieru was able to continue his interfered education and attended the Bucharest Conservatory between 1946 and 1951. His teachers from that time were amongst some of the most important names in Romanian music: he studied harmony with Paul Constantinescu, orchestration with Theodor Rogalski, composition with Leon Klepper and conducting with Constantin Silvestri.

Vieru said of himself: "I refuse to be called a vanguard composer (sometimes I am ahead of the vanguard and sometimes behind it)... Starting from the neo-modal example of the new generation of Romanian composers, I have developed and built out of it the microstructures of my own music...My ambition in my mature work is to generate complex musics with an ever-restricted vocabulary." Vieru's orchestration, mirroring his marriage of ancient modes and avant-gardism, often integrates traditional Romanian instruments, such as pan-pipes and dulcimer, into the modern symphony orchestra.

Anatol Vieru was also an important composer of film scores, making music for nine films throughout his career. Notable scores include those for movies such as "When Spring is Hot" made by M. Saucan in 1960, "Ciucurencu" (by E. Nussbaum) in 1964, "The White Trial" by I. Mihu from 1965, "Felix and Otilia" (by Mihu) in 1974 or "The Great Lonesome" in 1976.

Vieru’s works include an avant-garde opera, vocal-symphonic works, chamber music that includes important string quartets, choral pieces, music for films, orchestral works, and art song. His compositions have been performed in Romania, Israel, Europe, and the United States. His concepts and transformation of modes appealed to mathematicians worldwide, and became the subject of Vieru’s doctoral dissertation at the National University of Music, which was later published as Cartea modurilor (The Book of Modes).

Tune in! We're also on SoundCloud 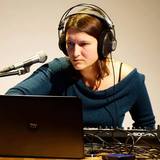 Romanian singer, musicologist and journalist, Maria Balabas runs her own radio show Dimineața crossover on Radio Romania Cultural, being one of Romania’s female voices who spreads diverse contemporary music all over the country. She is interested in new forms of radiophonic creation, as well as music composition and sound design.