Horațiu Rădulescu invented the spectral technique of composition (as a synthesis of Byzantine and Hindu music, sound itself and nature) even before he left Romania in 1969. He disliked the term spectral music. His music was incantatory, ritualistic, he believed in beauty as a salvation for society, he wrote for posterity. He was mathematical, poetic, magical. He was occult, he was Pythagoras. From what I can gather, he was - as other Romanian composers of his generation - a man of the world with a cosmic approach and ego.

I've been searching for Rădulescu for many years. I listened to all the recordings I could find and I think I found most of his officially recorded music. I've read interviews, admired his texts (part conceptual/part prose composition), gazed at his scores. There's so much more than that which escapes me, I know. I'm good with that. I regret I've never seen his music performed live. Probably his works are heavily under-performed and under-appreciated and this is due to the non-occidental form in which they are created and exist.

Neither he, nor other Romanian composers of his generation had access to political power in music (did they?), they were fighting what they call the mafia (whatever that may be) and still are. They're too peculiar and too individualistic. They started together and then they turned against a collective present. Romanian artists don't stick together. They were opposed to the Academia, they didn't create a Romanian Wave or a Romanian School, and in the end I love that about them, no matter what the reasons (and their reasons) are.

This text is not apologetic. This music is hardcore! This mix was very hard for me to do because this search for Rădulescu went through different stages, at one point involving a big yellow rubber duck called Horațiu. I'm not a music collector, I'm not a musicologist, I'm not even a fan, these sounds just travel instantly and unfiltered to a very deep place of my mind and tear everything to pieces, oh yeah! I eventually dissed any selective method or criteria and I pressed Rec and play and stop Rec after the last piece, Exil Interieur III, a Bucovinean doina, a testament to his immense love for his native land but not for country.

Coming from and going towards the eternal (the outer time) the music creates into the time a magic state of the soul. This is its single aim and reason to exist. (Horațiu Rădulescu, Sound Plasma).

Special thanks to David Shively and Either/Or Ensemble for performing and providing us with the recordings of Aur Pulsars, Kai Hong's Diamond Mountain II, Exil Interieur III, The Origin, Eterno. 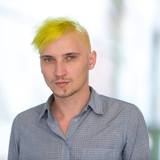