Since the start of Perestroika-era and then after Chernobyl disaster, rock music in Ukraine began to prosper all around. Officially mostly forbidden before, heavy metal and punk rock increased to the level of youngster's lifestyle music unofficially. By the end of the 80's the number of rock music festivals all over Ukraine and the whole Soviet Union was growing largely, so the dozens of bands with different styles and genres came to the stage; mostly to shock or to entertain.

Unlike the main Soviet cities - Russian Moscow and Leningrad (now St. Petersburg) - Kyiv's rock bands never had official vinyl releases in the country. Only mainstream TV and stadium acts like, for example, the band Display did. The most bands or musicians in this mix are the second and third waves of Ukrainian Independent/Underground/Experimental/Whatsoever music. In the last years of the USSR, some of them were gathering around Post - Rock Club creative movements like "Rock-Artil" (Kyiv) and "Novaya Scena" (Kharkiv). The most prominent activities of these musicians were in tune with the first years of Ukrainian Independence.

The sources of inspiration for some of the artists were wider than just music of their Anglo-American new wave and post-punk contemporaries. The field ranges from Avant-Garde and Minimalist music to Medieval and Renaissance composers and various traditional repertoire, including Western European, Central Asian and of course, Ukrainian within the other Slavic ones. It was the time when musicians were working closely with the local art, cinema and theater.

After the years of creativity and opportunities to bring experimental efforts to the wider audience in late '80s/early '90s, it all started to become more obscure. In the mid '90s the rave culture came in and many musicians turned to "hometaping" or went seeking a better life abroad, due to Ukrainian economical crisis. Unfortunately none of the artists that you may listen to in this podcast's episode had become widely famous or popular. Most of them earned a cult status within the certain circles of rare music lovers, not only in Ukraine. For example, Svitlana Nianio from Cukor Bila Smert' has performed her first live show for years in Glasgow, Scotland this spring. Vasily Goidenko of Kollezhsky Asessor has been composing music for theater in Vienna since the '90s, and the works of Lviv's Ihor Tsymbrovsky were re-released on vinyl in Germany. There are also many original bands and artists that weren't mentioned here. Some of them went more straightforward rock, some goth, some mainstream and some in their own respective genres.

The mix below consists of records released on Polish imprint Koka Records, Hamburg-based label What's So Funny About.. and a number of archival tapes from private collections. Many thanks to Sergey Myasoedov, DJ Derbastler (Ritmika Records), Dmytro Kurovskiy, Serhii Harahulya, Dima Silich, Alexandr Klochkov and the Internet.

The list was subjectively compiled by Ivan Shelekhov and contains music by artists from Kyiv, Kharkiv, Chernihiv and Lviv. The songs were performed in Ukrainian, Russian, Latin, English, Nonsense English and Purely Nonsense languages. 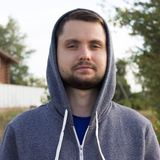 Ivan Shelekhov is a music enthusiast from Kyiv, Ukraine. He is mainly interested in experimental and regional music from all over the world, and its existence within a culture and society.