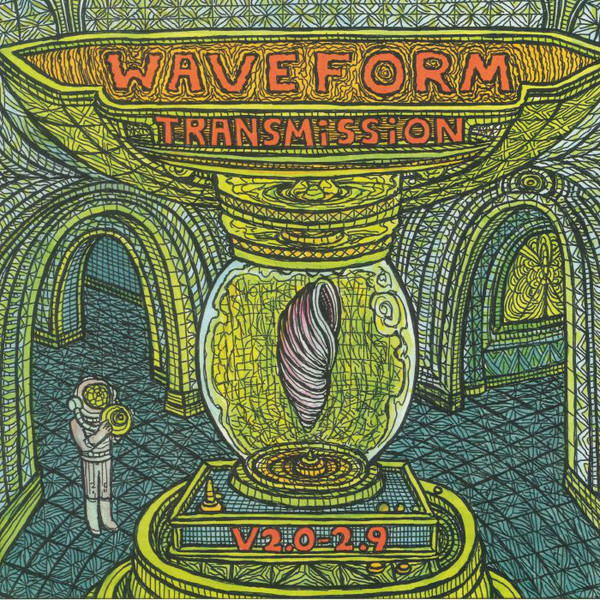 Astral Industries’ latest release marks the return of Waveform Transmissions, Rod Modell’s collaborative ambient project with Chris Troy. Each 18-minute record side contains two ambient tracks (except for side C, which squeezes in four), one blending into the next. It’s an engaging, evocative album, taking the listener on a journey through a nighttime landscape.

In 1996, Modell and Troy released V 1.0–1.9, a ghostly suite of soundscapes assembled and broadcast live from the basement of WSGR 91.3, a college radio station in Port Huron, Michigan. In those nine recordings, waves of analog warmth float alongside radio static, field recordings, and unearthly shortwave radio transmissions. The result is unsettling and haunting. Or rather, haunted — according to the liner notes, Chris Troy’s contributions include “recordings of the dead” and “field recordings made during periods of highly-charged paranormal activity.”

Two decades have passed since this initial offering, and the ever-prolific Modell has kept busy. As Deepchord, his explorations of subtly shifting textures and layered aural spaces have evolved over the years. While still bound to minimalist rhythms and looping fragments of melody, 2011’s Hash Bar Loops and 2014’s Lanterns are complex, polyvalent collages. Both of those releases find Modell weaving field recordings into atmospheric soundscapes meant to evoke specific spaces and times.

But Modell is only one half of Waveform Transmissions, and his co-conspirator is more of a mystery. Chris Troy can be found on YouTube with the username DETROITtimeLAPSE, and he has posted a few ambient tracks there, described as live recordings from a 2009 performance in Port Huron. Judging from this limited sampling, he shares Modell’s bias towards analog warmth, building subtly textured synthesized landscapes that gradually evolve.

And while V 2.0–2.9 fits easily into Modell’s catalogue, it could well be Troy’s influence that lends the proceedings a more protean quality than a typical Deepchord release. Over a background of simple melodic loops, waves of softly crackling static and warbling synthesizers fade in and out of view. There are moments when different loops and echoes align in a consistent beat, but most of the record is an abstract, arhythmic wash. Field recordings, submerged in the mix, create an illusion of physical space.

The strength of the record is this ability to evoke a physical environment with such detail. These repeating melody fragments and polyphonic waves of sound are deceptively simple; interwoven in each piece is a highly choreographed web of sound, echoing and crackling and chirping in vast subterranean spaces. The listener moves gradually, from aquatic caverns to industrial deserts; warbling water is replaced by metallic clanging, which slowly fades to calling birds.

The first Waveform Transmission release was a live improvisation, and that’s part of its rough, haunting charm.

V 2.0–2.9 is, by contrast, a masterful and polished suite. It’s a warm and inviting listen, and like any ambient release worth its salt it rewards attention and distraction in equal measure.