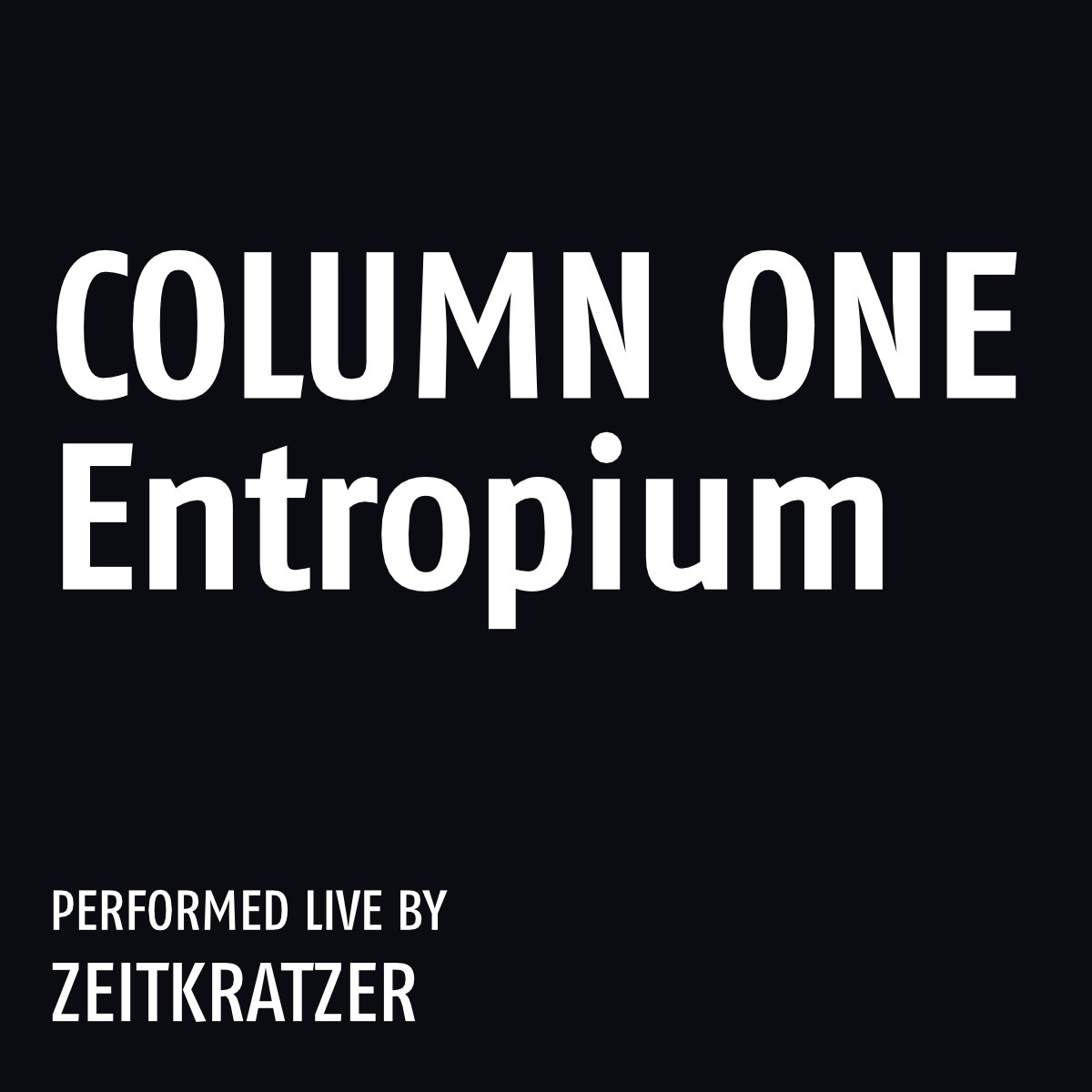 ***scroll down to listen from bandcamp


Entropium is not an easy term, phonetically and eidetical and although we probably heard of its sound-alike nihilistic notion of entropy, the title is a phonic double entendre and rather than delivering a sense, it delivers a clinical, synesthetic experience. Another paronym of this word, entropion is a condition in which the eyelid is rolled inward toward the eye. It can occur as a result of advancing age and weakening of certain eyelid muscles. Entropion may also occur as a result of trauma, scarring, or previous surgeries. And whether entropy is too much a general, loose, notion to judge an electroacoustic record by, it is indeed by the keywords inward, eye, trauma, scarring and surgery that we might further guide our journey through the surreal sound feast that ensues in five chapters, throughout this Zeitkratzer rendering.

This piece is a live play in the vim of zeitkratzer, of the opus pertaining to Berlin-based electroacoustic / industrial philosophical collective of cultural challengers, Column One. It has been released at Karlrecords, a label where pioneering sound experimentalists like Steve Reich or Morton Subotnick coexist with younger innovators like Aidan Baker or Philippe Petit of Pandemonium Records.

As the album info reports, Column One and Zeitkratzer first worked together in the late nineties at Podewil, which was at that time the most influential and vanguard location in Berlin. The scores below were all written by Column One’s mastermind Robert Schalinski, transcribed and arranged by Zeitkratzer and performed at the Berghain in Berlin during the 2012 MaerzMusik Festival. Picturing this “industrial musique concrete” sonic itinerary being performed at Club Berghain is a bit of a spoiler, in the way this format concentrates conceptually both modern and early avant-garde perspectives on decadentism.

The first piece, “Panthera” blasts intimidatingly and sharp to the point where you get to not know for sure whether the screeching, metallic wails are the utterance of a deep-rooted, animal longing or a petrifying signal of attack. This rather short opener strikes a certain emotional area where being fearful and empathic become easily confused as relative expressions of an inner representation of pain.

“Sol” comes into shape and substance from a high pitched drone of strings and air, sustained throughout the composition until it becomes a weird comfort zone that seriously alters your average vision of a solar affair. The song grounds itself suspensively through unpredicted beats and noises drifting relentlessly from tense, recurring climaxes to psyched out moments of distension.

The third piece, “Vilde Navareske”, is a direct reference to “Berta Navareske”, the fifth track on Column One’s Präsident Der Sonne record, out on Moloko+ in 2010. “President of the Sun” [Präsident der Sonne] “of the Moon & the little Earth (inner surface)” is claimed to be one of the titles that DADA artist and dadasophe Raoul Hausmann displayed on his visit card around 1919. True to this reputation, Column One attempt an archaeological approach, putting out ten pieces assembled by relatives and descendants of the DADA clique to gravitate around the proverbial “First International Dada Fair” that opened on the 23rd of July 1920 in Berlin. Unlike the former “Berta Navareske” on the above-mentioned album, with its ever-ticking rhythmic theme and its Russolo-esque dry minimalism, the Zeitkratzer approach is meant to pump density and substance into the original raw tempo that keeps ticking in the back of the multilayered, noised up consonance. Apart from giving the track an angsty sense of time, the obsessive cadence is creating the claustrophobic sense of an interior, hinted by the acoustics and the nervous vocal counterpoints intoning distressed sound poetry in old school Dadaist vernacular.

“Handhilse” comes up with a narrative going on many levels of the sound spectrum. It gives a highly improvisational feeling to begin with and it draws awareness to the many personas being performed at the time and space of the recording as of keeping a dialogue, all rules of communication taken into account and deconstructed to noise. Everything comes together in a glorious, unified drone coherence which at times wears out to reveal a pastoral whiff of wind instruments and watery electroacoustic sounds. The comedown of this extensive trip is “Lade”, which reveals a fragile layering of high pitched shrieks and screeches.

This album is a hyperlink candy, given the fact it immortalizes the chance meeting of two collectives of artists who stand at the core of the electroacoustic tradition branching out from there throughout a cut-up medley of popular, philosophical and (new) media influences. Column One (Rene Lamp & Robert Schalinski) started up in the early nineties doing short films and have always been a collective, rather than a strict music ensemble. They are known for taking influence from radical constructivism, film and pop terrorists such as Psychic TV (the albums released in collaboration with them, “E-lusive” (1997) and the more noisy soundscape of “Vis Spei” (1995) prove it).

Zeitkratzer, on the other hand, is a collective that has been exercising its bold approach to abstract acoustics for two decades now, completing collaborative works with iconic noisers such as Merzbow or William Bennett (Whitehouse), electronic musicians like Carsten Nicolai and Terre Thaemlitz and even Lou Reed, whose “Metal Machine Music” they take and blow up to clamorous proportions. These guys are very active in the highbrow sector, doing reinterpretations of Schönberg and Bach, performing compositions of Helmut Lachenmann, James Tenney and Karlheinz Stockhausen, always keeping it noisy, loud and polished.

But in the end, what this boils down to is the point-blank intensity by which these tunes effortlessly drag you through various areas of your psyche as an exercise in introspective therapy.