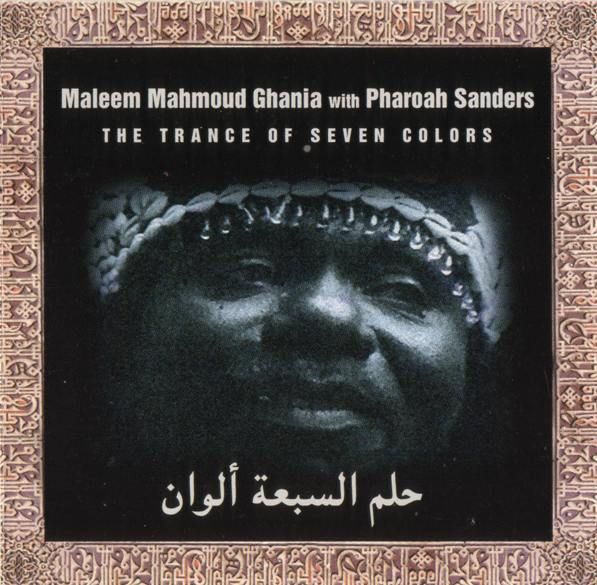 Mahmoud Ghania was born in the city of Essaouira in Morocco, on the Atlantic coast. He is the second son of the master of Gnawa music, Maâllem Boubker Guinia (who lived between 1927 and 2000) and the famous clairvoyant and "moqaddema" A'isha Qabral.

This is a totally special album. It is called ’Trance of Seven Colors’’ and is one of the most important albums of Gnawa trance music released in the ‘90s. Not only that it was recorded and produced by Bill Laswell, but what makes this release even more remarkable is the collaboration with legendary jazz saxophonist Pharoah Sanders, described by Ornette Coleman as "probably the best tenor player in the world." Sanders is present on almost each recording on the LP (made in Morocco, June 1994), but there are also certain songs where the music is the Gnawans' vision. We can mention tracks such as ‘’Salat Anbi’’, ''Bala Mousaka’’ or ‘’Casa Casa Atougra’’. But Pharoah has his own moments too, especially with the song ‘’Piece in Essaouira’’, dedicated to the memory of long time partner Sonny Sharrock, figure legend jazz guitarist, who died in 1994.

The album itself is an amazing journey through free jazz, fusion, tribal and trance Gnawa music. Take your time to enjoy an extraordinary and complex LP, with music that could best be described as ‘healing music’. The combination of different harmonies played on guembri (a traditional three stringed skin-covered bass plucked lute used by the Gnawa musicians) with Pharoah’s (sometimes) brutal and sublime interventions make this record a totally adventurous trip.

Not only is this going to boost your boring day, but you’ll be totally healed after a few auditions. It's approved by the Maleem (i.e. master).