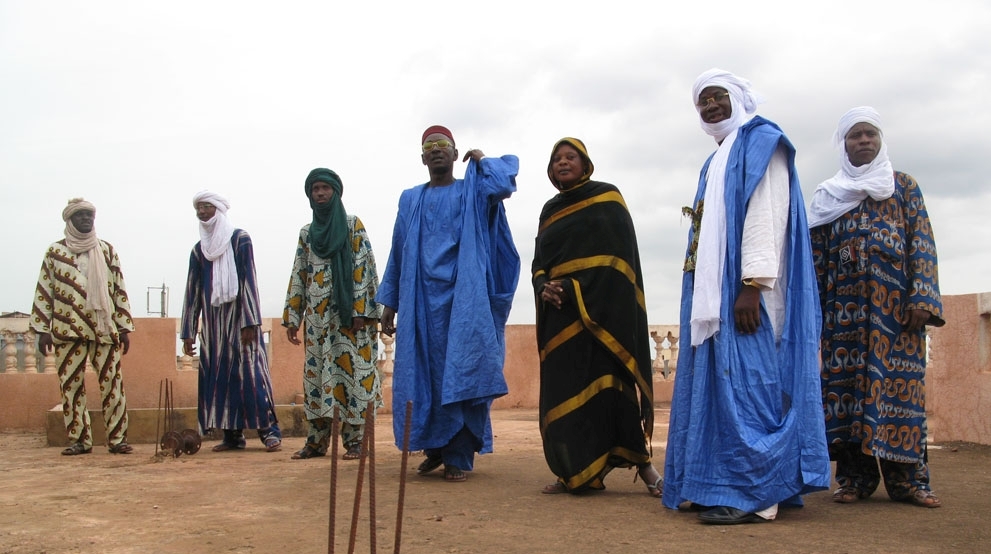 "Super Onze are the real roots of desert blues – Mali’s equivalent of Congotronics. This is how it all sounded before the electric guitar came into the equation: Super Onze play amplified ngonis with virtuoso and hypnotic melodies, their raw, impassioned bluesy singing hangs over heavy takamba beats on calabash percussion. After 40 years of playing at weddings and child naming ceremonies around the desert, this band rocks – not to be silenced. The real soul of Mali’s northern desert." Lucy Durán, School of Oriental and African studies, BBC Radio 3.

There is this grand unknown musical phenomenon in West Africa. It's called Takamba. It's a musical style played by Tamasheq and Songhai. The word takamba means "your hand". It's an originally seated dance, very eloquent with the arms as the dancer obviously only uses the upper part of his body. The dance is used for courting, or just dancing, on weddings, circumcision feasts or just any party.

Super Onze of the city of Gao is Mali’s most renowned and refined Takamba band. They exist since 40 years and the members come from griot families. This means that they are musicians since generations and they live of playing at weddings, birth- and harvest celebrations. Despite the fact that they didn’t release one official cassette or CD, they are known in the whole of Mali, being of great inspiration to Mali’s major and worldwide known artists. And that is not the only reason they are a regular at the famous Festival in the Desert were they used to warm up the crowd for the late Ali Farka Toure. Their music sounds quite like Touareg music but it has got somewhat more groove and lyrics and they belong to the Songhay, one of Mali’s 5 tribes.

“Both the city of Gao and the takamba style itself sit neatly and squarely on the frontier between two cultural spheres: the ‘white’ Arab / Berber culture of North Africa and the black African culture of the Sahel and beyond.”

The music is played on ngoni’s (plucked lute) and percussion on gourds. The Ngoni sound and vocals are enhanced by two vintage bullhorn speakers. Try and imagine the lope of a camel combined with the flow of a vast sedate river and you’ll be getting close. This beat is locked down by one or more players of the calabash, a species of over-sized died out pumpkin gourd that sounds like an entire drum kit in the hands of skilled player, with its deep booming bass thump and rattling ‘hi-hat’ click. Atop this sedate beat come the ngoni players. The ngoni is a three or four stringed lute.

The Songhai call it the kurbu, and the Touareg call it the teherdent. With generous historical license you could call it the great granddaddy of the blues guitar and you wouldn’t be too far wrong. The takamba musicians play the ngoni sitting down, with the instrument lying on the floor and one knee pressing down on its body, as if they’re taming a wayward animal. With their flowing bouboul robes and heads enveloped in a cheche or turban, the ngoni players cut a cool debonair figure as the notes flutter and fizzle out of their fingers in a bewildering bluesy stream. In the last three or four decades, the ngoni has usually been stuck through an amp and a pair of deliciously distorted speakers.

Super Onze employ the vintage bullhorn variety. This gives the music a modern punch and grimy edge that could easily rival The Velvet Underground or The Jesus and Mary Chain. Sometimes the ngoni is substituted with an electric guitar thus sealing its contemporary transformation. The final layer in the takamba sound is the praise singer, the lead vocalist who directs proceedings.

Takamba is a generous music. Its role is to make people feel important and happy. The lead vocalist will praise the bride’s beauty, the bridegroom’s strength, the illustrious lineage of the bride’s mother, and the great deeds of the bridegroom’s father. He’ll tell stories about the guests or recite ancient tales of love and bravery, compliment dignitaries for their honour, their astuteness and their generosity, making sure that the power structures that underpin society are recognised and reaffirmed in joyful music. In that sense, takamba, like all praise-music, has a very political and social purpose, which it fulfills in an understated non-confrontational manner. 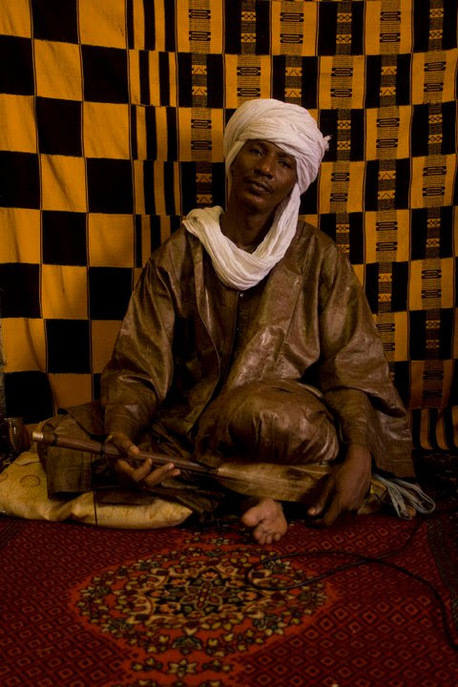 And then there are the dancers. Unlike takamba, the wild gyrations and flailing limbs of many other Malian dance styles. Takamba moves are all about dignity, restraint, undulating limbs, covert smiles and trysting eyes. The dancers generally form two orderly lines which face each other, one for the women and one for the men. Sometimes they stand, sometimes they’re seated. The more traditional mode is the seated one, which places further restrictions on unseemly bodily movement but intensifies the subtle beauty of the dance. Takamba dancing is a metaphor for flowing water. It’s the body’s hymn to the river, the source of all life. All passion, all excitement is subsumed in its gentle undulations. But those passions still lurk beneath, just like the currents of the great river. That’s why some swear that takamba is the most erotic dance form in the whole of west Africa, albeit eroticism of the subtlest kind.

Both the city of Gao and the takamba style itself sit neatly and squarely on the frontier between two cultural spheres: the ‘white’ Arab / Berber culture of North Africa and the black African culture of the Sahel and beyond. Although the Berber Kel Tamashek, or Touareg, and the black Songhai people have long been adversaries and have even known periods of open conflict in the past three decades, it’s common for takamba groups to feature both Songhai and Touareg musicians. For that reason, takamba is a potent and valuable bridging style, which stretches hands out across a fundamental cultural divide, and invites them to shake and make peace. 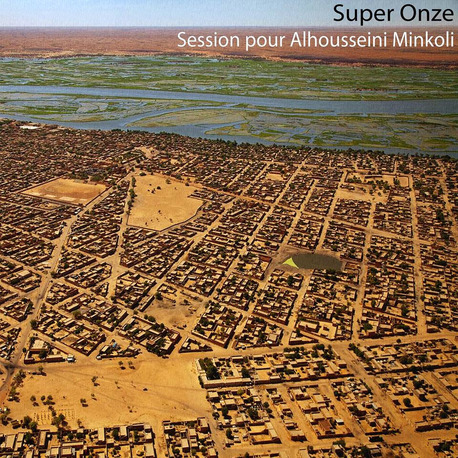 Alhousseini Minkoli was a rich tailor, soray, living in Gao, and a lover of takamba music. Recorded in Gao, Northern Mali, 1994
Super Onze de Gao was founded in the early 1980s by Haziz Toure, Asaalya Samake and Agita Moussa Maiga, who became the group’s first president. All three were Songhai men from Gao. In the venerable tradition of so many West African music ensembles, Super Onze was created in order to entertain at community celebrations, preserve traditions, propagate culture and create a kind of ‘club’ or community organization which could support the needs and nurture the talents of its members. In other words, it was more than just a ‘band’ in the European sense of the word. The founding members are still alive, but now it’s the next generation that fills the active roles in the group. That’s another advantage of their typically African orchestral structure. It doesn’t depend on any individual or person for its survival, and can thus better cope with the passing of time.

Initially Super Onze de Gao played in their own homes, a few times a month and especially on Fridays, the day of prayer and rest in the Muslim week. From the beginning they concentrated strictly on the takamba style, and were soon a popular feature of local weddings and festivities. In 1985 they gave their first ‘official’ non-festive concert, at an election gathering in Gao.

Super Onze’s leading ngoni player is Yehia Mbala Samake, son of Asaalya Samake. Yehia comes from a caste of Songhai blacksmiths. The role of blacksmiths in Songhai and Touareg society is very complex and very important. They belong to an endogamous group, which means you can only be born a blacksmith, you cannot become one. Until recently they were responsible for making almost everything necessary for nomadic or sedentary existence: tents, swords, spears, camel saddles, leather bags and cushions, padlocks, cooking utensils and, most importantly, jewelry. They still make jewelry and many other artifacts. But the role of the blacksmith has never been confined to artisanal manual labour. They’re also storytellers and guardians of family histories and lineages. They’re often called upon to negotiate between two rival clans, and to arrange marriages. And it’s their duty to play music at feasts and festivities. As such, their role has many affinities with that of the Manding or Bamana griot.

*with passages taken from Super Onze de Gao - Champions of the Niger Bend by Andy Morgan, with kind permission from the author. 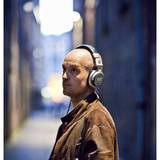 Horst Timmers is also known as DJ/producer mps Pilot and Matrub. He works intensively with Super Onze during their project Future Takamba, a multidisciplinary takamba theatre project which was touring in Europe. He is the founder of the Two Speakers label, based in The Netherlands.