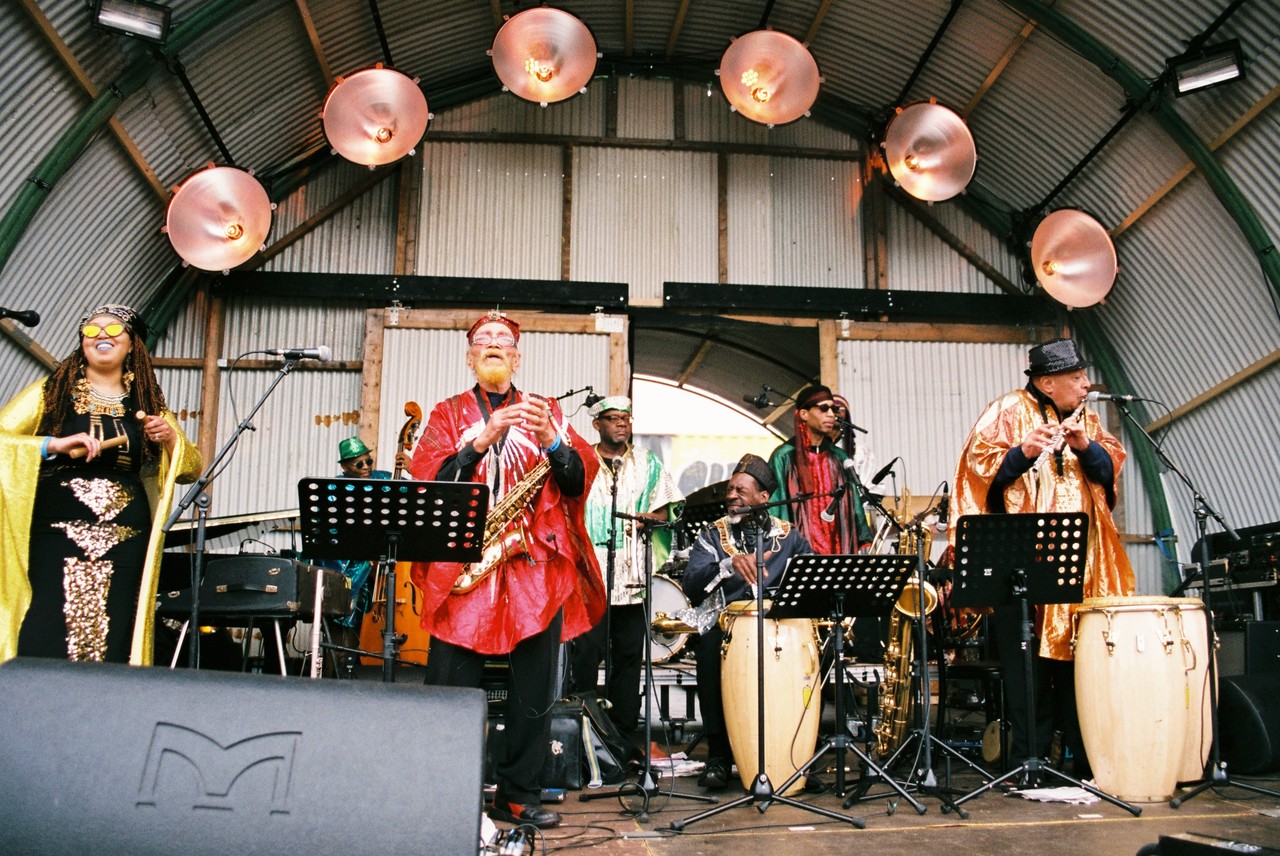 Peripheral Adventures at Strange Sounds From Beyond

As the warm months roll in, punters trade dark, sauna-like clubs or the outdoors. Terrace and rooftop parties pop up as indoor venues downsize their activity or close altogether. And, of course, festival season kicks off.

In the eyes of both insiders and party-goers, the excellent Dekmantel Festival is Amsterdam's signature summer gathering. But for a few locals and adventurous listeners, there is Strange Sounds from Beyond - a smaller, more intimate Sunday happening in the artsy De Noord, Amsterdam's Brooklyn.

Strange Sounds From Beyond is a platform that works together closely with The Rest is Noise, Red Light Radio and Rush Hour. The sophomore edition came with a more ambitious line up after last year's acclaimed debut. And those 20-odd live acts and DJ sets of the one-dayer were looking extremely promising.

One could define their eclectic line up as balearic, exploring the sounds on the fringes of the dancefloor, from African goodness, to weird electronics, free jazz and disco with a healthy dose of darker shades of new beat and electro. It perfectly embodies the spirit of Amsterdam DJs such as Antal or Interstellar Funk.

Unlike my usual festival experiences, I was going with a little group this time around. And, in true Amsterdam fashion, a pre-show visit to the coffee shop wasn't really a headstart. It also didn't help that in the general THC-indused confusion we've been waiting in line for the wrong ferry, as if the crowd of glitter-drenched, kimono-clad festival fairies wasn't enough of an indicator.

After twenty minutes of wandering through construction sites and industrial buildings, I could finally hear the distant echoes of Jah Wobble, The Edge and Holger Czukay's "Hold On To Your Dreams"- we were home. 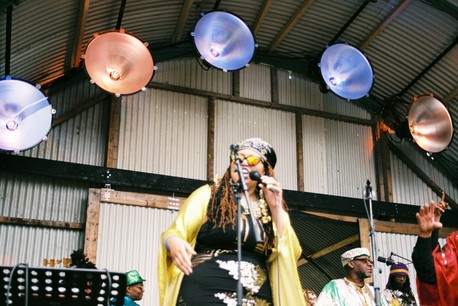 We got in just in time for perhaps the most anticipated performance of the festival, the legendary Sun Ra Arkestra. As any musical-loving teenager, Sun Ra has been the onding material for jazz and house heads alike, soundtracking many late nights.

The stage was actually much smaller than I imagined, comfortably cozy. As soon as I made my way towards the front, I found my long lost fellow dancer Robin, now blonde and DJing or the second time for the festival as Mata Hari. Her wide smile and swaying dance moves in her long Moroccan gown were enough to instantly get me into the collective trance happening in the first row.

The Arkestra as in full swing, sporting their signature Egyptian outlandish costumes and playing with the kind of passion you rarely see these days. They were moving swiftly through their entire discography, alternating heavenly passages with familiar vocal pieces and improvisational moments of tribal drumming. Down on the grass, the audience was going insane, climbing structures and inventing novel dance moves.

It all culminated with a general sing along to Space is the Place, although during their 90 minute voyage I also saw the trumpet players descending into the audience, the 60-sth percussionist doing back flips nd cartwheels on stage and the caped band leader performing skit on air travel that had him get off stage with a tiny suitcase and coming back on the other side of the venue.

It was a much needed dose of pure unadulterated sonic happiness. 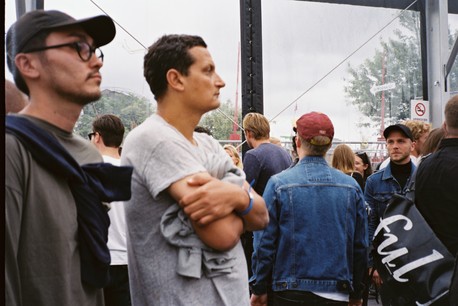 I went to the Red Light Radio stage to check out Orpheu The Wizard's set; the small amphitheater had a zen festive feel, with Buddhist bunting, a sandpit dancefloor and tons of people just chilling in the grass by the water. Dancers were going beserk to Orpheu's delicious disco.

I spotted Terekke dancing with his lady, sporting a rainbow shirt around his neck as I rushed to catch the last part of DJ Okapi's set.The Rush Hour stage was in a large transparent tent and the palm trees on stage gave it a greenhouse feel. Its large dancefloor was pretty packed, with revelers getting down to his signature selection of Afro synth. Even fort those familiar with his blog, he played that kind of set where you don't recognize any tracks but they all sound amazing and you want them for yourself.

Antal was attentively watching from the right side of the stage, when he saw me with my camera - "Oh, you're here! Are you gonna write a nice review?".

Olf have me a big hug before stepping into the booth. It was all like a big family reunion now. His set was a softer vesperal journey, playing my old synthwave favorite Farah's "Law of Life" in the first minutes. 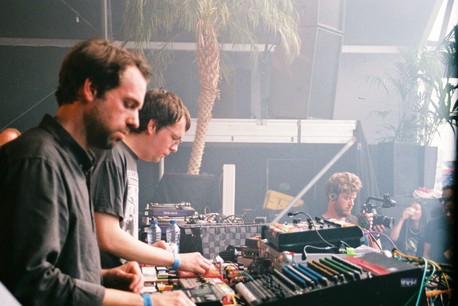 I headed to the main stage to catch Mim Suleyman on the main stage; Tako and Izabel were still DJing, doing a playful back to back.

The petite Zanzibar diva was a pure delight with her incendiary afro house and engaging performance - she danced, jumped, made jokes with the audience and delivered one of the best performances of the festival. It all culminated with her instigating the audience to "Fire fire I love you" along with her and one fan gifting her an actual doll.

She played an encore, but people kept begging for more, but their time was up unfortunately. Tako kicking off his set with Yellow Power's "Hi Samurai" made the situation more sweet than bitter.

Back at Red Light, Lena Willikens as just warming up; I've seen her in many contexts over the past couple of years, but this time she seemed to be really in her element.

By the time I went back to the Rush Hour stage, the place had morphed into foggy mystery planet, with people dancing behind the DJ booth De School-style. Due to last minute visa issues, Mutant Beat Dance had Beau Wanzer and new group member Steve Summers play without Traxx and rethink their entire set within 24 hours.

Despite these issues, their performance was a dark, trance-like ritual where haunting, distorted vocals and analogue synths formed dream sequences of Gothic psychedelia.

Daphni changed the mood back into disco territory, although a few tracks in he was straight up teasing the audience with a loopy old school Detroit track. His set was a masterful display of skill and timing, making the entire room vibrate in unison.

Black Merlin was playing a more meditative set as the dark clouds were darkening the horizon; he swiftly switched things up with a catchy techno track, just as the storm was howling in the distance.

By the time Vladimir Ivkovic was starting, the first drops of rain started. It wasn't long before the storm started getting more violent, with more and more people seeking refuge in the little tented DJ booth at Red Light. It was a cozy sort of Noah's ark, with DJs huddled together opening beers and bouncing to Vladimir's sleek selection

As it was starting to get dark, I finally mustered up the courage to brave the rain and go see Selda, a rare and much-anticipated performance. With flimsy rain coats and umbrellas, the crowd was dancing in the muddy ground. The Turkish singer was radiant and her energy contagious. A few songs in, I started shivering, my legs and feet completely wet; it was really heartbreaking to leave, but my body doesn't have any rain-repelling Dutch DNA. 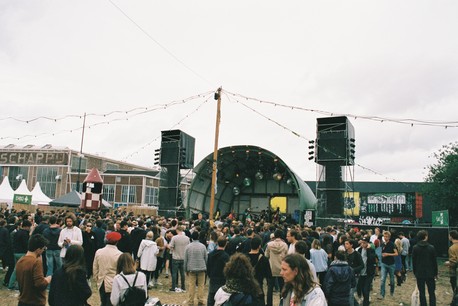 It was fully dark as I was heading over to the ferry, dreaming of a warm shower and hot tea. At the docks, the crowd of punters was struggling to catch a spot on the boat. It felt like an exodus.

I was happy to have experienced this beautiful, music-filled Sunday, although personally the three stage simultaneous formula was slightly overwhelming. For the most part of the festival, I felt like I've been constantly sampling things, going from one place to another, running into people and not really being able to fully engage. It also didn't help that after 6pm the festival saw a new wave of people coming and the grounds became almost too full. And, of course, my biggest regret was still the freezing rain and missing most of Selda's set.

However, this was as intimate an experience as festivals can be; I just wish they find a better solution for dealing with the moody Dutch weather in the future. I thought seeing a 70 year old Turkish singer energize an entire crowd dancing in the pouring rain would be a fitting ending for my article, but the gods had other plans for me.

Wet and cold, I was finally at Centraal Station, but ready to power through the train journey back to my host in Den Haag. As all commuter stories go, in the best case scenario you would rech your destination in a negligible amount of time but more often than not it ends up being much much longer.

That Sunday night, I watched as the display showed all the trains that would get me closer to my destination get cancelled one by one - I was now stranded until 5am.

Amsterdam proved to be like a second home, once again. Now I had my perfect ending.

What a relief and a celebration: to be back in total lack of control.