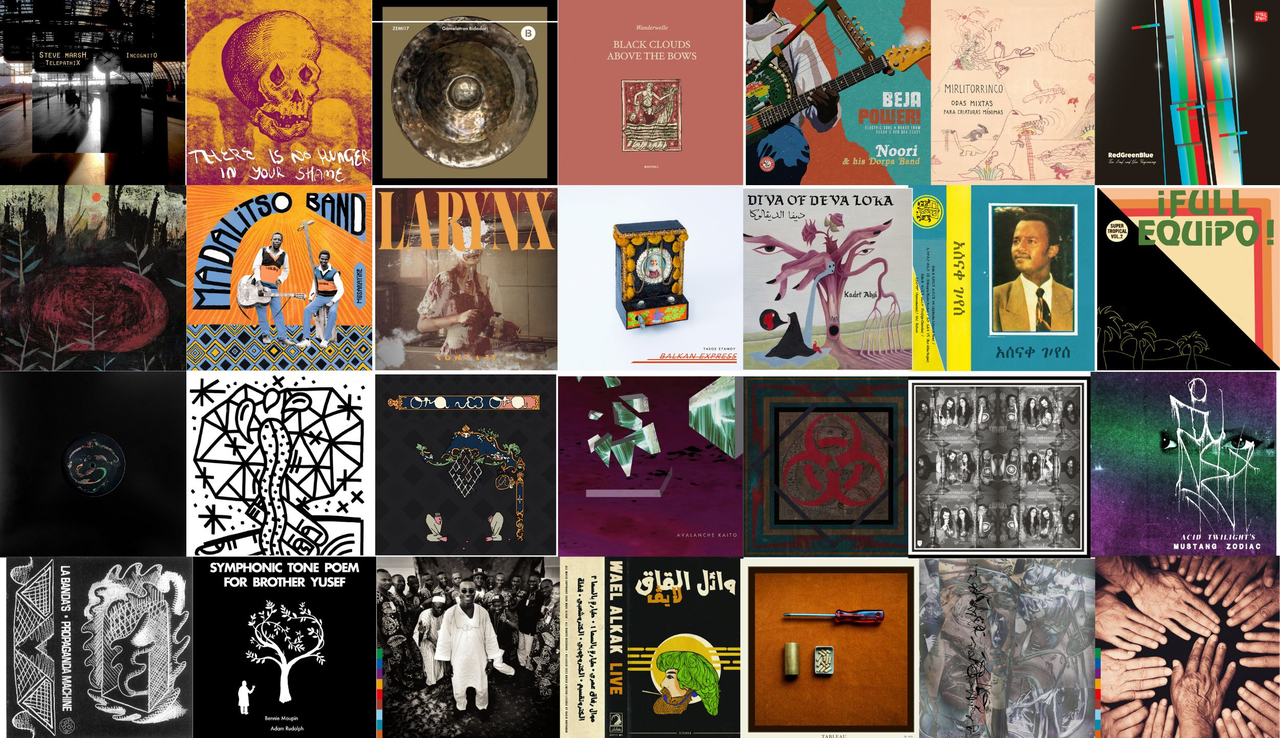 Summer is here, so check out a recap of 30+ albums and compilations released in June 2022, comprising anything from experimental, ambient, cumbia, African music, improvisation, electronic and more, both new and reissues.

From Avalanche Kaito to Builenradar 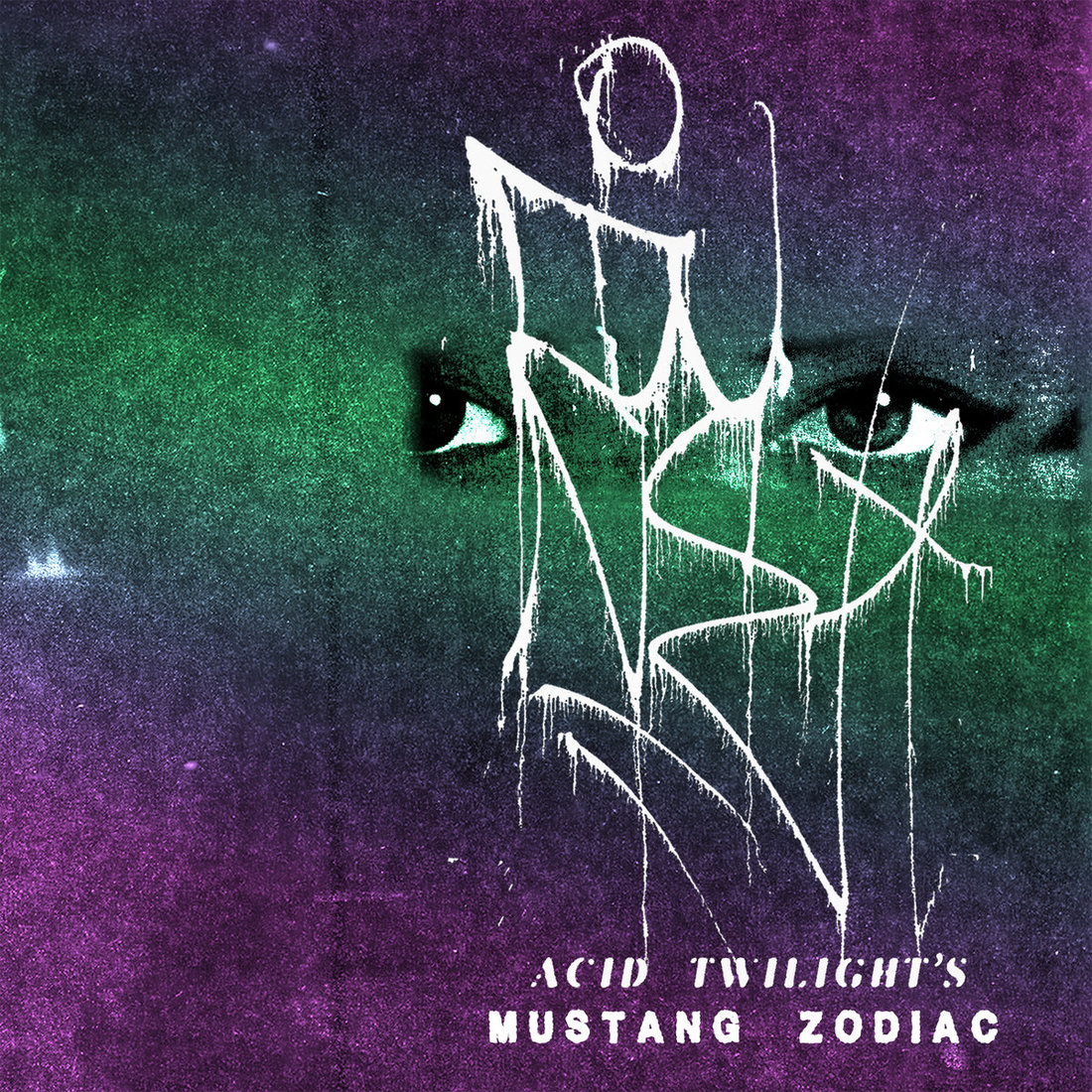 Avalanche Kaito - Avalanche Kaito (Glitterbeat Records)
Emerging from an original dimension in sound, the polygenesis Avalanche Kaito redefine what it is to talk with the ancients whilst leaping forth into a futuristic chaos of noise on their debut album journey. A palpable experience with each sonic blast, each layer a revelation, this simultaneously taut but expansive universe, in which the oral traditions of the West African griot converge with Belgium post-punk, exists in its own space. Urban griot and multi-instrumentalist Kaito Winse ((vocals, tama, peul flutes, mouth bow) fortuitously collided with Brussels noise punk musicians Benjamin Chaval (drums, electronics) and Arnaud Paquotte (bass) from the group Le Jour du Seigneur, after a friend of theirs in Burkina Faso played Kaito some of the duo’s pummeling music. Through a twisting sequence of events, the trio eventually met and began developing the soundworld of ancestral proverbs and dataist inspired technology that defines the album.

Badawi - Quintet Jazz Dub Sessions
Written during the aftermath of 9/11 in NYC, this album was recorded at One Soul Studios in 2003, featuring the configuration of the Badawi quintet at that time - Raz Mesinai (piano/flutes/percussion), Jim Black (drums), Shahzad Ismaily (e.bass), Okkyung Lee (cello) and Doug Wieselman (clarinet/guitar).

Builenradar - There Is No Hunger in Your Shame (School of the Arts)
Builenradar is the new moniker under which Belgian visual artist and musician Wouter Vanhaelemeesch performs his damaged post-apocalyptic bikerfolk. Previously known as Urpf Lanze, he’s been producing trance-like guitar boogie that takes inspiration from disparate influences since the early 2010s. 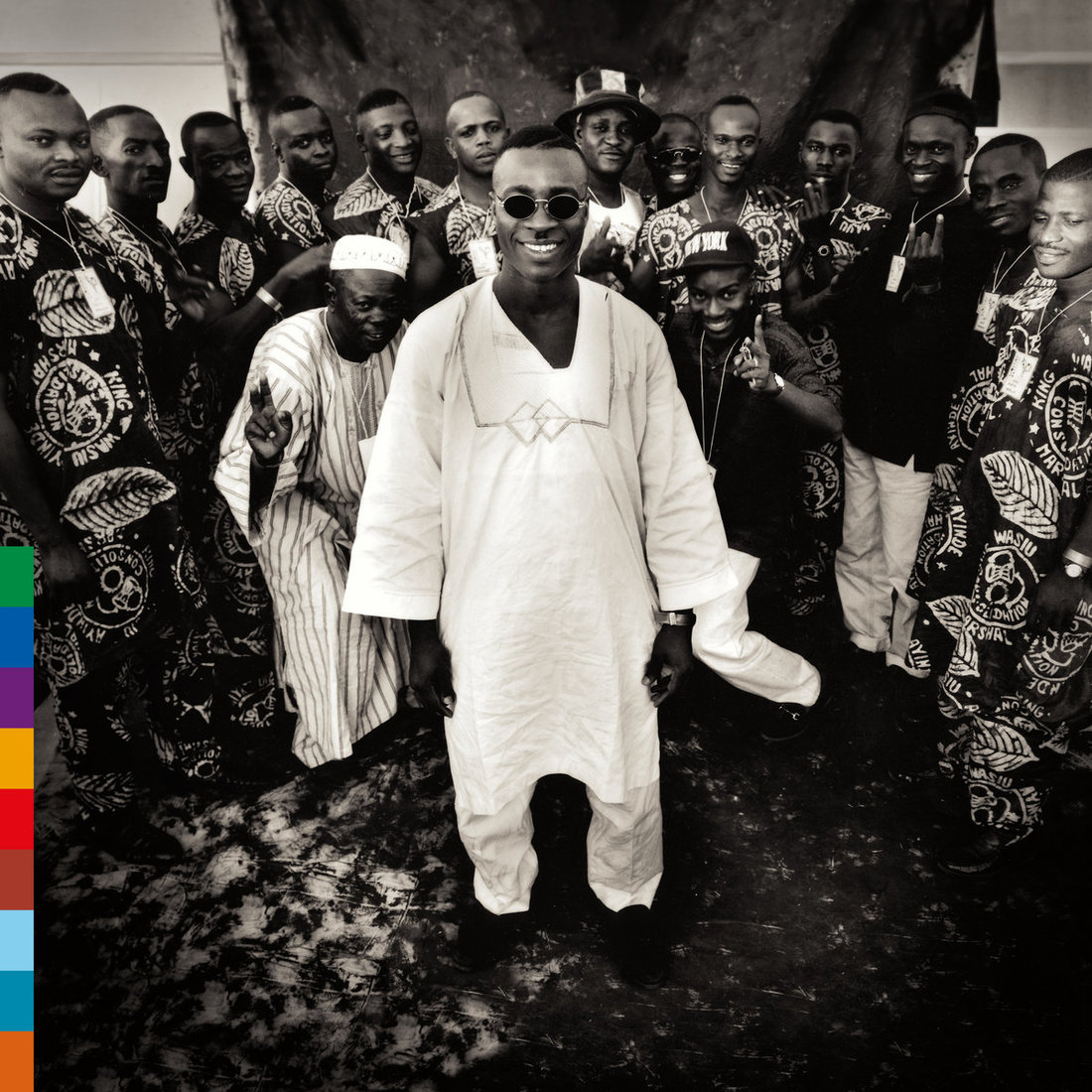 From Ennio Morricone to Kuntari

Chrisman - Makila (Hakuna Kulala)
On his debut album Makila, Chrisman provides an experimental vision of the taraxina sound: a molasses-slow fusion of the Angolan kuduro and kizobma dance templates that dips in-and-out of fuzzy drones and syrupy gqom.

Kadef Abgi - Diva Of Deva Loka (Akuphone)
Diva Of Deva Loka is music created from a collective consciousness unfolding in real time. The album has its roots in each musician’s sonic experience: this includes Arabic music —including most notably Moroccan Gnawa—as well as rock‘n‘roll, jazz and the avant-garde. Devin Brahja Waldman is a New York saxophonist, drummer, synthesizer player and composer.

King Wasiu Ayinde Marshal I - Talazo Fuji Music Party! (Real World Records)
Back in Nigeria in 1995 everybody knew King Wasiu Ayinde Marshal I. Just about every house party and club floor, every shop front and car window, pulsed to such megahits as ‘Talazo’ and ‘Consolidation’; to the percussion-rich polyrhythms and Yoruba chants typical of Fuji music, a genre this one-time roadie (for Fuji music icon Ayinde Barrister) had customised by adding more percussion — congas, the sakara frame drum — and an attitude straight off the street. 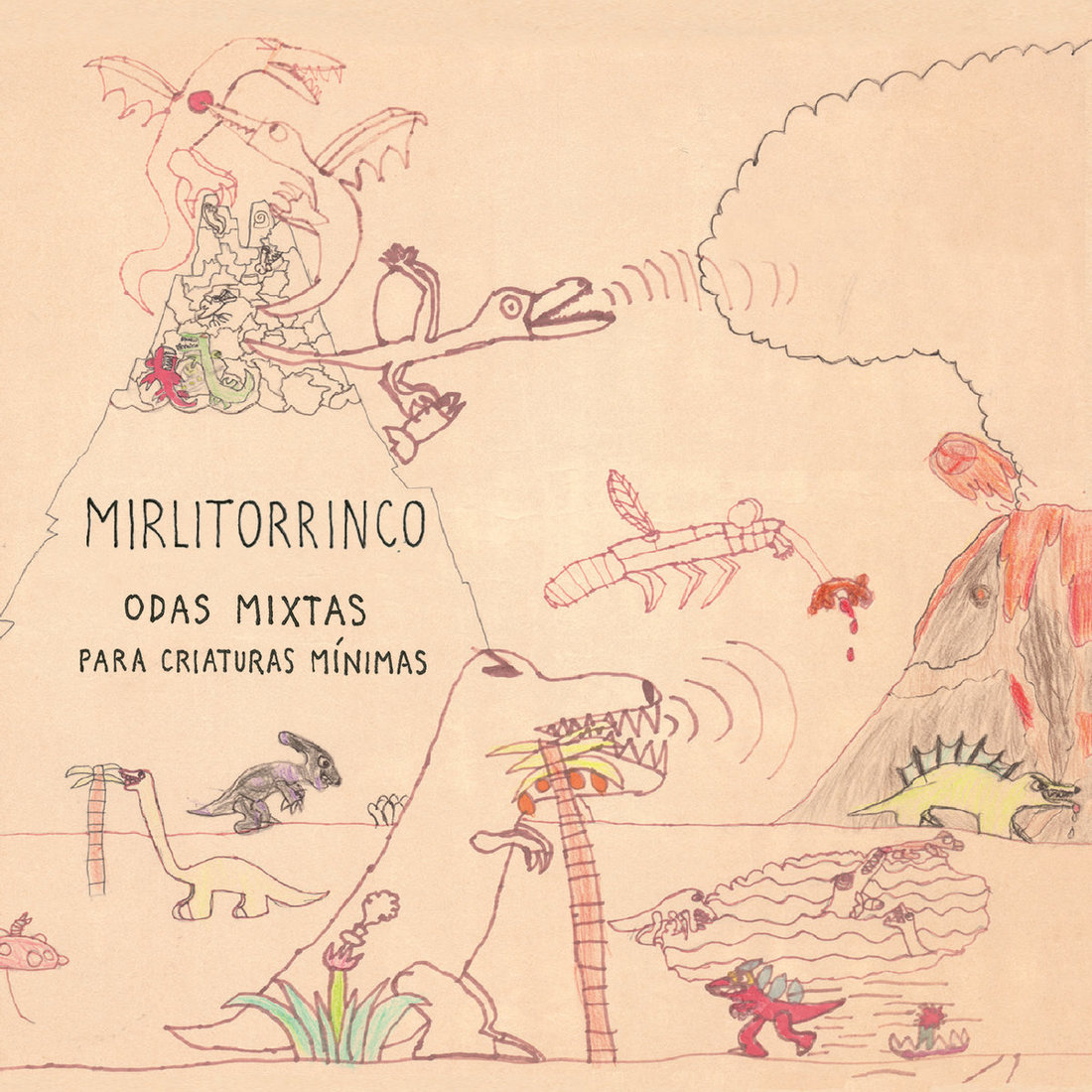 From Lloyd Miller to Mirlitorrinco

Lloyd Miller - Orientations (Fountainavm)
The exploratory, orientalist modes of Orientations will find easy devotion among fans of Ahmed Abdul-Malik, Sun Ra, and the pantheon of similarly oriented spiritual jazz stalwarts. Miller’s fascination with such modes runs deep. As a polyglot and expatriate artist who traveled the world and embedded himself in the cultures of the Middle East and Asia, Lloyd Miller manifests in such frankly unbelievable ways throughout history, and with such magical effervescence, that his musical presence is uncanny; his effect is extraordinary and literally haunting. Orientations provides a dazzling survey of this uncanny presence, over 22 recordings that span from 1960 to 2021. This material ─ all of which was sourced from Miller’s master tapes and sole existing personal recordings and appears here on vinyl for the first time ─ documents everything from performances on Iranian TV to recent collaborations with students at Brigham Young University.

Loris Cericola - Metaphysical Graffiti (Artetetra)
Metaphysical Graffiti is the new album by underground maverick and DIY mad-scientist Loris Cericola: musician and video artist based in Montecosaro, Italy. Besides his activity with Weird Tapes Records and Studio as well as with his multidisciplinary and audio-video collective Cerchio23, he has been the founder of projects such as Spirale and Vacuum Templi.

Madalitso Band - Musakayike (Les Disques Bongo Joe)
Musakayike, meaning 'don't doubt us', is the second international release from Madalitso Band under Bongo Joe Records. It's the duo shining and enjoying every minute of their time in the studio performing their upbeat music with joyful vocals, four-string guitar, babatoni and cow-skin kick drum.

Mirlitorrinco - Odas mixtas para criaturas mínimas (Dur et Doux)
A creature of a strange morphology and dramatic grunts, the Mirlitorrinco is a unique monotreme mammal. Crepuescular, hermaphrodite, polygamous, oblivious, and a deft swimmer, the Mirlitorrinco has been the object of study by many renowned twentieth century pataphysicians. 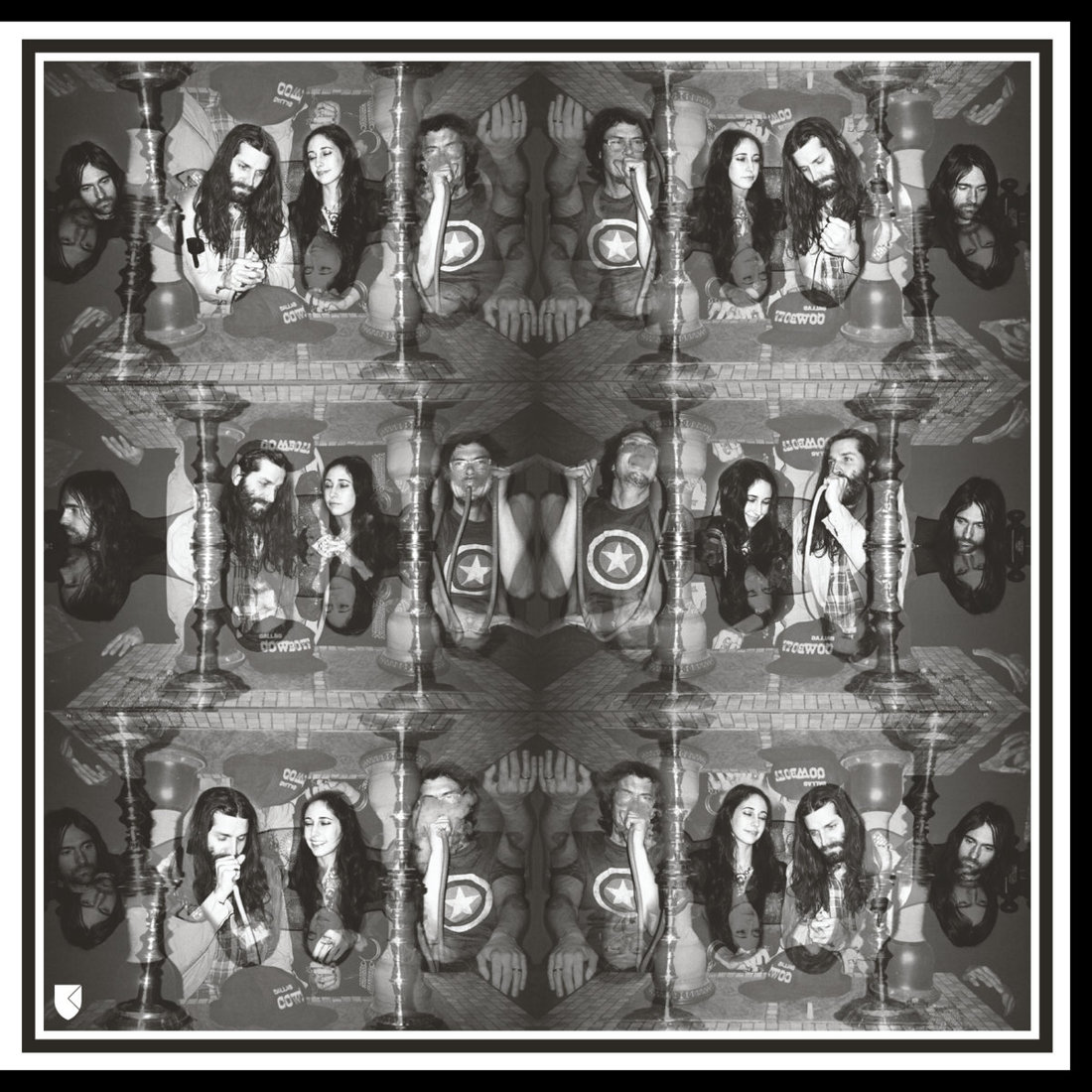 From Razen to Rolf Hansen

Noori & His Dorpa Band - Beja Power! Electric Soul & Brass from Sudan's Red Sea Coast (Ostinato Records)
This is a soundtrack of Sudan's revolution and the first ever international release of the Beja sound, performed by Noori and his Dorpa Band, an unheard outfit from Port Sudan, a city on the Red Sea coast in eastern Sudan and the heart of Beja culture.

Psychic Ills - FRKWYS Vol. 4.5: Nowhere in the Night (RVNG Intl.)
Psychic Ills and Gibby Haynes’ Nowhere in the Night is a document of sound bending, twisting, and stretching with the joy of collaboration and untethered aspiration. Psychic Ills, then the trio Tres Warren, Elizabeth Hart, and Brian Tamborello, first intersected musically with Gibby Haynes, then and forever the founding member of Butthole Surfers, when the two groups with Texas roots toured extensively in 2009, and next when the Ills invited Haynes to contribute to the fourth volume of FRKWYS, an ongoing series of intergenerational collaborations that began that same year.

Radost - P!ZD! (ТОПОТ)
Radost band (Joy in English) was born in 2015 after another coven in the Milyutinsky squat in Moscow. For the first rehearsal Peter Ototsky (Baritone Domination band) brought a pile of scrap metal and Evgeny Galochkin (TOPOT label) took greasy cassettes and a radio. (…) To raise questions is the everyday provocative nature of Radost, who from performance to performance tries on purpose to sound so ridiculous and unbearable that the listener’s cheekbones cramp. To finally achieve this goal, in 2017 Felix Mikensky (Brom band) joined the band and added a spoonful of noise to the barrel of chaos. Album P!ZD! was recorded in one take in August 2021. This is a wild, noisy and chaotic improvisation that randomly mixes poisonous sampledelica, mutilated Arab & Indian pop music, languid Russian rap and real punk rock.

Razen - Regression (Marionette)
Razen is the collective consciousness of core members Brecht Ameel and Kim Delcour, who since 2010 have realized themselves through virtuoistic and highly expressive improvisations with lesser-heard instruments. Experimenting with repetition of tones through controlled breathing and phrasing, Razen arrive at a synesthetic playground of auditory textures and colorful imagery.

Rolf Hansen - Tableau (Karaoke Kalk)
Tableau is Rolf Hansen's second full-length album under his given name and acts as a sequel to his solo debut Elektrisk Guitar, released in 2019 through Karaoke Kalk. On the 14 new pieces, the Copenhagen-based composer and musician further explores the sonic possibilities of the electric guitar by opting for a radically different approach and putting great limitations on himself as a performer. 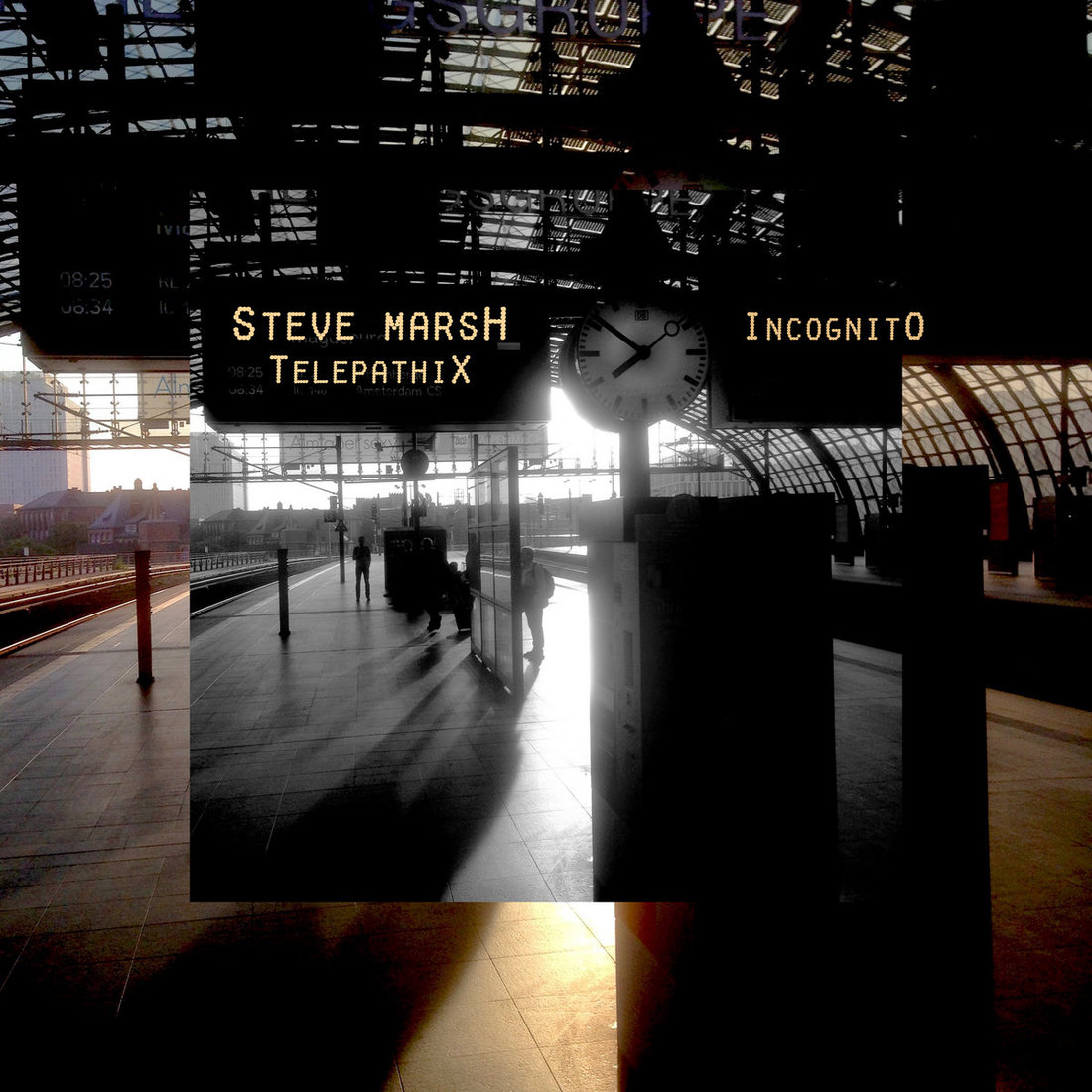 From Tasos Stamou to Zemi17

The Master Musicians of Jajouka led by Bachir Attar - Jajouka Between The Mountains (Real Worlds Records)
Passed down through generations of the same family, the Attars, their trance music is as complex and melodic as it is spiritual and healing. Delivered on instruments including lira (flute), gaita (oboe), guimbri (bass lute) and drums beaten with hands and sticks, it is intensively practised and often played all night.

Wael Alkak - Live (Radio Khiyaban)
Wael Alkak is a Syrian musician based in Paris. He is a composer and electronic music producer who trained in classical knowledge at the Conservatory of Damascus. After studying classical percussion, he joined the Syrian National symphonic Orchestra and various collectives of musicians engaged in everything from jazz, funk, "oriental," and arabic classical music. Based in Paris since 2012, he tours in France and Europe with his band Neshama and his solo electronic music project, Wael Alkak Live.

Wanderwelle - Black Clouds Above The Bows (Imprec)
Black Clouds Above The Bows consists of electro-acoustic threnodies for an environment at risk. Wailing odes express and examine the destructive activity of intensifying storm systems that are enhanced by the climate crisis. First-hand experiences with coastal damage and meetings with local maritime experts on the subject inspired the artists to compose this album.

Zemi17 - Gamelatron Bidadari (The Bunker New York)
The Gamelatron is many things; one could call it a sculpture, a multimodal installation, an instrument, a robot, a feat of engineering, a vision—and it is all these things. More importantly, though, it is a concept sustained by Aaron Taylor Kuffner, aka Zemi17, whose Gamelatrons are "sound producing kinetic sculptures" designed to create an immersive, visceral experience for the listener. Not a small feat, and yet the ambitions of Zemi17 are absolutely realized in this long-standing project, culminating now in his third release for The Bunker NY: Gamelatron Bidadari.