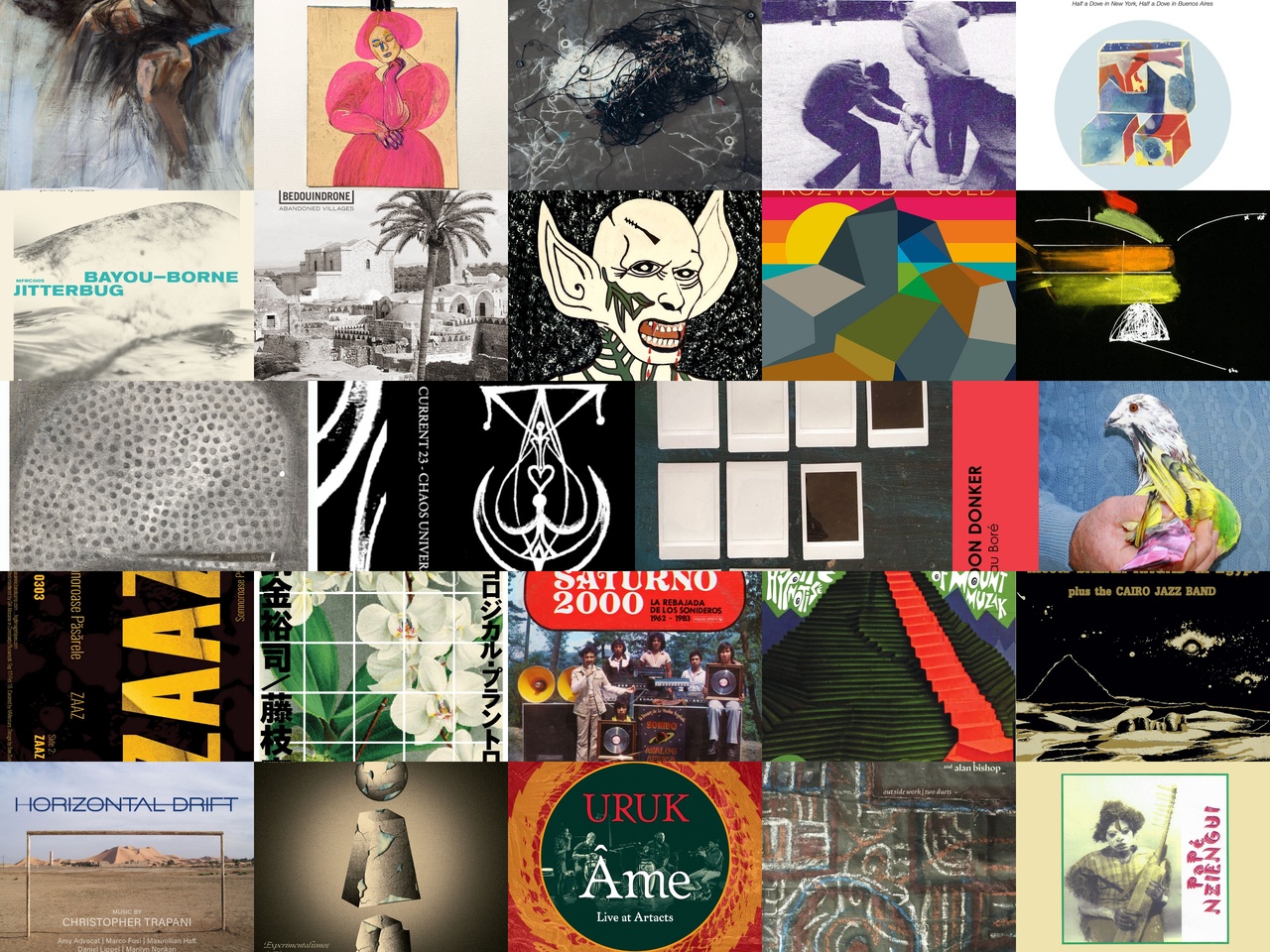 April was a busy month in terms of music releases, so here's a selection of 24 albums and compilation comprising ambient, experimental music, cumbia, free-jazz and improvisation, electronic and post-rock, both new and reissues. 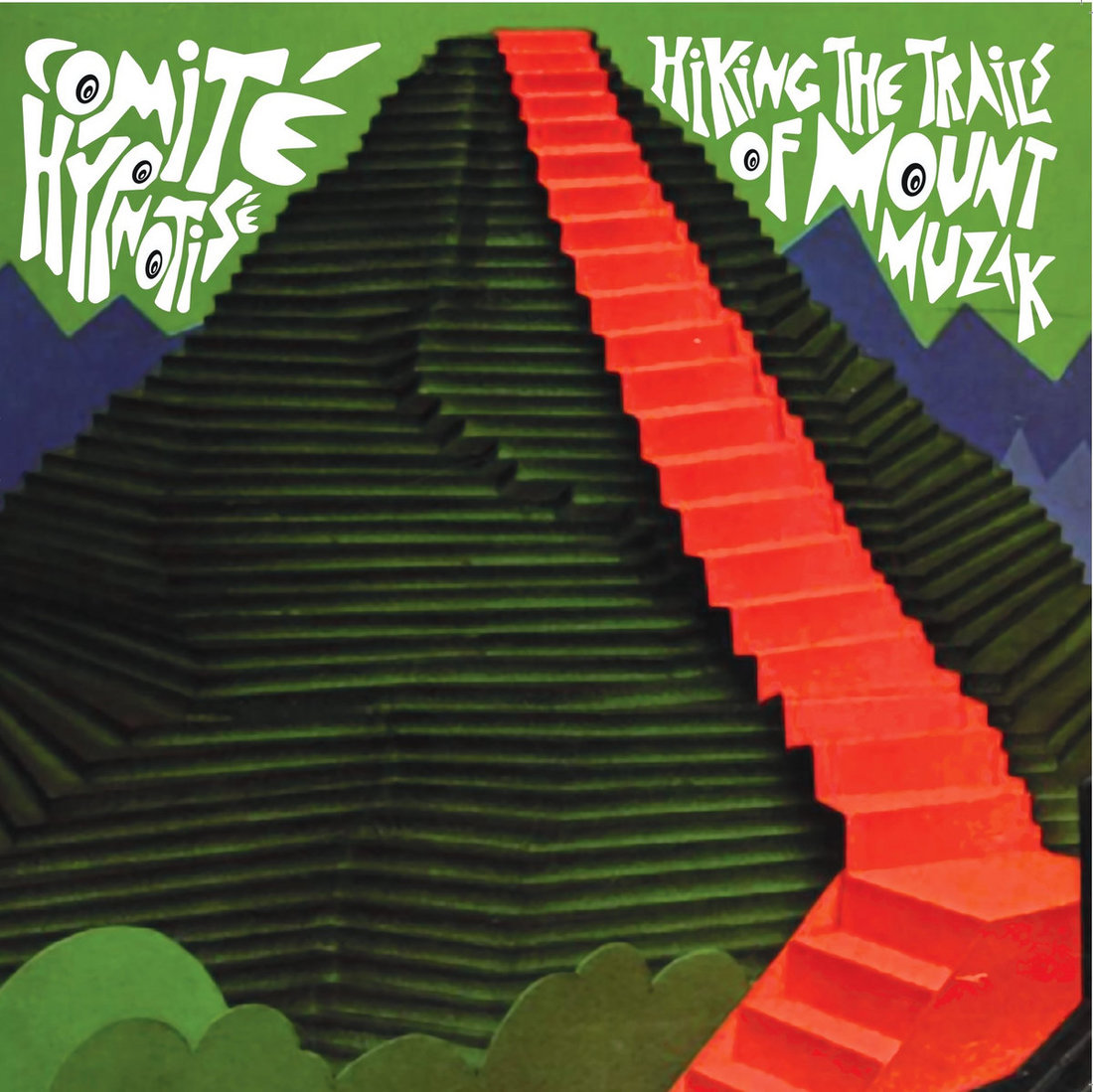 Comité Hypnotisé - Hiking The Trails Of Mount Muzak (Cortizona)
Annea Lockwood & Maze - Bayou-Borne / Jitterbug (Moving Furniture Records)
Annea Lockwood (1939, New Zealand) is known for her explorations of natural acoustic sounds and environments, making works on the intersection of body, environment, sound and text - a life's work that equally highlights acts of generous listening, invitational composition and a hunger for considered experimentation. "Bayou-born, for Pauline (2016) is dedicated to Pauline Oliveros and was composed with her passions in mind." Annea Lockwood.

Asher Gamedze - out side work | two duets with Xristian Espinoza and Alan Bishop (Astral Spirits)
Astral Spirits presents the latest from South African drummer / cultural worker / organizer Asher Gamedze. out side work | two duets is a very literal album featuring Gamedze in a conversation of sorts, a recording made more for the enjoyment of playing together rather than being planned as a release. Quite literally, the record consists of two improvised duets, one with fellow Brothahood member Xristian Espinoza (who's artwork graces the cover and insert of the record as well) and one with Alan Bishop (Sun City Girls, Alvarius B., Sublime Frequencies).

BedouinDrone - Abandoned Villages (Mahorka)
BedouinDrone is a music project drawing inspiration from the conflicting moods of the Middle East, with war, prayer and the pressured condition of Arabic culture being the central themes. Drawing attention to political subjects rarely touched upon by the Western electronic music canon, BedouinDrone utilizes techniques of ambient and noise to immerse listeners in the tense state of the current Islamic world.

Comité Hypnotisé - Hiking The Trails Of Mount Muzak (Cortizona)
Hardly leaving any traces of the dubbed out vibe which marked the first record, Tim expands his Comité Hypnotisé universe to a surprising next level on this second album: exploring a place where Martin Denny, Wu-Tang Clan and Dj Shadow are cooking up a Thai meal in a Peruvian restaurant overlooking the breath-taking peaks of Mount Muzak.

Current 23 - Chaos Universal (Phormix)
Current 23 are George Kanavos, George Diamantopoulos and Fr K141 and this is their new release for the Greek imprint Phormix. During the recordings, various instruments were used and processed electronically together with voices and samples. 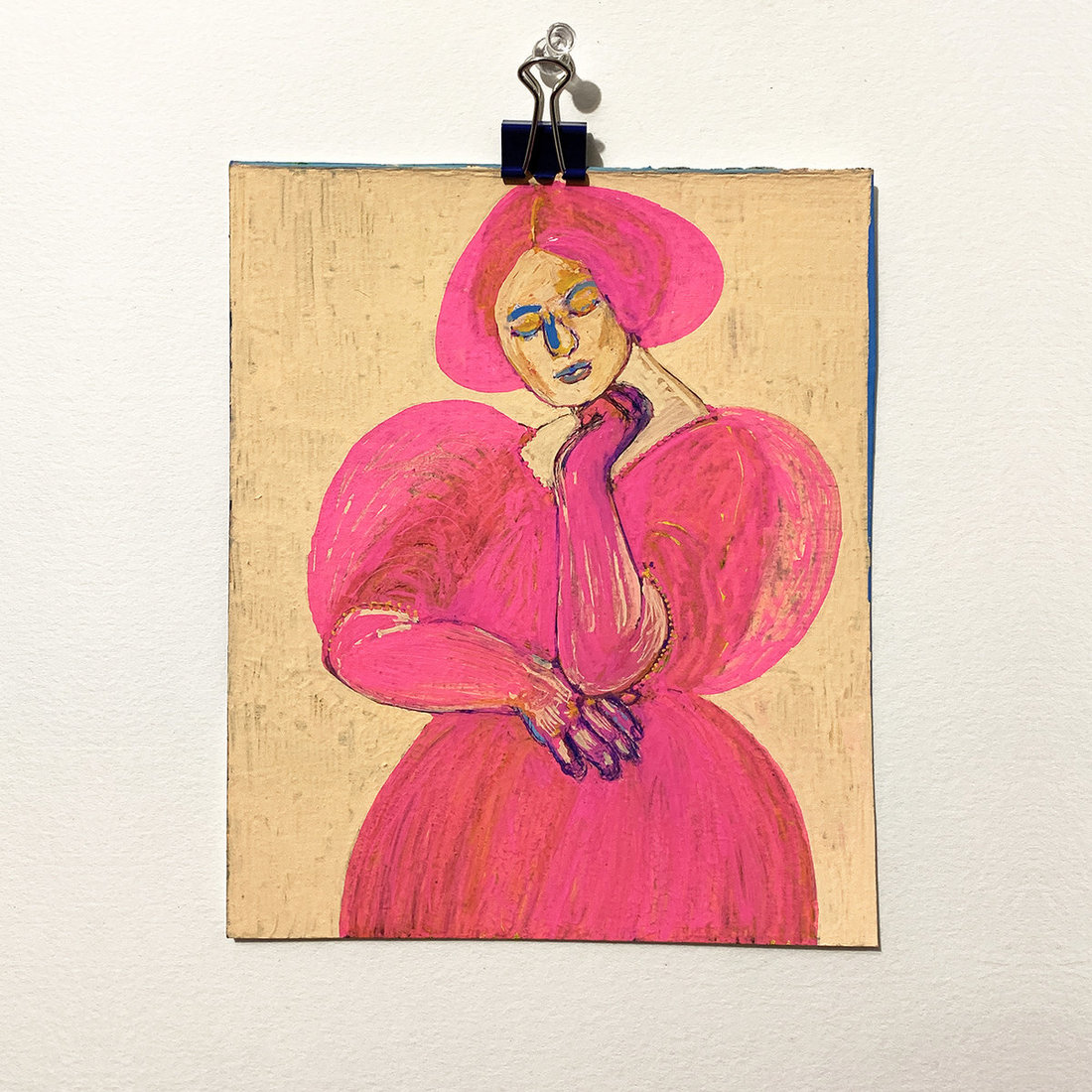 From Julian Sartorius to Ohyung

Julian Sartorius - Mux (Marionette)
Julian Sartorius’ new venture on Marionette is a culmination of all his efforts thus far to mimic a synthesizer and drum machine, experimenting and developing a musical language that bridges the gap between organic timbres and electronic music. This is Julian’s second release on Marionette, after the long out of print Sulla Pelle with Valentina Magaletti in 2019. Other collaborations include prolific artists such as Matthew Herbert, Sylvie Courvoisier, Gyda Valtysdottir, Dimlite, Shahzad Ismaily and Dan Carey (Speedy Wunderground).

Marceau Boré - Schoon Donker (Unjenesaisquoi)
Schoon Donker is Marceau Boré first solo album under his real name. Before known as Piano Chat, a solo pop noise project, the French musician has been commissioned to compose a film score for a documentary film by Katrien Feyaerts, Schoon Donker. The film is about two men and a lot of pigeons. One of the men is a famous and silent pigeon-fancier, the other is the director's father. As the pigeons come and go, both men stay stuck in their lives.

MIZI - Music Behind Music (ТОПОТ)
Music Behind Music is based on the theoretical framework of media archaeology, extending and applying the ideas of the field on experimental music. The main music material is derived through the transmutation, extension, redefinition and cracking of obsolete recording media. Released by the Moscow based imprint ТОПОТ, this is a reflection on the unique properties of the media and the definition of information/noise; an invitation to listen to the music behind the music, a tribute to surface noise.

Ohyung - Imagine naked! (NNA Tapes)
Brooklyn-based, Asian American musician and composer OHYUNG’s music is continuously shifting, investigating, and deconstructing the possibilities of form. Written and recorded mostly over just a 72-hour period, OHYUNG’s first album on NNA Tapes, the immersive and mesmerizing, imagine naked! focuses on expansion and atmospheric depth. It is a collection of loving ambient expressions of persistence, repetition, and variation.

Papé Nziengui - Kadi Yombo (Awesome Tapes From Africa)
Kadi Yombo, published in 1989, is certainly the most successful album in the quest for a fusion between tradition and modernity. Combining beating rattles with a layer of synthesizers, Nziengui blends in a contrapuntal dialogue characteristic of harp playing: male song in appeal and female choir in response, male voice of the musical arc and rhythms of female worship. But above all it’s Tsogho ritual music and modern studio orchestration. The result is an initiatory itinerary of 10 musical pieces which are all milestones likely to be simultaneously listened to, danced, meditated on, and soon acclaimed.

Pauline Oliveros & Reynols - Half a Dove in New York, Half a Dove in Buenos Aires (Smalltown Supersound)
"Through Pauline Oliveros Foundation I am interested in helping in the evolution of the INTERNET as an international venue where diverse collaborators can engage with one another. I met Reynols as a group in Buenos Aires a few years ago when I was leading a Deep Listening Workshop. I was impressed with this group when they played a serenade for me on my departure. All were playing brass instruments that they had never played before. It was clear that they understood and negotiated the element of risk in the kind of improvisation that I value. Reynols also has communicated with me since the workshop in many ways. I love the feedback and connection." Pauline Oliveros, August 1999

Rozwód (Divorce) - Gold (Fonoradar)
After the well-received debut album Pompy, Rozwód (Divorce) is back as an electro-acoustic trio with a new record called Gold, a result of their sonic journey in the search of noble metals and corrugated sheets. Gold is a complex movable sound structure fueled by impenetrable raw materials from outer space. This we know for sure. Dig in deeper to find out more for yourself. Sit back and enjoy!

V.A. - Saturno 2000 - La Rebajada de Los Sonideros 1962-1983 (Analog Africa)
The sonidero who brought Peruvian and Ecuadorian music to Mexico was the legendary Pablo Perea from Sonido Arco-Iris, and although his fingerprints are all over the compilation Saturno 2000, this selection of songs in rebajada is exclusive to DJ Lengua. With the exception of a few classics from Polibio Mayorga and La Sampuesana – the queen of all rebajadas – most of these songs were probably never performed as such before, let alone released. 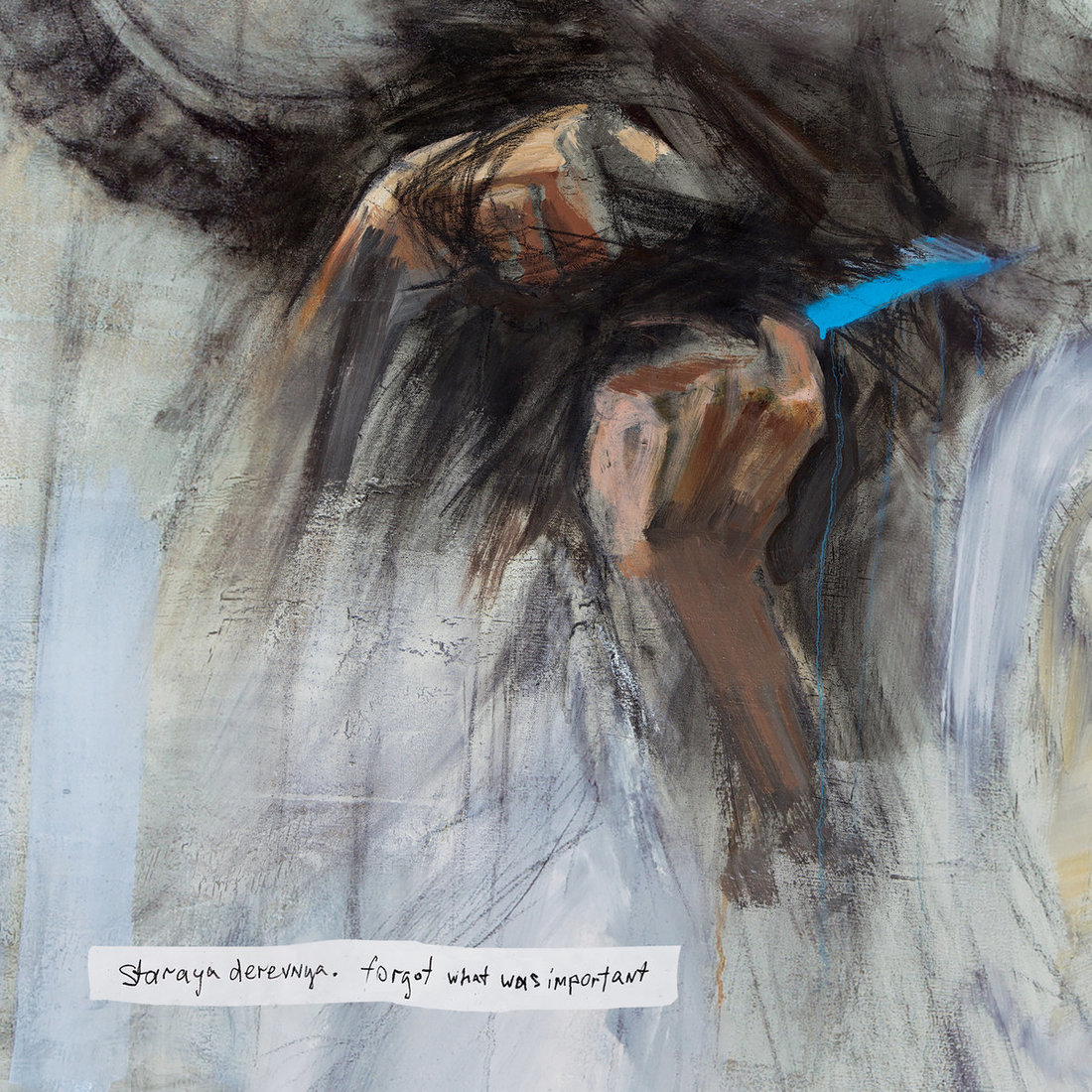 From Sun Ra to Uruk

Staraya Derevnya - Forgot what was important (Ramble Records)
British-Israeli krautfolk collective Staraya Derevnya present their new album out on Ramble Records, comprising six pieces of music made between 2010-2020 and including a wide array of collaborators and players.

Sun Ra Arkestra & Salah Ragab - Sun Ra Arkestra Meets Salah Ragab In Egypt (Strut Records)
Strut present the final instalment in their series of reissues of Sun Ra’s historic recordings in Egypt with The Sun Ra Arkestra meets Salah Ragab in Egypt plus the Cairo Jazz Band, originally released on Greek label Praxis in 1983. Salah Ragab first encountered the Arkestra at a concert at the house of Goethe Institut expat Hartmut Geerken during the Arkestra’s first visit to Cairo and Heliopolis in December 1971 and, although Ra and Ragab did not meet in person on that occasion, they did meet and bond together when Ra returned to Egypt in 1983, resulting in these recordings.

V.A. - Territorio del eco: Experimentalismos y visiones de lo ancestral en el Perú (1975-1989) {Essential Sounds collection} (Buh Records)
First compilation brings together the Peruvian experimental scene from 1975 to 1989, a period was the most prolific for a generation of Peruvian artists who, based on musical conceptions derived from modern jazz and techniques inherited from avant-garde music, sought to integrate the sounds of Andean, Afro-Peruvian and Amazonian cultures in search of a new musical universe. Native instruments and folk melodies were used in compositions that demanded modern recording techniques and electronic sounds. This generation was articulated in Lima and was made up of musicians such as Omar Aramayo, Manongo Mujica, Arturo Ruiz del Pozo, Miguel Flores (Ave Acústica), Douglas Tarnawiecki (Espíritus), Luis David Aguilar, Chocolate Algendones and Corina Bartra.

Yuji Dogane & Mamoru Fujieda - Ecological Plantron (EM Records)
Ecological Plantron was a CD released in 1994, the audio document of an installation held in 1994 at a gallery in Tokyo. The Plantron is a bioelectric interface developed by botanist Yuji Dogane; it was designed to give voice to plants, using electronic means to make audible the energy of the natural world, prioritizing the non-human aspects of nature. Dogane was assisted in the project by composer Mamoru Fujieda, who helped to convert the vegetal energies into audible sounds.