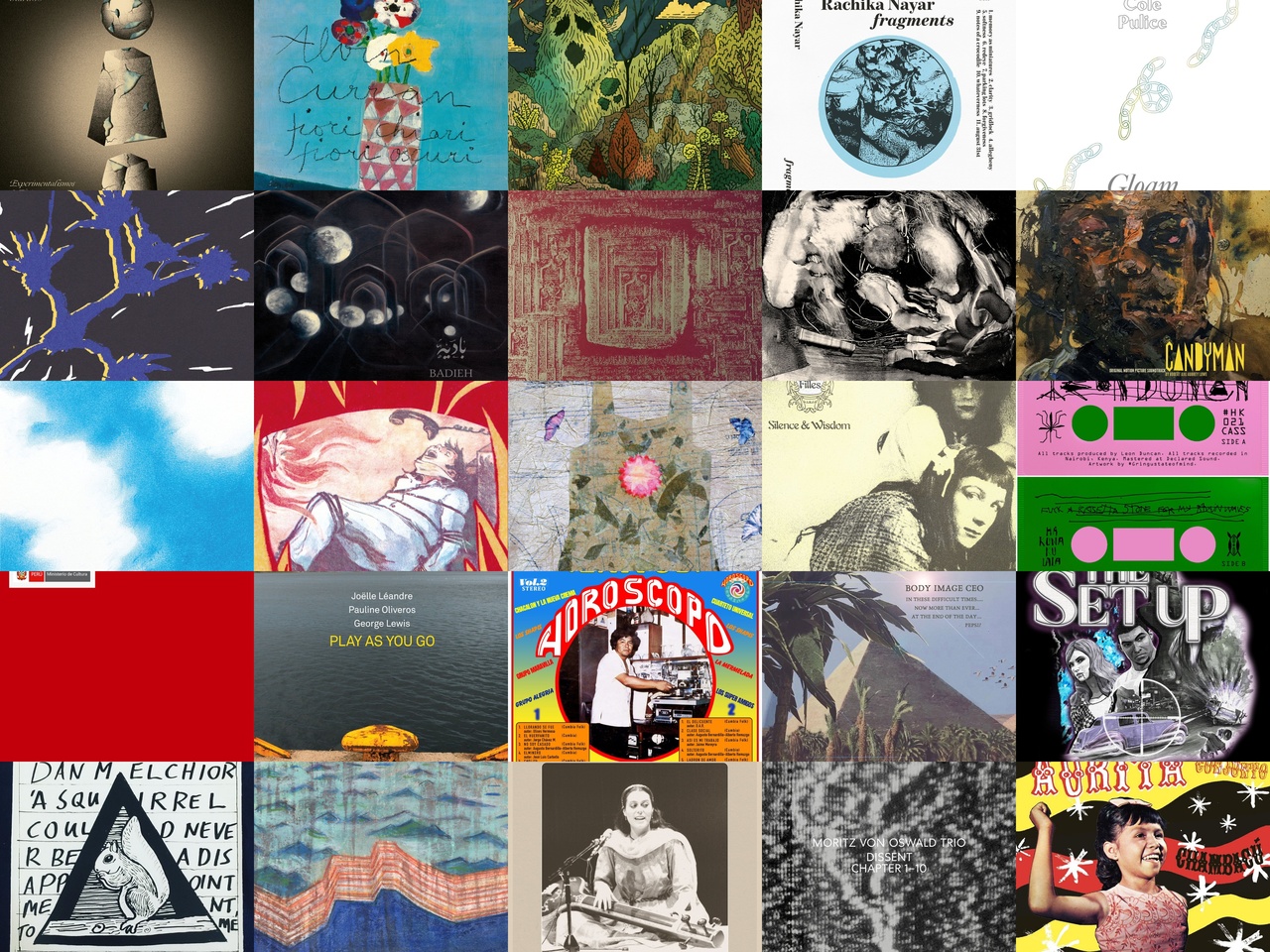 This month we present a selection of 26 albums released over the course of August 2021, comprising a wide variety of music, from Peruvian experimental music to contemporary oddities, chicha, cumbia and lots of free-improv, both new and reissues.

From Amelia Cuni to Badieh

Amelia Cuni - Parampara festival 13.3.1992 (Black Truffle)
Black Truffle presents Parampara Festival 13.3.1992, a stunning performance by Amelia Cuni captured live in Berlin almost thirty years ago. Milanese by birth and resident in Berlin for many years, Cuni lived in India for over a decade, studying the classical vocal style of dhrupad under masters of the form. Though perhaps known to many listeners primarily through her performances of the vocal music of John Cage and collaborations with Werner Durand and Terry Riley, she is recognised internationally as one of the great contemporary proponents of traditional dhrupad singing. These recordings document her performance at the 1992 Parampara Festival at the Haus der Kulturen der Welt, a landmark event celebrating the global spread of Indian classical music, bringing together Indian teachers with their international students.

Aurita Y Su Conjunto - Chambacu (Mississippi Records)
Mississippi Records releases this LP compilation of the great Aurita Castillo, the young queen of Cumbia from the legendary Chambacu neighborhood. Little is known about Aurita other than her cutting some killer records for Discos Fuentes in Medellin in the 1960s. Her recordings with an uncredited backing back are some of the heaviest and most perfect cumbias of the era - ripping electric and acoustic guitars, snapping thundering drums, dark clarinet melodies and Aurita’s amazing voice commanding the show.

Badieh - Badieh (Worlds Within Worlds)
A collaboration between two masters of their craft, Badieh is the project of Michel Gasco and Mohammad Miraghazadeh. A step past Gasco’s previous Orontes project, these delicate reinterpretations of traditional Khorasani folk track takes his instrumentation to new heights. Each strum is crafted to perfection, perfectly complemented by Miraghazdeh’s expertise in Persian classical music. Those with a keen ear may hear similarities between Badieh’s music and the sounds of Mohammad Rahim Khushnawaz, Sima Bina and Ensemble Kaboul. 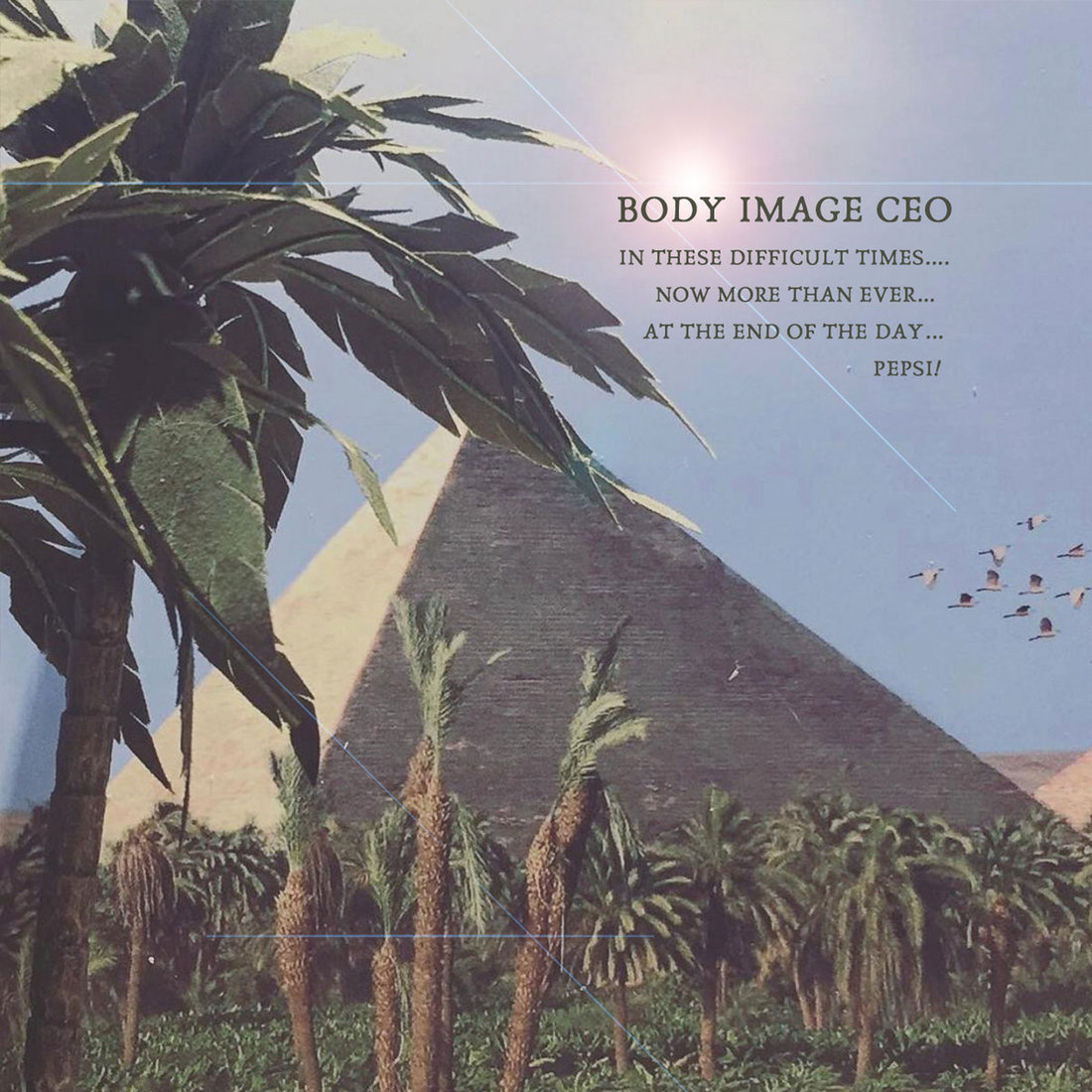 From Calamita to Deux Filles 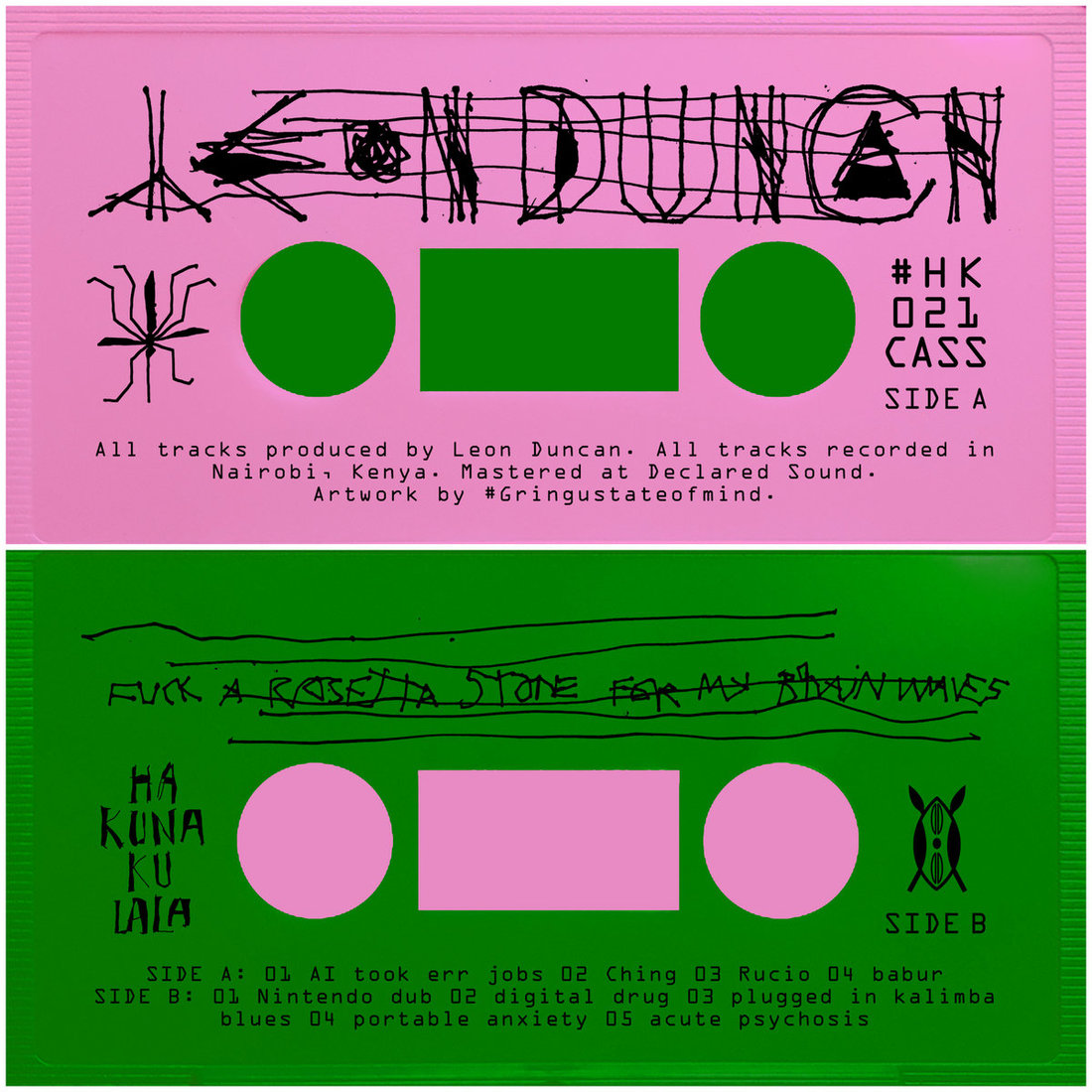 Francesco Cavaliere & Tomoko Sauvage - Viridescens (Marionette)
For their first release on Marionette, Francesco Cavaliere and Tomoko Sauvage embody a tactile audio visual display, radiating the color green into sounds and painting meditative music. By transforming collected objects into invented instruments and scenography, each motif becomes a dedication to a specific situation, an anecdote or a symbol, sometimes real and other times absurd, that the artists have encountered through their travels and conversations: the Chinese myth about a man wearing a green hat, naming convention of Japanese traffic lights, or even the imaginary chants of frolicking twin dolphins. This inspired the duo’s personal research on experimenting with raw and synthesized idiophones, stage landscape design, spontaneous field recording and organized improvisation.

Jake Blanchard - Bryophytes (Was Ist Das?)
Jake Blanchard is a freelance illustrator and musician living and working in Todmorden, West Yorkshire. His work is often inspired by the natural world as well as mythology and ancient cultures. Much of his work embraces the aesthetics of psychedelia. As well as working as an Illustrator Jake also runs record label and zine publishers, Tor Press.

Katharina Ernst - Le temps - a solo for drums and metal objects in five states (Ventil Records)
In her recent work Le Temps, Austrian artist and drummer Katharina Ernst lays the focus on the playful possibilities of an acoustic setting and show that a drum kit is a subtle and versatile instrument. Without any amplification and through the direct effects of specific sounds, intimacy and closeness are to be created and the listener is directly touched by the clear tones. Classical styles of playing the drum set are complemented using mallets and instruments from traditional Korean music, the samul-nori, as well as by everyday used objects such as bicycle bells or bathtub plugs, thus creating a detailed and hybrid sound image of an extended drum kit.

Leon Duncan - Fuck A Rosetta Stone for My Brain Waves (Hakuna Kulala)
Growing up in Nairobi, Leon Duncan learned to produce music by experimenting with recording software in his high school’s computer lab. Before long he was selling beats, but his restless, anxious mind quickly drew him closer towards extreme music. Duncan had never played guitar, but answered a call for guitarists from local heavy metal band Lust of a Dying Breed. Together with vocalist Martin Kanja (now half of Nyege Nyege’s Duma), he developed an idiosyncratic form of Kenyan industrial music, patching a synth that sounded as serrated as distorted guitar and getting kicked out from his apartment in the process. When a track made its way to Nyege Nyege Tapes, Duncan was extended the creative freedom to develop his sonic experiments.

Moritz Von Oswald Trio - Dissent (Modern Recordings)
Moritz von Oswald Trio returns with Dissent, a striking new album that explores the scope of jazz and dance music within abstracted electronic music. It follows the Sounding Lines LP from 2015 with a further explorative and daring sound, which dives through broad ambiences, uptempo dance and jazz sensibilities. As ever with albums from the Moritz von Oswald Trio, this new album, recorded during November and December 2020 in Berlin, emerged from a series of long extended jams that were then edited down. 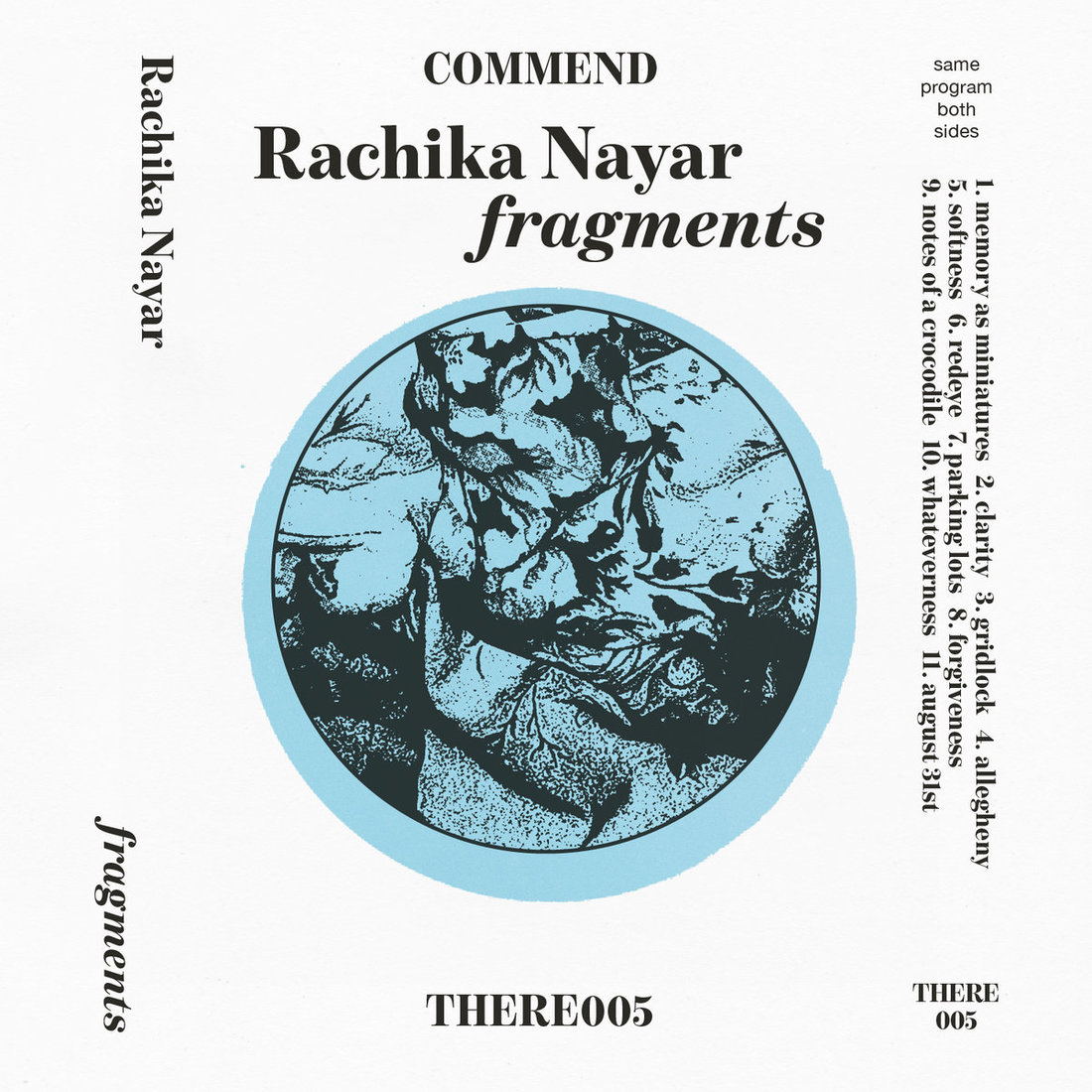 From Porest to Saint Abdullah

Nina Guo & Augustė Vickunaitė - A thing is a thing but you can't really understand how far away it is from you (Das Andere Selbst)
Nina Guo and Augustė Vickunaitė improvise together. Nina’s free monologues fragmentation isolates images and thoughts that shift daily life formulas into mischievous language epiphanies and fizzy onomatopoeias. Augustė’s here and now tape-loops and glitches push this metamorphosis further, recasting the narration in a playfully dangerous soundscape. The mastery of their medium allows both to easily lose and regain control of the happenings, shape and entropy are testing each other limits.

Rachika Nayar - Fragments (RVNG Intl.)
The latest installment of THERE, Commend’s ongoing series of music recorded beyond but inspired by the communal efforts of RVNG Intl.’s Lower East Side space, arrives courtesy of New York sound artist Rachika Nayar. Fragments is a work of sonic miniatures Nayar constructed from guitar loops and in the familiar comforts of her own bedroom.

Robert Aiki Aubrey Lowe - Candyman (Waxwork Records)
Robert Aiki Aubrey Lowe (is an artist, curator and composer who works primarily with, but not limited to, voice and modular synthesizer for sound in the realm of spontaneous music. Along with analog video synthesis works, he has brought forth an A/V proposal that has been a focus of live performance and installation / exhibition. The marriage of synthesis and the voice has allowed for a heightened physicality in the way of ecstatic music, both in a live setting and recorded. The sensitivity of analogue modular synthesis echoes the organic nature of vocal expression, which in this case is meant to put forth a trancelike state. Lowe’s works on paper tend towards human relations to the natural/magical world and the repetition of motifs.

Saint Abdullah - To Live A La West (Imprec)
To Live A La West is a new work from Saint Abdullah, comprising a collection of profound and spiritual tracks miraculously existing at the impossible intersection of free jazz and electro where mystery and clarity exist together. Neither complicated nor complex but profound, St. Abdullah’s recent album is partially inspired by their love for Jon Hassell’s compositions. 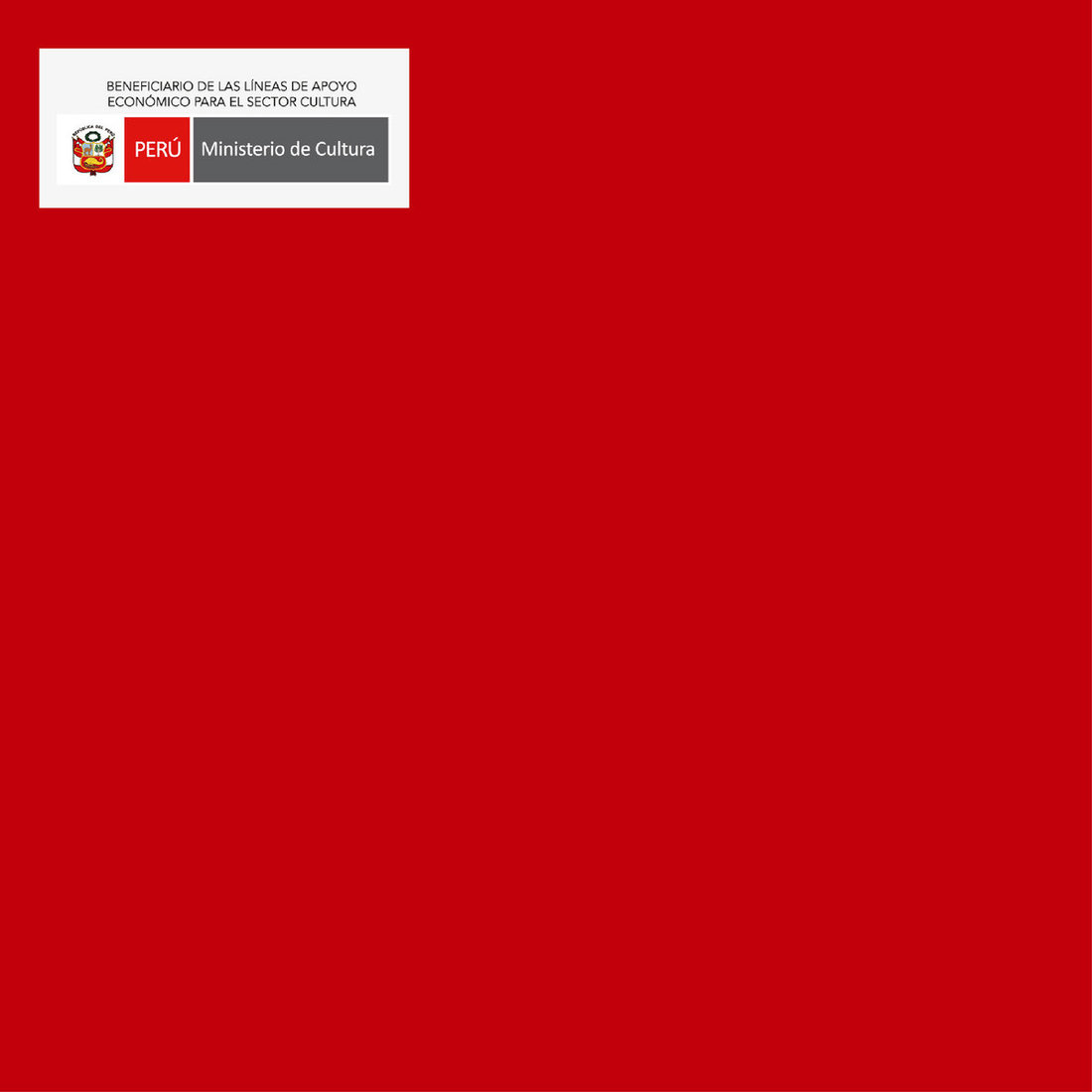 From Tender Buttons to Van Stiefel

V.A. - Territorio del eco: Experimentalismos y visiones de lo ancestral en el Perú (1975-1989) {Essential Sounds collection} (Buh Records)
Buh Records presents this new compilation comprising works from the Peruvian experimental scene from 1975 to 1989, a period was the most prolific for a generation of Peruvian artists who, based on musical conceptions derived from modern jazz and techniques inherited from avant-garde music, sought to integrate the sounds of Andean, Afro-Peruvian and Amazonian cultures in search of a new musical universe. Native instruments and folk melodies were used in compositions that demanded modern recording techniques and electronic sounds. This generation was articulated in Lima and was made up of musicians such as Omar Aramayo, Manongo Mujica, Arturo Ruiz del Pozo, Miguel Flores (Ave Acústica), Douglas Tarnawiecki (Espíritus), Luis David Aguilar, Chocolate Algendones and Corina Bartra.

Van Stiefel - Spirits (New Focus Recordings)
Composer and guitarist Van Stiefel's Spirits is his unique take on the studio-instrumental albums of layered guitar by legends like Les Paul, Chet Atkins, and Glen Campbell, filtered through his own introspective and personally spiritual approach to the instrument. Those albums were often a series of vignettes, each tune suggesting a particular location, mood, or flavor. This album turns that form into something akin to journal entries that hint at secrets, idiosyncrasies, and personal rituals.

Wilder Gonzales Agreda - Rojo (Superspace Records)
Rojo is Wil Volador's second album for this year. After merging with the sounds extracted from the tools enabled by government support, we see the non-musician now immerse himself in a 39-minute journey through ambient, IDM and visionary sounds armed with software and diverse synths.