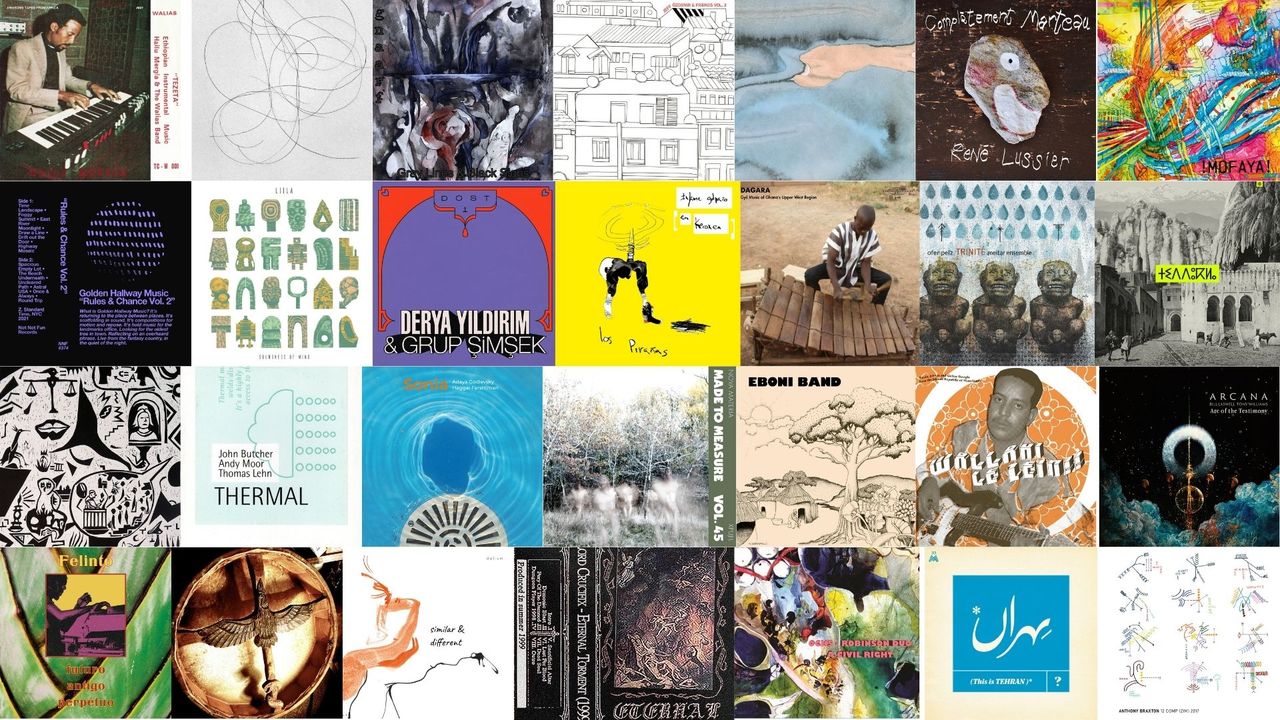 The summer mood is fully activated, so in case you need an honest companion for your holiday travels, here's the monthly Staff Picks column. This month we present a selection of 29 albums released over the course of June 2021, and comprising anything from Korean experimental to Anatolian finesse, shamanic and spiritual endeavours, early Memphis rap influences, meditative ambient music, contemporary, free jazz and a sea full of improvisation; both new and reissues.

Meanwhile, listen back to our first episode of the Staff Picks radio show, broadcasted live on Black Rhino Radio.

From Anthony Braxton to Arcana 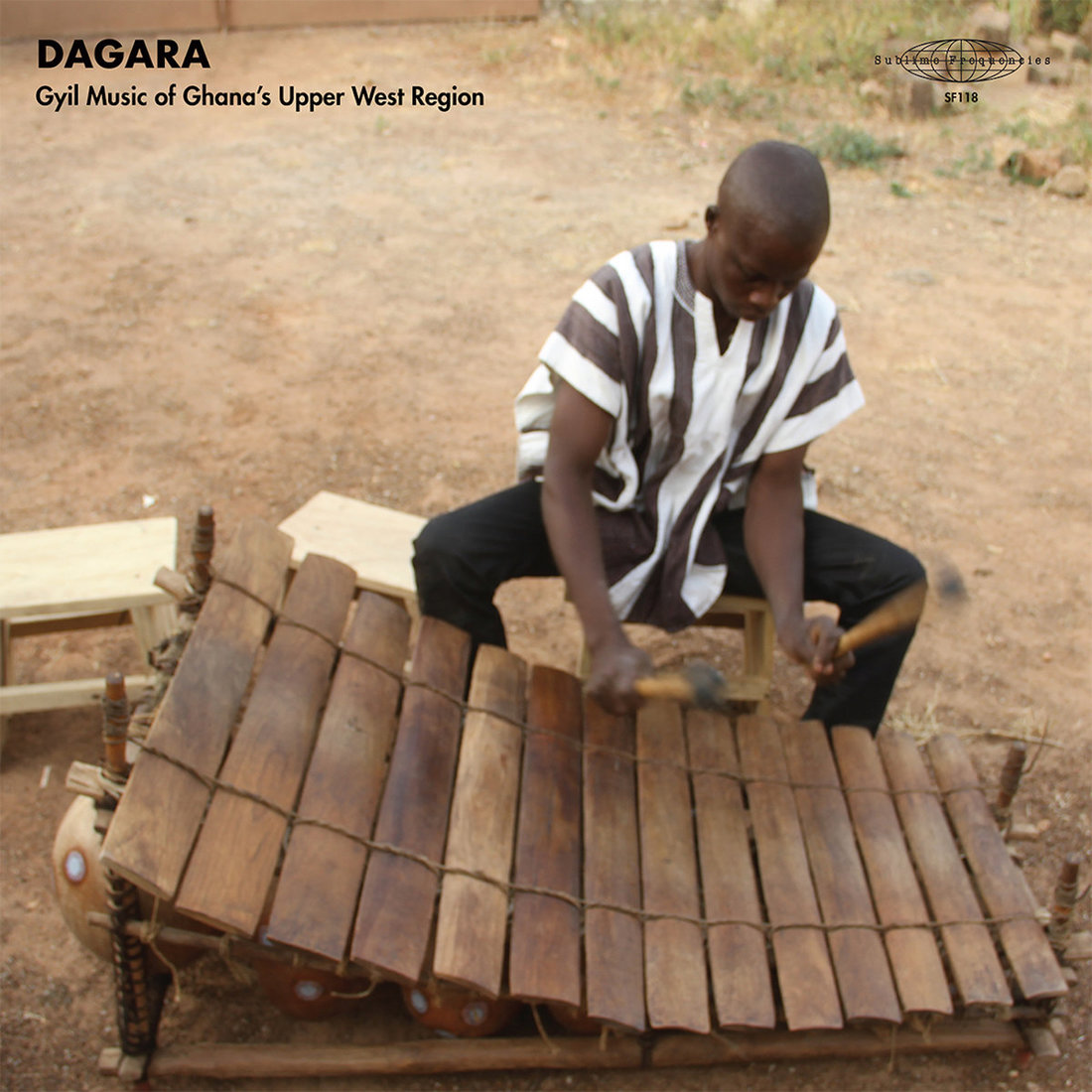 Anthony Braxton - 12 Comp (ZIM) 2017 (Firehouse 12 Records)
This is the latest iteration of Anthony Braxton's musical system, called ZIM Music, which is derived from language number 11: gradient logics. Gradient logics pertain to aspects of music that continually change, faster and faster, slower and slower, brighter and brighter, darker and darker. 12 Comp (ZIM) 2017 documents 12 performances over the course of two years, showcasing the development of ZIM music as the compositions and ensemble adapted to new musical situations.

Arrington de Dionyso - Trust the Drum (self-released)
This album presents Arrington de Dionyso’s take on the idea of "Shamanic Drumming" as a well-intentioned listening experience. "This music is going to be more energizing than relaxing. There are hypnotic qualities that will allow you to go as deep into a trance state as you are willing to go while listening. I recommend listening through good speakers if possible rather than headphones, the reason being is that headphones have a way of "hacking" your neurological response to sound waves by only running those waves through your ear drum. Try to listen with the whole body, particularly paying attention to how the low frequencies affect your breathing, digestion, heart rate and circulation," Arrington de Dionyso writes. 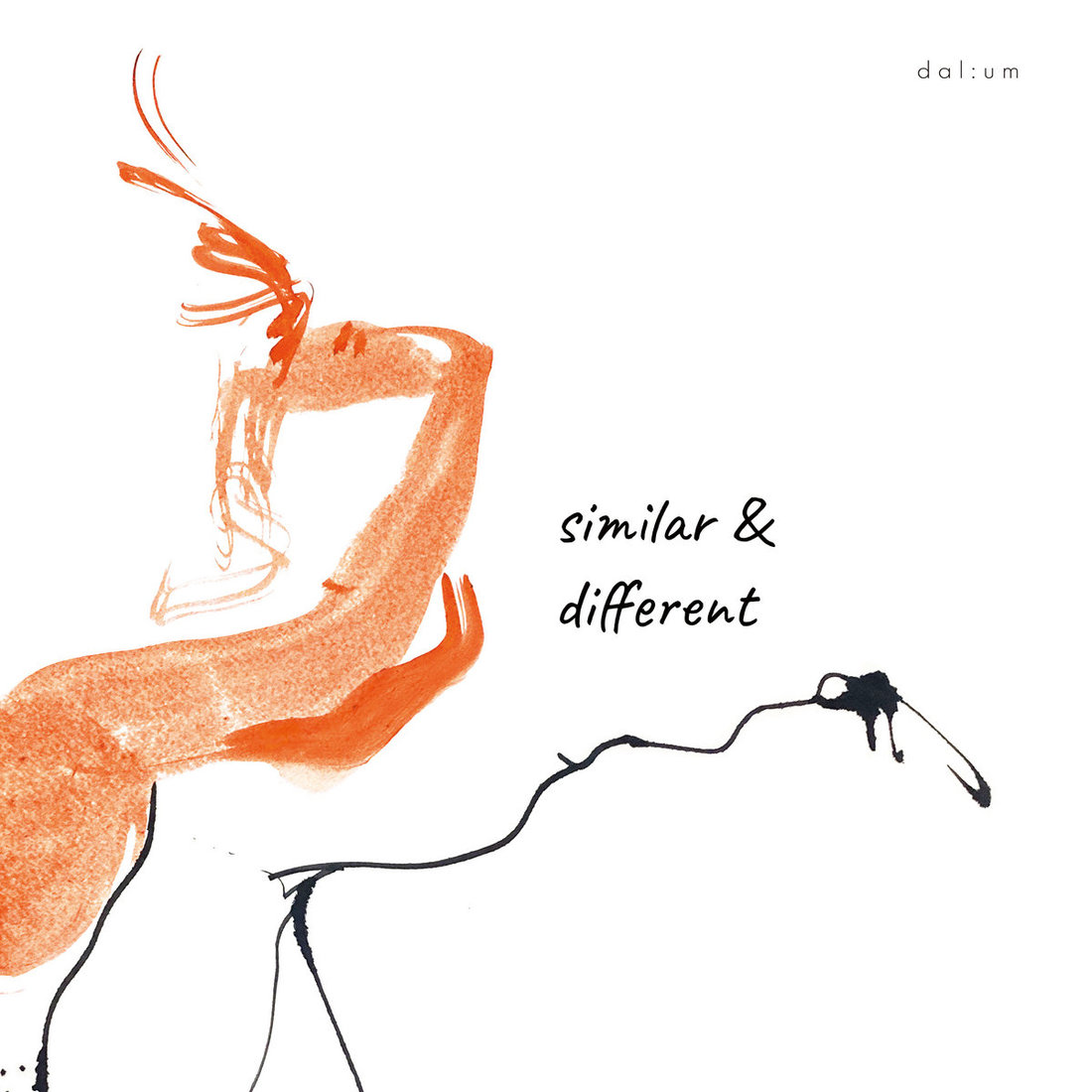 Dal:um - Similar & different (Glitterbeat Records)
Dal:um is a musical duo based in Seoul, comprising Ha Suyean (gayageum) and Hwang Hyeyoung (geomungo), who challenges the sonic possibilities of Korea’s most well-known traditional string instruments: the gayageum and geomungo. Ethereal and otherworldly, Dal:um create a compelling soundworld that treasures subtle dynamics and the space between the notes.

Derya Yıldırım & Grup Şimşek - Dost 1 (Les Disques Bongo Joe)
Anatolian psych-pop sensations Derya Yıldırım & Grup Şimşek return with their second album Dost 1 (‘friend’), the first of a two part series, to be released in 2021. Fronted by Berlin based, Turkish singer and multi-instrumentalist Derya Yıldırım and with members in France and Great Britain, the group is known for its contemporary takes on traditional Anatolian folk ballads whilst drawing on a heady mix of psychedelia, jazz and the omnivorous pop universe of the present day. Derya Yıldırım and her trans-continental band of brothers and sisters are an essential guide for contemporary psychedelia. Highly recommended and addictive.

Eboni Band - S/T (We Are Busy Bodies)
41 years since its original release, Eboni Band's self-titled album receives its first ever re-release by Canadian label We Are Busy Bodies. Reinventing itself as a record for the ages, a tour-de-force of cross continental soul and funk, it features session musicians from Motown and Ivory Coast's Eboni Records alongside Fred Wesley (James Brown/Parlimanent). It was produced by Art Stewart (producer of Marvin Gaye's Got To Give It Up and Rick James’ breakthrough album, Come Get It!), and arranged by Greg Middleton.

Ekoplekz - The Revenant Tapes (Sterile Records)
Nick Edwards aka Ekoplekz recorded these songs between 2013 and 2019 on cassette four track in Bristol. Here’s a great package of 15 pieces comprising anything from electropunk to hauntological sounds fused with noise and industrial influences. 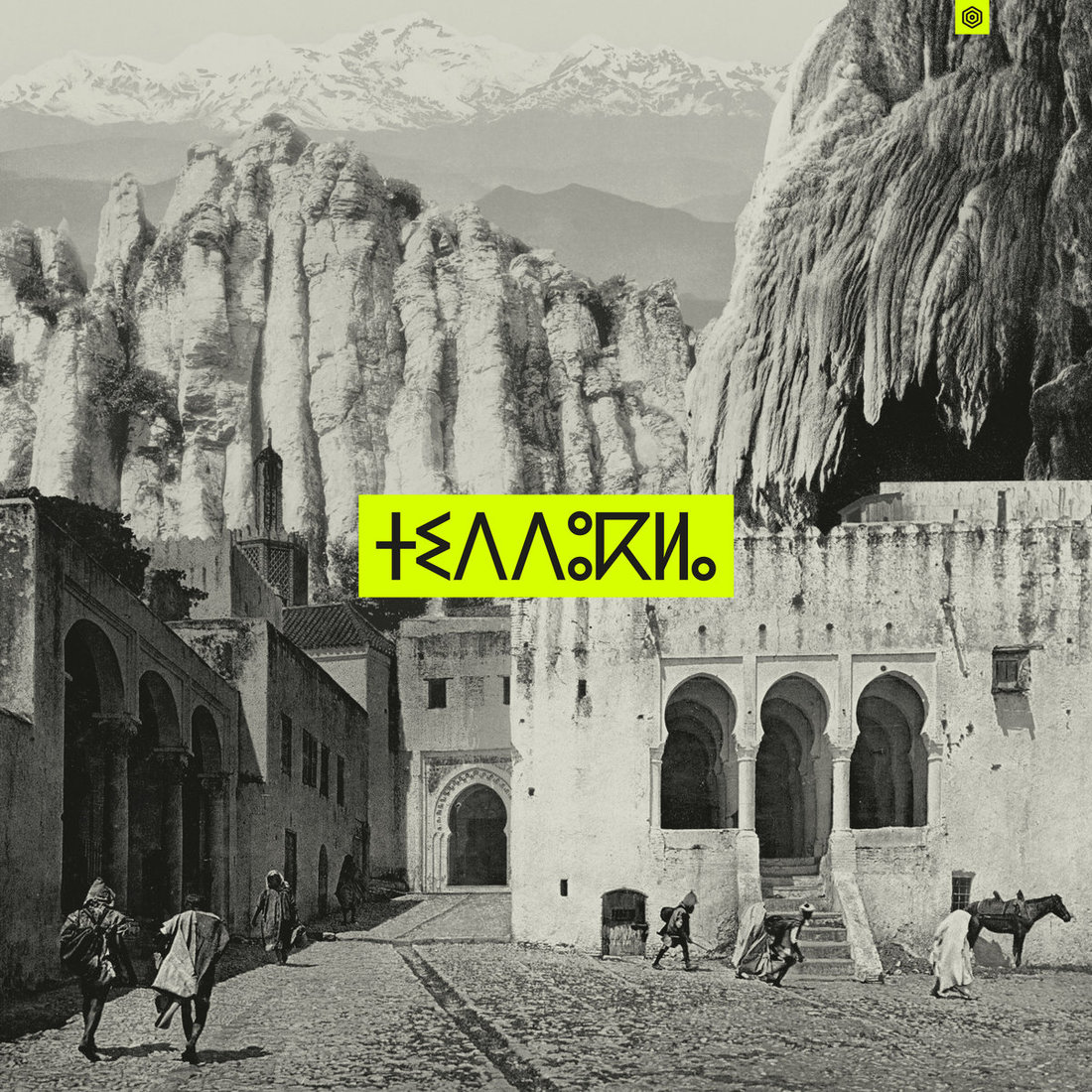 From Hailu Mergia to Jeff Özdemir

Golden Hallway Music - Rules & Chance Vol. 2 (Not Not Fun Records)
The latest work of the urban kosmische keyboardist Zack Tornaben aka Golden Hallway Music is a full eclectic hour of voyaging inner-harmony themes and meditations, recorded across the pandemic winter in his Manhattan apartment. Utilizing his signature rig of a 1968 electric combo organ and primitive drumbox run through a two-machine tape delay, the songs spiral, slipstream, and shimmer, equal parts open road and cosmic ascension.

Hailu Mergia - Tezeta (Awesome Tapes From Africa)
This "Tezeta" album is one of those that have been impossible to find for nearly three decades. Sourced by Awesome Tapes From Africa and expertly remastered by Jessica Thompson, its unique and funky renditions of standards and popular songs of the day are so quintessentially Walias, flavorful and evocative. Hailu Mergia's melodic organ, unashamedly front and center in every track, makes even the complex pieces accessible.

Hassan Wargui - Tiddukla (Hive Mind Records)
Hassan Wargui is a self-taught musician, composer, songwriter, multi-instrumentalist, and an expert in the songcraft and poetry of the Tachelhit speaking Amazigh tribes of the Anti-Atlas Mountains in the south of Morocco. Tiddukla (which translates to Friendship) is one of Hassan's numerous group projects and he recorded the album with friends in 2015 and self-released it through YouTube due to the lack of music infrastructure in Morocco. Don't miss this one.

Hyunhye Seo - Strands (Room40)
Hyunhye Seo’s present album released by the ever-prolific label Room40 divides the idea of Strands into two parts, evoking a minimalist and atmospheric chant dedicated to the hair. "I’m exposed by the hair that falls from me in long, dark and grotesque trails. It’s impossible to pretend I wasn’t where I’ve been."

Larry Ochs & Donald Robinson - A Civil Right (ESP-Disk’)
Although Ochs and Robinson have collaborated in various groups for more than 20 years – including in the trio What We Live with bassist Lisle Ellis – their duo is a recent phenomenon, having developed over the past couple of years. Ochs says, "Our playing together has evolved to a really special place, I think. We’re definitely coming out of the tradition of horn-drum duos from John Coltrane & Rashied Ali to Wadada Leo Smith & Billy Higgins, but we’ve found our own space after a long stretch of shows together. Our set will include new, original material, with some high-energy playing and things that are more spatial, as well as some homages to more popular music. In a sparse setting like this, the music hits a listener right away – nothing is obscured, everything is clear."

From Matthias Puech to Mofaya!

Liila - Soundness Of Mind (Not Not Fun Records)
Portland duo Danielle Davis and Steven Whiteley aka Liila formed during a shared tenure at a Zen Buddhist monastery, bonding over mutual fascinations with deep listening and intersections of sonic futurism and archaism. Soundness Of Mind is their debut album and was conceived on synthesizers, samplers, and laptops in “forgotten corners of the monastic grounds” as well with an array of acoustic instruments at their eclectic home studio, both before and during pandemic lockdown.

Los Pirañas - Infame Golpazo en Keroxen (Discrepant / Keroxen)
The Colombian trio return with an echo blast after their last delivery Historian Natural (2019, Glitterbeat) to make their own way through the psychedelic tunnel visions of cumbia, champeta, psych surf rock and everything else in between. Part of a new collaboration between Discrepant and Keroxen labels, firing up the less obvious island-made music into the wide world.

Matthias Puech - A Geography of Absence (Nahal Recordings)
After the exploration of snowy mountains of Alpestres, released on Hands in the Dark in 2018, French composer Matthias Puech ventures into new territories, sketching a cartography of the invisible where the journey, in chiaroscuro, is announced as a rite of passage. A Geography of Absence, as introspective as unpredictable, immerses the listener into a unique sensory whirlwind where organic matter becomes almost palpable.

Mofaya! - Like One Long Dream (Trost Records)
This fearless free jazz quartet titled Mofaya comprises Jaimie Branch on trumpet, John Dikeman on tenor saxophone, Luke Stewart on bass and Aleksandar Skoric on drums. Their latest effort has been published by the Austrian imprint Trost and comprises three long improvisational pieces recorded through the end of 2019. This is not an easy one.

Nova Materia - Xpujil (Crammed Discs)
Xpujil (pronounced “ex-poo-khil”) is a single, 40-minute immersive piece which takes the listener on a sonic journey through an organic and shifting world. An album which blurs the limits between music, field recording and psychoacoustic trance. 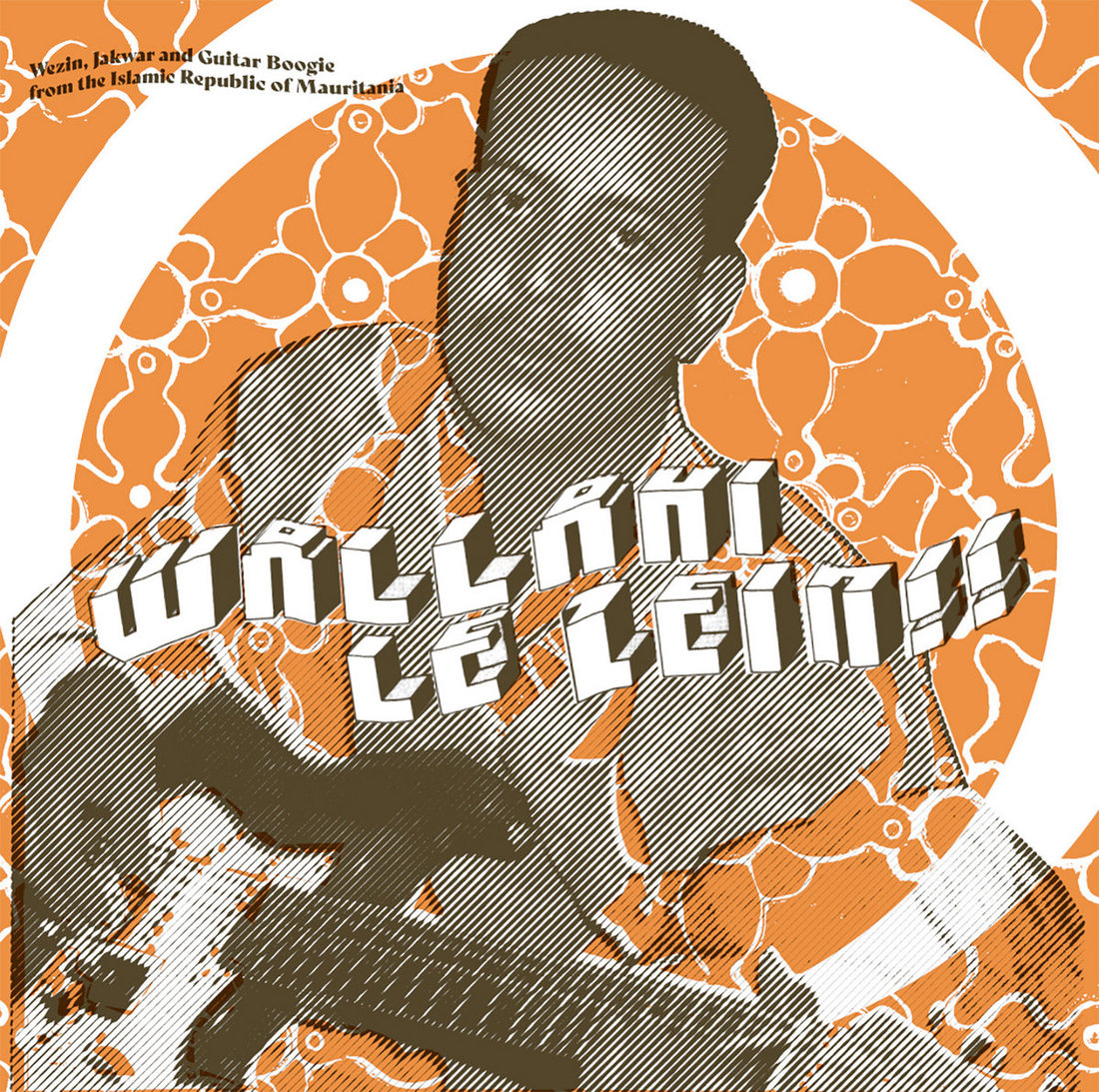 Ofer Pelz & Meitar Ensemble - Trinité (New Focus Recordings)
Composer Ofer Pelz celebrates an eight-year collaboration with Israeli based Meitar Ensemble with Trinité, a collection of five works that highlight Pelz' intricate hybrid ensemble textures and deft command over applying repetition with variation to looped material. With a special emphasis on the illuminating possibilities afforded by prepared piano writing in solo and chamber settings, Pelz' music is both experimental and grounded in unfolding narrative.

René Lussier - Complètement marteau (Circum-Disc)
"I gathered four compositions from commissions to which I responded with a maximum of freedom. They all testify to a long process of gossiping and pecking. As a proud patentee of out-of-the-box music, I have grouped them together under the title Complètement marteau, as in crazy stiff, unbridled and surprising, but also as in handcrafted, patiently and laboriously, with my self-taught tools." René Lussier

Various Artists - This Is Tehran? (30M Records)
This Is Tehran? is a 10-piece album compilation merging diverse contemporary Iranian composers and musicians. From contemporary classical sounds with Saba Alizadeh on the Iranian spiked fiddle Kamanche or Siavash Molaeian together with Kasra Faridi on the piano to the well-known experimental electronic musician Ata "Sote" Ebtekar.

Various Artists - Wallahi Le Zein! (Mississippi Records)
Drawing from the deep well of Mauritanian classical music, the gamut of musical modes and the tidinitt lute repertoire are transposed to the electric guitar - often with frets removed or additional frets installed, “heavy metal” distortion pedals and phasers built into guitar bodies, blurring the lines between Haratine and Beydane musical cultures, the ancient and the futuristic. Wallahi Le Zein! was originally released as a double CD in 2010.