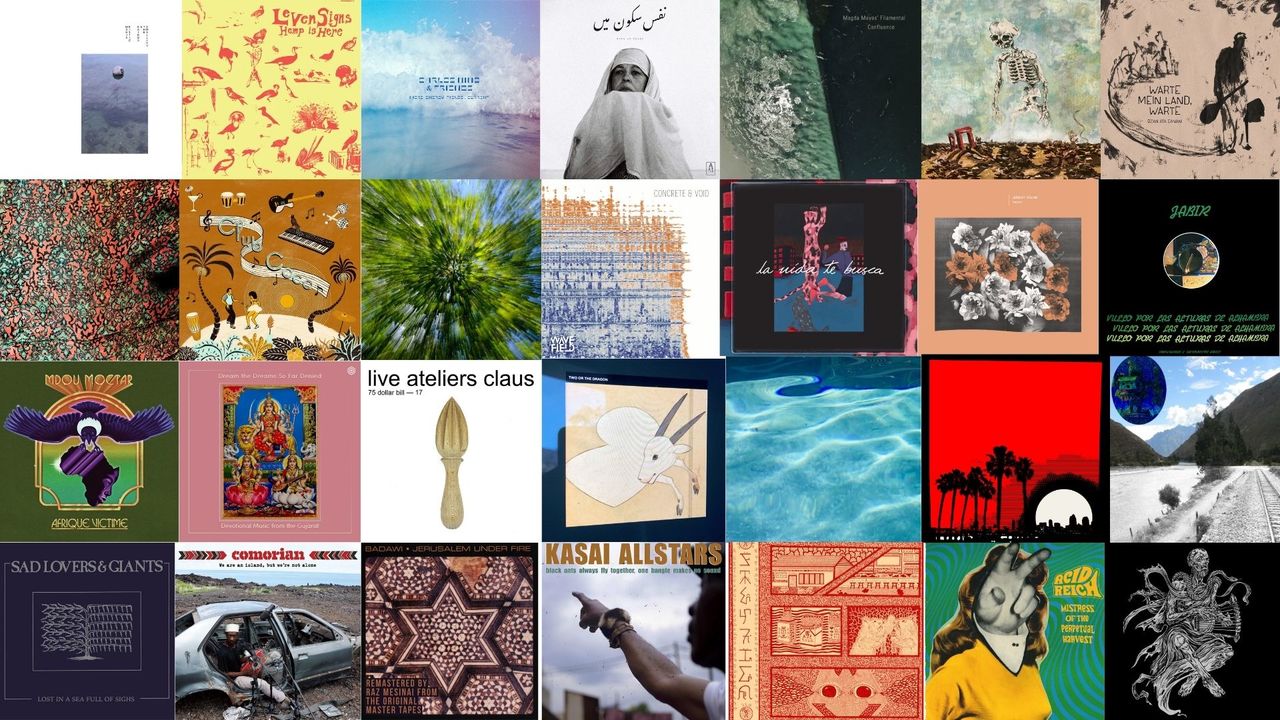 As we slowly enter the summer season, this month brought not only the joy of life, but also loads and loads of new music. Wherever you may be, in the company of imagined or real people, here's a selection of 30 albums released in May 2021 and comprising anything from sleazy post-rock to Congolese shakers, spiritual endeavours, weird sounds and nostalgic ambient music; and of course, let us not forget about the holy universe of jazz; both new and reissues.

From Badawi to Carlos Niño 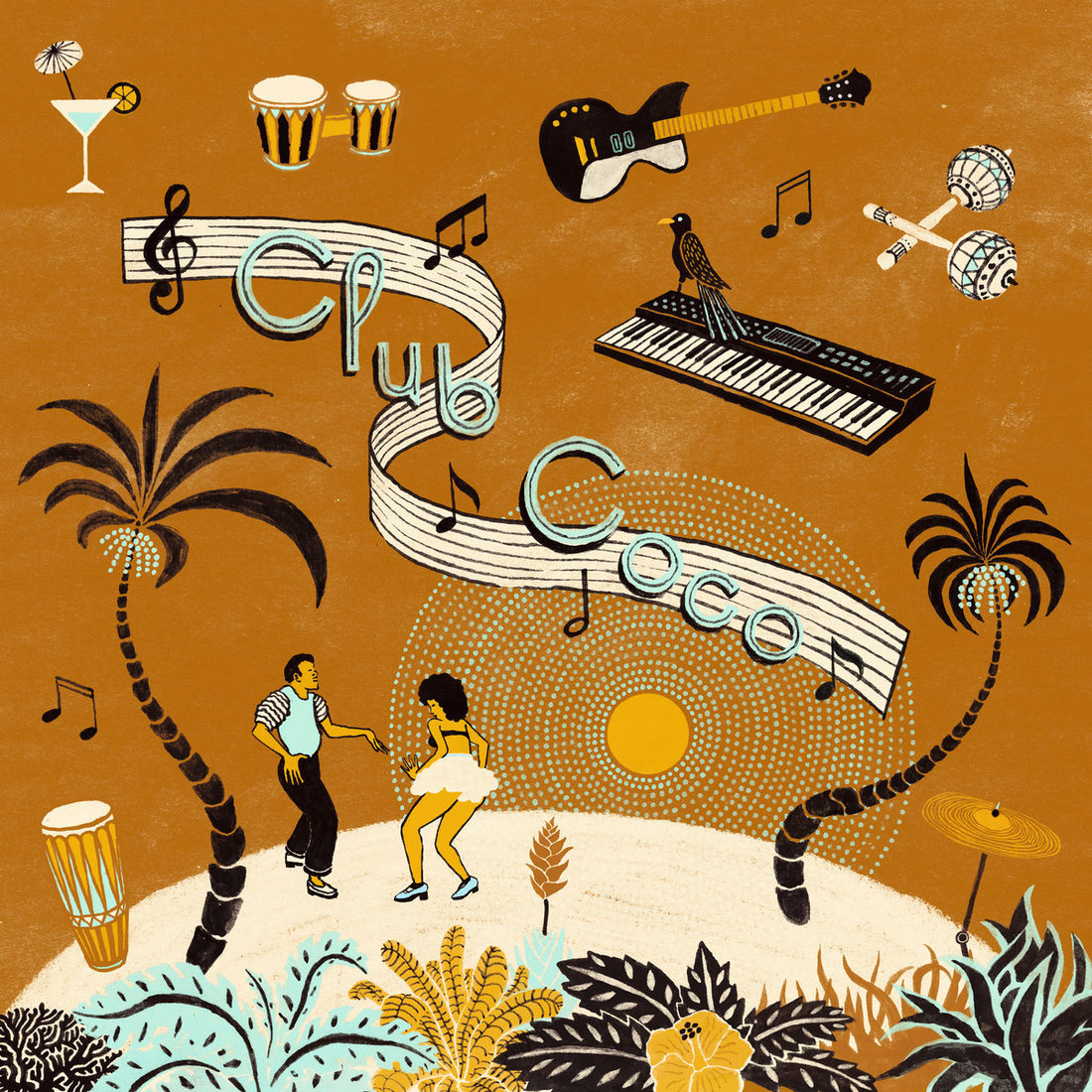 V.A. - Club Coco (Les Disques Bongo Joe)
75 Dollar Bill - Live ateliers claus (Les Albums Claus)
"75 Dollar Bill came to perform at les ateliers claus twice - in very different circumstances, but never uneventful. The first passage was in November 2016 as a duo formed by Che Chen & Rick Brown. A few days prior to this gig Donald Trump just got elected and the general atmosphere was low to say the least. In 2019 they came back with Andrew Lafkas on bass, politics were forgotten for one night, and they rocked a full house with instruments that just made it in time for the last gigs of their European tour. This live ateliers claus release is a compilation of both passages. Che Chen and Rick Brown edited & chose the tracks themselves, four tracks from 2016 and two tracks from 2019."

Badawi - Jerusalem Under Fire (25 Year Anniversary Remaster) (UPA Recordings)
The Badawi project, active 1995-2007 was produced by prolific musician/composer Raz Mesinai/ Mesinai was born in Jerusalem, Palestine and raised by a single mother in the Upper West Side and Harlem. An acclaimed Dub Producer and percussionist, Mesinai’s Badawi project has become synonymous with the sound of war and crisis in the middle east.

Carlos Niño & Friends - More Energy Fields, Current (International Anthem)
More Energy Fields, Current is a definitive new peak in the recorded continuum of prolific producer/percussionist Carlos Niño. Featuring heavy contributions from many of the most exciting instrumentalists in the creative music constellation of Los Angeles (of which Niño’s has been a central force for over two decades), the album collects 10 pure gems of collaborative communication helmed by the Southern Californian sage, elegantly presented in his unique “Spiritual, Improvisational, Space Collage” style. 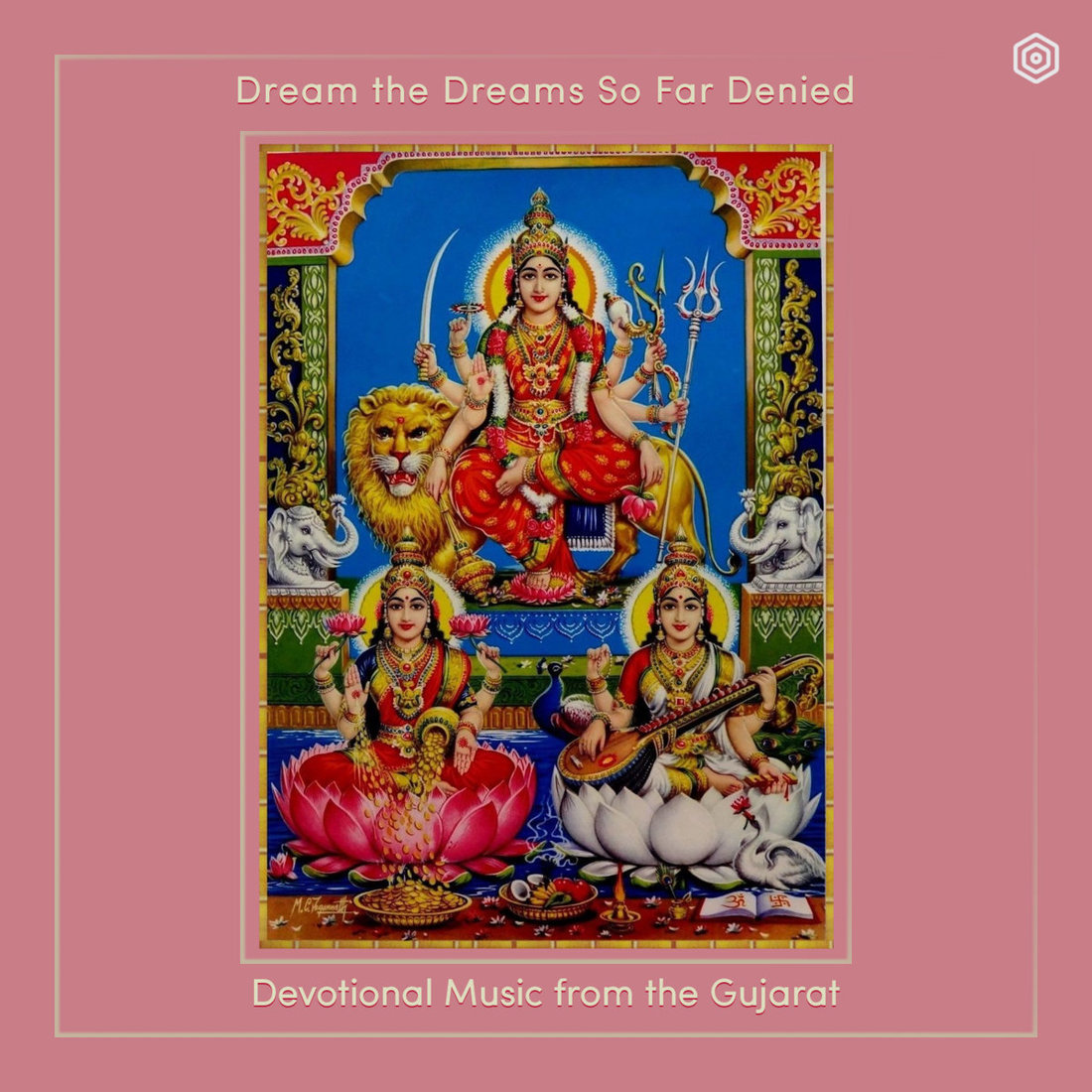 From Decha to Jabir

Comorian - We Are an Island, but We’re Not Alone (Glitterbeat Records)
Sun-baked instrumental meditations played on local string and percussion instruments. Yearning vocals and songs that evoke the mystifying realities of everyday life. Recorded live and outdoors on Grande Comore island by acclaimed producer, Ian Brennan (Tinariwen, Ustad Saami, Zomba Prison Project). The Comoro islands are known locally as the “islands of the moon.” We are an island, but we’re not alone” provides a vivid opportunity to hear unvarnished, original songs from this region.

Decha - La vida te busca (Malka Tuti)
After her debut from 2019, multi-disciplinary artist Viktoria Wehrmeister (also known as the "better half" of Tolouse Low Trax on their lovely collaboration project Toresch) is taking a step forward with her newest creation ‘La Vida Te Busca’ (“Life is looking for you”), not only refining her approach to songwriting, but pushing her own unique sound even further.

V.A. - Dream the Dreams So Far Denied: Devotional Music from the Gujarat (Hive Mind Records)
Our friends from the great Hive Mind imprint made this 60-minute mixtape of devotional music from Gujarati cassettes. The line "Dream the dreams so far denied" comes from a piece of popular Hindu devotional poetry in honour of the goddess Durga. All money resulted are donated to Phil and Lailla's Best Foot Music COVID appeal for India. You can learn more about their efforts to raise funds here.

Jabir - Vuelo Por Las Alturas De Alhambra (Discos Transgénero)
Vuelo por las Alturas de Alhambra was originally published in 1988 on Discos Esplendor Geométrico and it is a hidden gem in the catalogue of this influential Spanish label. The album unfolds a series of subtle and mesmerizing compositions inspired by the legacy of Al-Andalus, the muslim Spanish civilisation. Both a polymath and erudite musician, Jabir decided to pay homage to the marriage of spirituality and science present in that bygone era. For that aim, he relied on a vast array of acoustic instruments (ney, violin, ud, bendir and daf), as well as on digital synthesizers and a complex system of computers able to generate aleatory melodies in Middle Eastern scales. 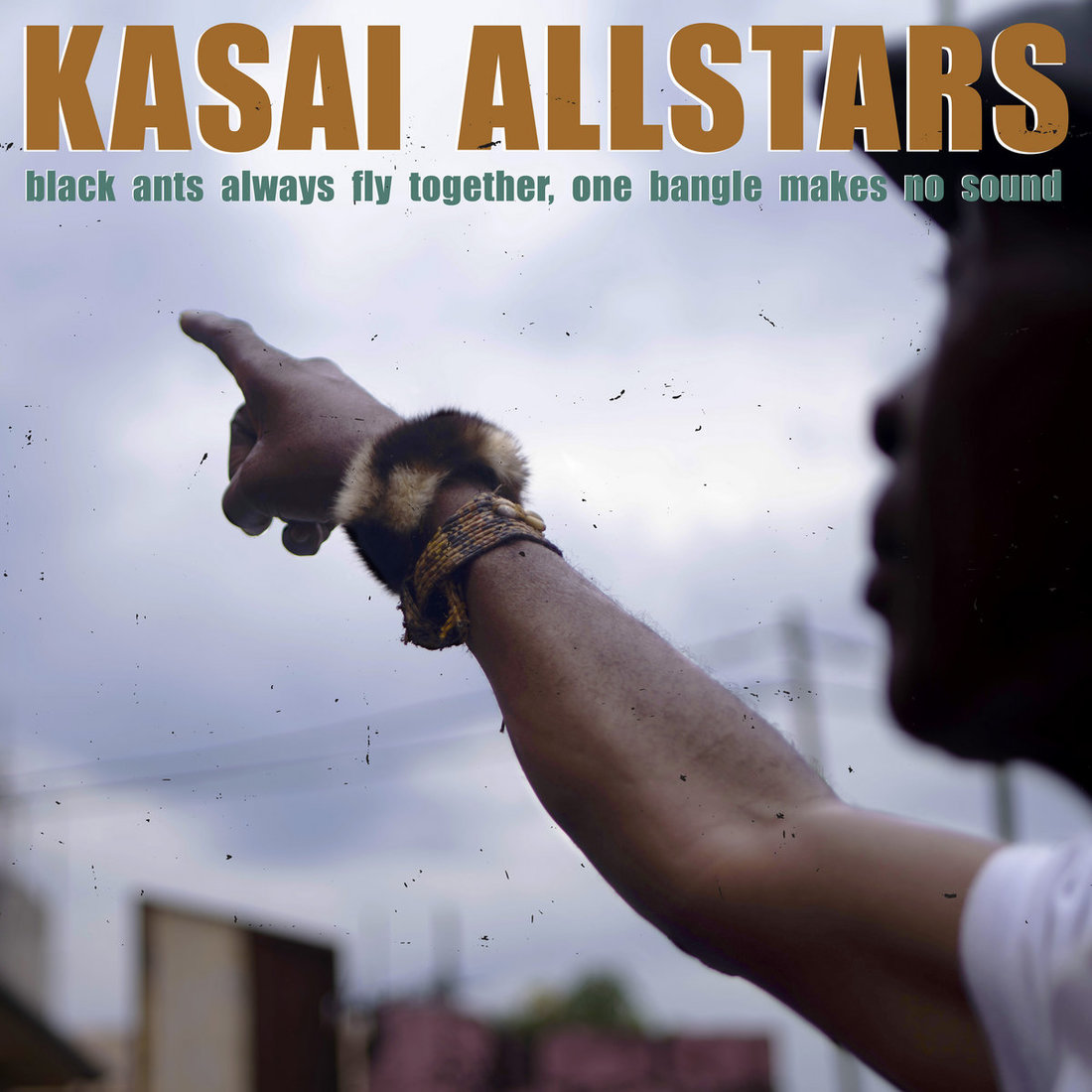 From Jaubi to Leather Rats

Jaubi - Nafs at Peace (Astigmatic Records)
Pakistani based instrumental quartet Jaubi continue the Nafs journey, which commenced with the single “Satanic Nafs” released in March 2021. The band draws now on the elements of North Indian classical music, Hip-Hop and modal/spiritual jazz in their debut LP entitled Nafs At Peace.

Kasai Allstars - Black Ants Always Fly Together, One Bangle Makes No Sound (Crammed Discs)
Kasai Allstars is a fabulous collective which consists of no less than fifteen musicians from five ensembles from the Kasai region, is one of the most exciting bands in Kinshasa, Democratic Republic of Congo. This is their latest effort, a playful, energetic and vibrant album.

Leather Rats - No Live ’Til Leather '98 (Bokeh Versions)
Leather Rats were seemingly a late 90s punkish psychobilly act blessed with a huge-sounding Japanese following. Their mix of Cramps-esque trash sensibilities, Munster Records kind of psychobilly disease and garage mod (with a hint of Creedance) might not be that unusual.

Leven Signs - Hemp Is Here (Futura Resistenza)
In 1985 a wondrous album titled Hemp Is Here was created by the obscure English duo Leven Signs, composed of Pete Karkut and Maggie Turner. Since then, Hemp Is Here has proven to be a visionary recording that holds a special place in the ongoing expansion of experimental music. Through the method of tape collage, an unclassifiable recording was created that consisted of post-punk and avant-pop sounds, tribal rhythms and dub and folklore elements. 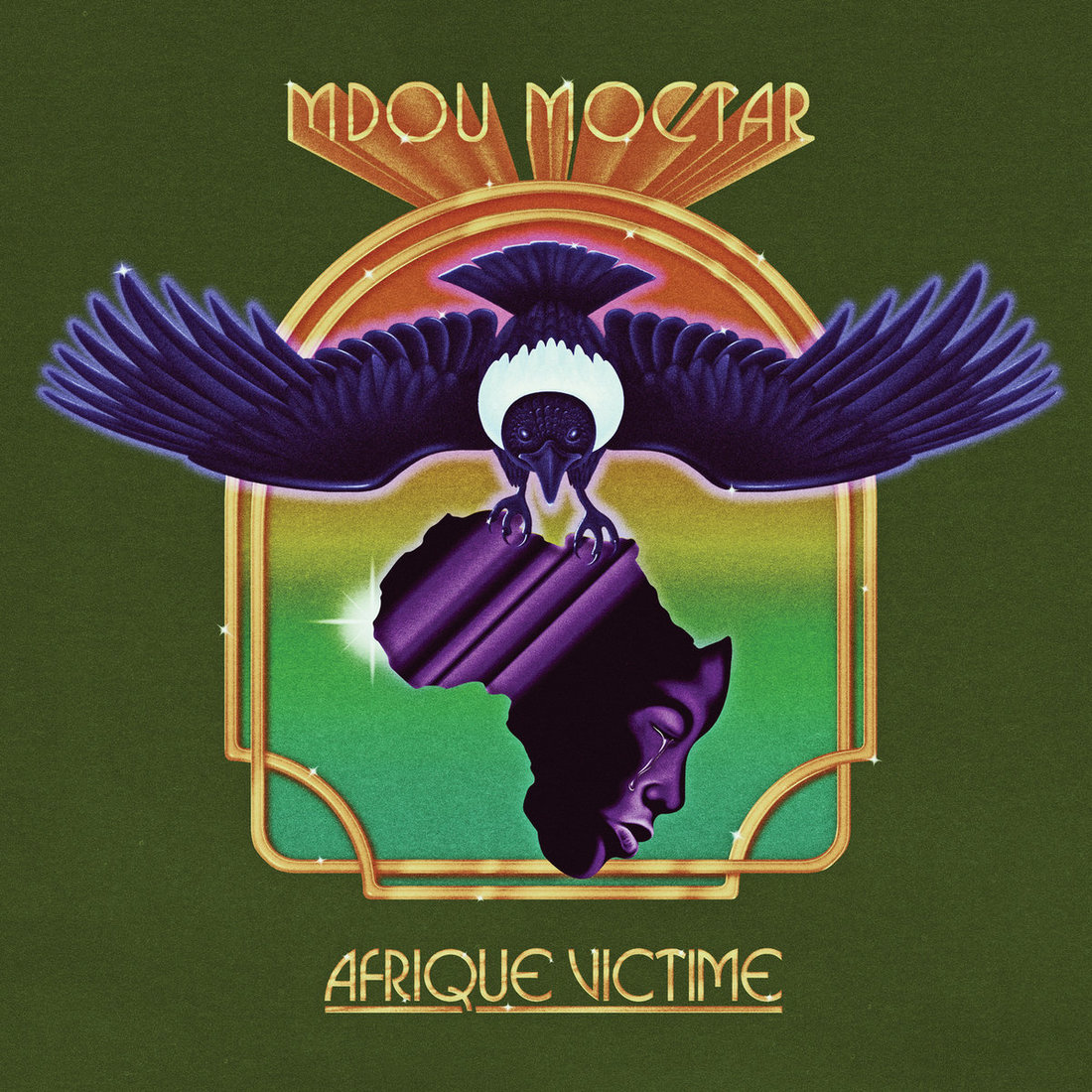 Magda Mayas' Filamental - Confluence (Relative Pitch Records)
Berlin based pianist Magda Mayas has put together a large string ensemble commissioned by the "Music Unlimited" Festival in Wels, Austria in 2019. The ensemble name refers to filament, a filigree fiber, or a thread, a texture that is playfully explored, a psychologically embodied state and approach - Filamental. For the ensemble she developed an open, minimalist photo score - Confluence. "Two rivers meet and merge in Geneva – the Rhône and the Arve. They have different temperatures and colours; the Arve is more rapid and carries white sand, while the Rhône is darker and slower. They travel through different terrain, they carry different volumes of water and have different depths. The score consists of 12 photos taken over an hour or so, observing the merging waters, the artificial wall dividing them, the earthy, blue and green colours blending."

Manja Ristić - Kairos & The Dwellers (Forms of Minutiae)
Manja Ristić, born in Belgrade in 1979, is a violinist, sound artist, poet, curator and researcher active in the fields of electroacoustic and classical music, instrumental improvisation, and experimental sound art. Currently working and living on the island of Korčula, Croatia, she combined in her latest album Kairos & The Dwellers unprocessed and processed field recordings into electroacoustic narratives, investigating the historical and ecological richness and fragility of the Korčula island and its encircling sea.

Ozan Ata Canani - Warte mein Land, warte (Fun in the church)
"The Anatolian people of Germany had created their own great structure of music dissemination. They were not dependent on the radio and the department stores. They had their own shops, everywhere. Unnoticed by the German music industry and the local media, companies like Türküola in Cologne or Uzelli in Frankfurt turned over millions of records every year. (…) The coexistence of music is a symbol of coexistence in society. Young Ozan Ata Canani invented togetherness, but nothing more than a few small gestures jumped out."

Pak Yan Lau - Bakunawa (Cortizona)
On Bakunawa Pak Yan and her ensemble are delving and digging deep into the sound spectrum of detuned toy piano’s, second hand gong rods, prepared harp, metal tubes and ring modulators. Instruments were searched, collected and bought worldwide: on Japanese street markets, in second hand stores in Brussels, from dedicated American Ebay-sellers and the cellar of the Musica centre in Neerpelt. 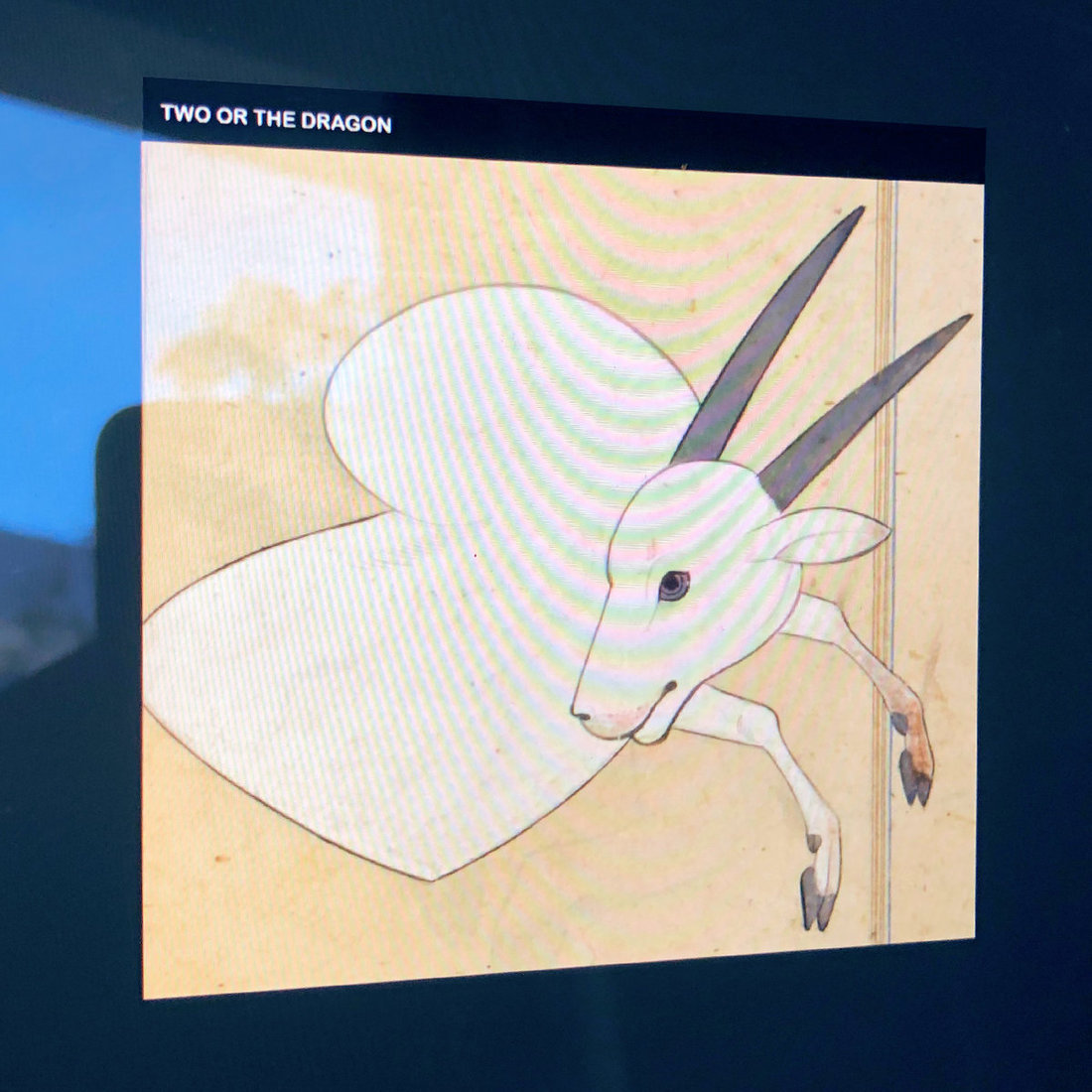 Two or The Dragon - Dance Grooves For The Weary (Ruptured Records)

From Tomás Tello to Two or The Dragon

Papiro - La finestra dentata (Marionette)
La finestra dentata (The Toothed Window) is a new album by Papiro, published by the Marionette imprint and including both studio and concert recordings from 2016–2020. Brilliantly produced, the music of this album evokes a sense of transcendence, portraying imaginary creatures and environments.

Tomás Tello - Tar (Andesground Label)
Over the last decade, multi-instrumentalist Tomás Tello has been developing his own personal music style based around an exploration of the guitar and his intense personal investigation of traditional Peruvian music - in particular Andean culture which he grew up with. His latest release Tar comprises a collection of works with string instruments, such as charango, gembri and guitar.

Two or The Dragon - Dance Grooves For The Weary (Ruptured Records)
Two or the Dragon is the electro-acoustic duo initiated in 2014 and comprising Lebanese musicians Abed Kobeissy and Ali Hout. The duo’s unapologetic approach to traditional Arabic music hints at deconstruction, dance grooves, industry, satire and a deniable melancholy. Hout and Kobeissy approach Beirut’s industrial vistas both as a local aesthetic and a main element of their work: the unique sound of processed buzuq (Levantine long-necked lute) and percussion, combined with the two musicians’ rich background in traditional Arabic music, takes the sonic, visual and pseudo-political day-to-day that is Beirut and reflects it onto a hyper-realistic soundscape.

Viv Corringham - Here in Our Distant Corner We Wait (Linear Obsessional)
Viv Corringham is a British vocalist, composer and sound artist, currently based in New York, who has worked internationally since the early 1980s. Her work includes music performances, audio installations and soundwalks. Her ongoing project Shadow-walks has been presented in gallery shows from New York to Istanbul to Hong Kong. She is a certified teacher of Deep Listening, having studied with composer Pauline Oliveros. Here in Our Distant Corner We Wait is an engaging and fascinating collection - Viv uses her voice, both pure and treated, to create intimate explorations within a very human realm. It finds her making some her most personal and explorative music.

Wavefield Ensemble - Concrete & Void (New Focus Recordings)
Wavefield, a New York City based contemporary music ensemble founded in 2016, releases its debut recording "Concrete & Void" featuring works recorded in October 2020 in an outside parking garage in New Jersey, an environment which facilitated social distancing as well as collective music making. The recording is as much a byproduct of their ongoing relationships with longtime composer collaborators and an openness to a wide range of notational contexts as it is a document of the resiliency of the creative impulse during a trying year.