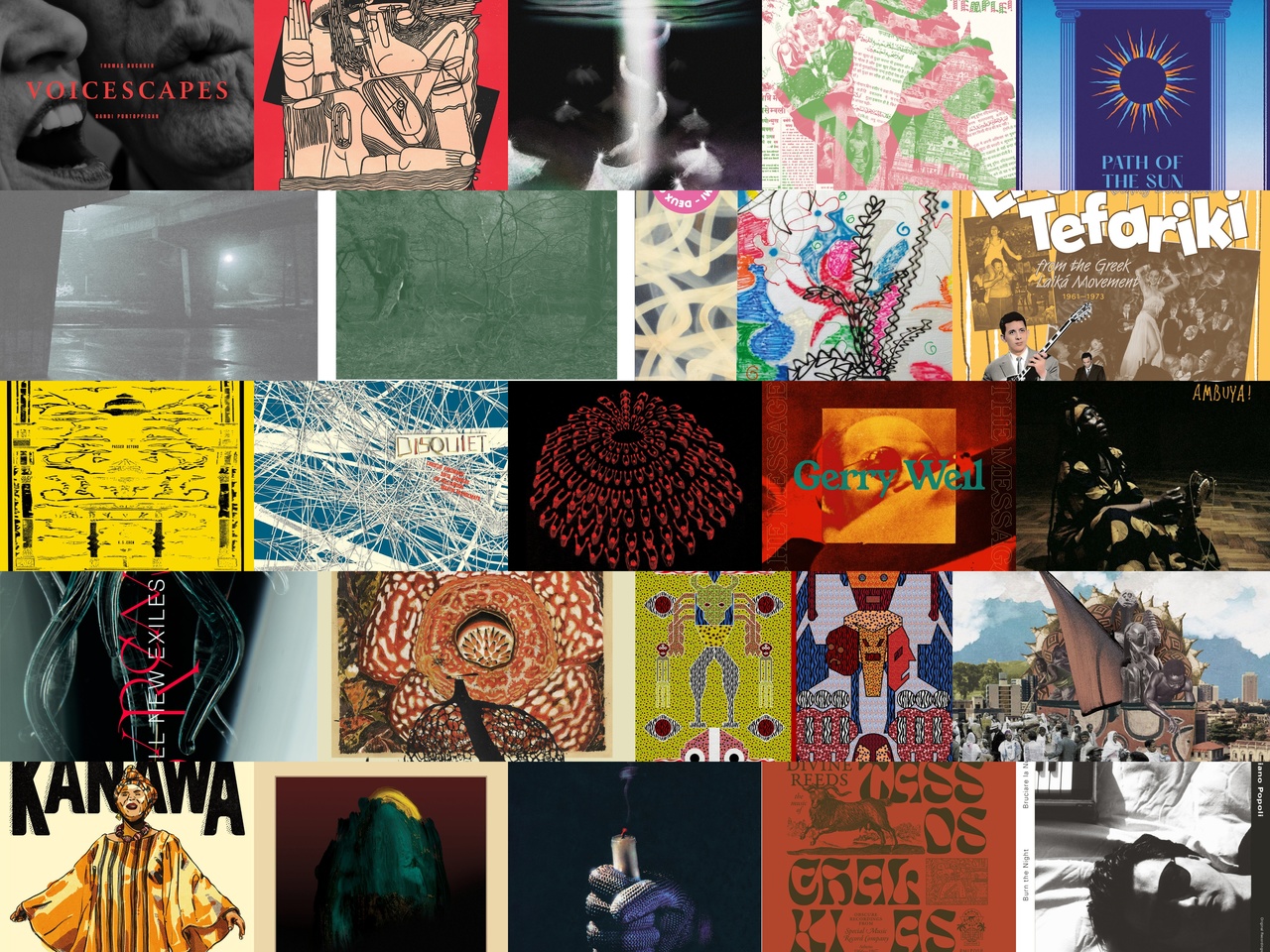 Apparently there are high hopes and expectations from 2021, so the first month of the new year started in full force. Here's 23 albums and compilations comprising anything from psychedelic rock to free jazz, improvised music, ethnic, ambient, electronic hybrids of all sorts, both new and reissues.

From Bernard Szajner to Disquiet 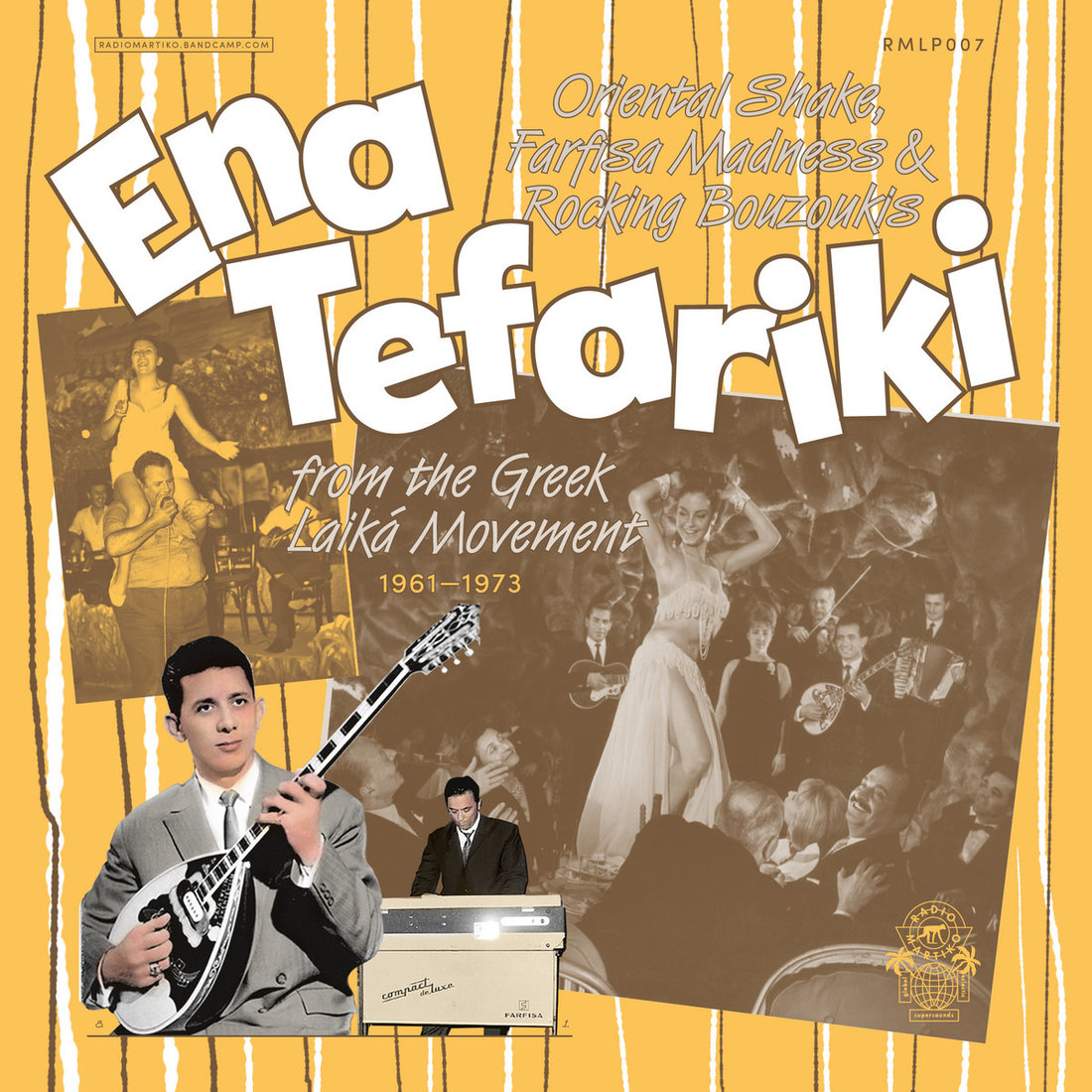 V.A. - Ena Tefariki (Radio Martiko)
A Strange Wedding - Black Magic Rituals (Worst Records)
Black Magic Rituals is a wizard’s book full of smart spells to open the space and time continuum. Whether it is made of shimmering stratospheric soundscapes or built in between constellations of the inner world, A Strange Wedding goes beyond his own forms to explore half-step industrial leftfield dub as well as mental-driven deep techno in the style of Italian masters.

Bernard Szajner - Some Deaths Take Forever (Cortizona)
Recording an album about the feelings of two prisoners waiting on death row, as a statement against capital punishment, was (and even still is nowadays) a delicate and ambitious plan. Bernard Szajner did it in 1980, after watching an Amnesty International documentary.

David Fenech & Klimperei - Rainbow de Nuit (Marionette)
The latest release of the Marionette imprint presents the efforts of French duo comprising melodist Christophe Petchanatz (aka Klimperei) and David Fenech. Their debut album called ‘Rainbow de Nuit’ evokes subtle pieces of experimental and improvised jazz, chansonesque songs, bluesy folk, and outsider music rolling harmoniously across the record. From music boxes and walkie-talkies down to plastic straws, plucking various stringed instruments such as the charrango and banjo, kazoos and snake-charmer ocarina and flutes, all the way through the sweet accordion and melodica, found and traditional tuned percussion.

Deux Control - Sex Miami (Höga Nord Rekords)
This album by Deux Control is a smooth genre crossover paradise of 808s, Yamaha keyboards and deep mesmerizing vocals side by side with more hardcore synth elements found in bands like DAF or Nitzer Ebb.

Disquiet - Disquiet (Trost Records)
Disquiet is a special quartet that came together on the stage of the Konfrontationen festival in 2018. Initially formed and lead by Austrian electronic musician Christof Kurzmann, the project is reflecting the difficult political situation of the refugee movements to Europe – and how politicians deal with it in a selfish and unhumanitarian way. Christof Kurzmann, Sofia Jernberg, Martin Brandlmayr (Radian) and Joe Williamson reinterpret and process in quiet waves of emotions and thoughtful lyrics - concentrated music between serenity and sheer beauty.

V.A. - Ena Tefariki (Radio Martiko)
These 20 carefully selected songs serve as an introduction to this mind-blowing music for the non-aficionado. The extended and illustrated liner notes take you back to the heyday of Greek pop music and put this cultural movement into an historical perspective.

From Foudre! to K.S. Eden

V.A. - Exotic Ésotérique Vol.3 (ArteTetra)
Italian imprint ArteTetra return with the third volume of their Exotic ésotérique series of compilations showcasing contemporary bits and pieces from (almost) all around the world. The compilation selects 30 vigorous, phantomatic and edgy songs, "from the grotesque to the hazy, to the hypnagogic and absurd til the utterly whimsical; often resulting in non-linear audio experiences with humoristic and paradoxical outcomes."

K.S. Eden - Passed Beyond (Stroom)
Growing up in Stockport in the 1970s, Kevin Eden is one of those artists who did not receive the credit for their work during the years they were active. Eden (now Veerji Hasyananda, a name given to him by Laraaji after he has embraced the Vedantic Advaita tradition), looks back at the work featured on this compilation with a comfortable detachment because in his view these recordings were made by a different person to who he is today. Rather than harbouring feelings of regret or frustration that his output did not reach an audience, he feels blessed for it to have another opportunity today. 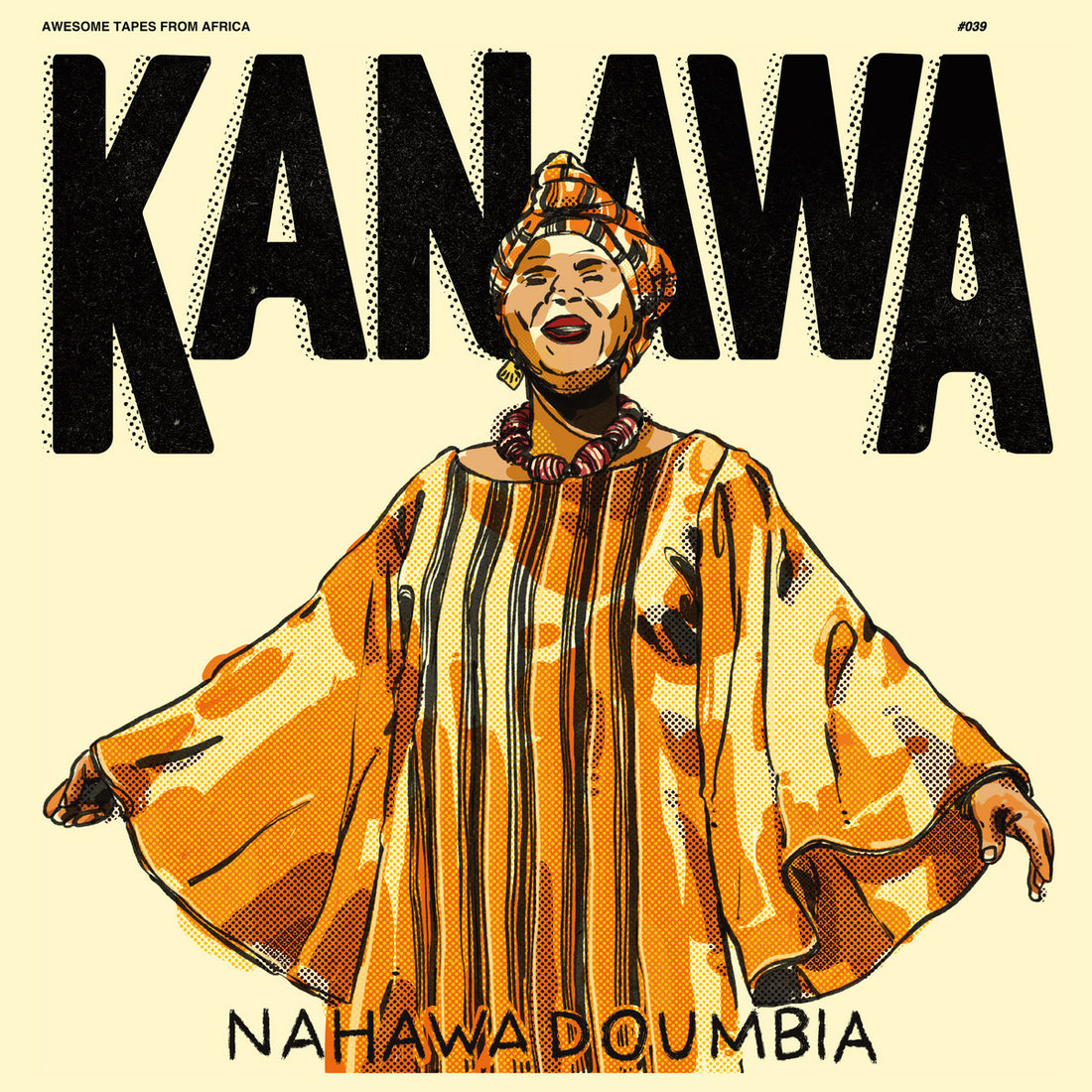 From Laure Boer to Nahawa Doumbia

Laima Adelaide - Modern Nature (Annulled Music)
The first release of the year from the Spanish imprint Annulled Music is signed by Laima Adelaide. Modern Nature encompass a mystical sonic journey through ambient, techno and electronics. On his debut, he says: "my main inspiration is exploration: Walking in the forest. Footsteps become rhythm. Leaves become noise. The movement of trees becomes ambience. Each of the tracks is a study of an unknown environment which forms itself in my imagination."

Laure Boer - Agate et la pierre de Sable (Kashual Plastik)
Memories like fires glow, time keeps cutting at your soul: when listening to “Agate et la pierre de Sable”, a tape with two deeply thrilling journey music poems, the mind of the deep listener takes off. Off into the vibrant, mystic, folk-not-folk world of Laure Boer and her free-spirited approach on ritualistic music beyond the ritual. It might get lost in her minimal chanting, her India-leaning melodies, echoing feedbacks and endless loops of revelation. Some Moondog spirits wave veiled and psychic illusions trigger the meditation. But no worries: every soul returns in good order, eased by a droning whiter shade of pale.

Nahawa Doumbia - Kanawa (Awesome Tapes From Africa)
"The meaning of “Kanawa” is so simple. We see our children trying to cross the ocean all the time. I said that many of our children die in the ocean and some of them while crossing the Sahara. Some climb over the wires across the borders and they have gotten shot. We have asked them not to leave and instead stay home. But I ask them why do they leave their country? Why do they decide to go? They said that they leave because of the family situation or problems, poverty, and unemployment. We told them if ever they are to leave, they should privilege legal ways. They should abide by laws vigorously when they are to emigrate. That’s better than hiding in boats or adopting other illegal means. I ask them to stay and work in their country. So that we can help each other find a solution to this problem. I call on the UN and African leaders so that we can coordinate our efforts to find a solution, to create jobs for them so that young people stop leaving. This song is about that message and I chose it as the title of my album because I like it. My choice is because it is very meaningful and it is something we see on a daily basis. I chose it in order to alert and sensitize everybody about this question of illegal immigration. To sensitize our brothers and sisters. It is a message. That’s why I chose it as the title of my album so that everybody can learn from it and also so that there is a reduction in the number of people emigrating. To sensitize them so that some can stay home and grow the land. Leaving is not the only solution. That’s my message" says Nahawa Doumbia.

Path of the Sun - Path of the Sun (Inner Islands)
Path of the Sun is a collaborative project between Daniel Guillén and Steve Targo, known for their solo endeavors as Lunaria and Inner Travels, respectively. The two musicians share on this album (composed of two long pieces) an interest for esoteric thought, and perhaps an underlying spiritual practice guiding their work in sound.

Randi Pontoppidan & Thomas Buckner - Voicescapes (Chant Records)
Randi Pontoppidan and Thomas Buckner started singing together almost immediately when they met in 2017. In 2018, they recorded at Karmacrew Studio with engineer John Fomsgaard, on the beautiful island of Møn, Denmark. With no preconceived musical material, no overdubs and no sound sources other than voices, “Voicescapes” documents the spontaneous music of two kindred souls.

Pneumaton - Concren (self-released)
Mitoș Micleușanu was born in Bakhchysarai (Crimea), lived and studied arts in Chișinău (Moldova) and Cluj-Napoca (Romania). He is a multidisciplinary artist, being involved in a wide range of artistic projects, from experimental music to poetry, photography and visual arts. This is his new self-released work under one of his aliases for experimental music, Pneumaton. 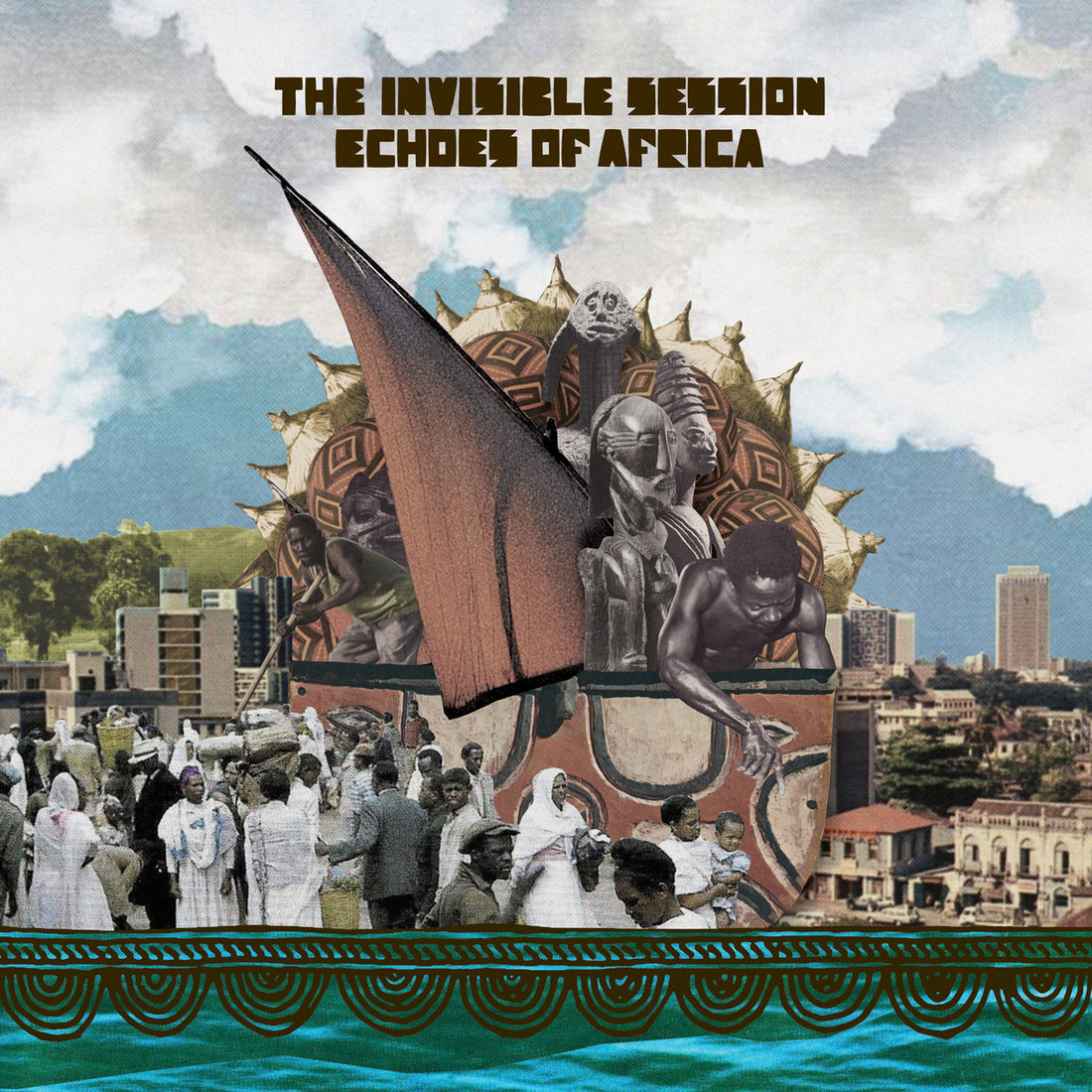 From Stella Chiweshe to Tiziano Popoli

V.A. - Sirens (Exiles)
Sirens is a compilation of 20 songs put together by the Hungarian imprint Exiles. Dominika Trapp writes: "Sirens appear mostly in groups and they rarely sing in unison. The voice they make does not come from the same place as orderly explanations, but grounded in the belly and below. The goblets they hold in their claw-fingered hands are filled with various dark liquids – luring for those who are willing to get dirty for knowledge, sickening to the ones who detest the complexity of truth." All the digital album purchases are donated to The Women For Women Together Against Violence Association (NANE).

Stella Chiweshe - Ambuya! (Piranha Records)
Stella Chiweshe is a musician from Zimbabwe, known globally for her singing and playing of the mbira dzavadzimu, a traditional instrument of the Shona people of Zimbabwe (a Bantu ethnic group native to Southern Africa). In her home country, she is called Ambuya Stella Chiweshe as a sign of utmost respect. Ambuya! has been the artist's international debut, originally published in 1987. The album has been remastered and is now available once again through the Piranha imprint, including as a bonus a few titles from the '88 recordings that took place at John Peel's BBC Radio show.