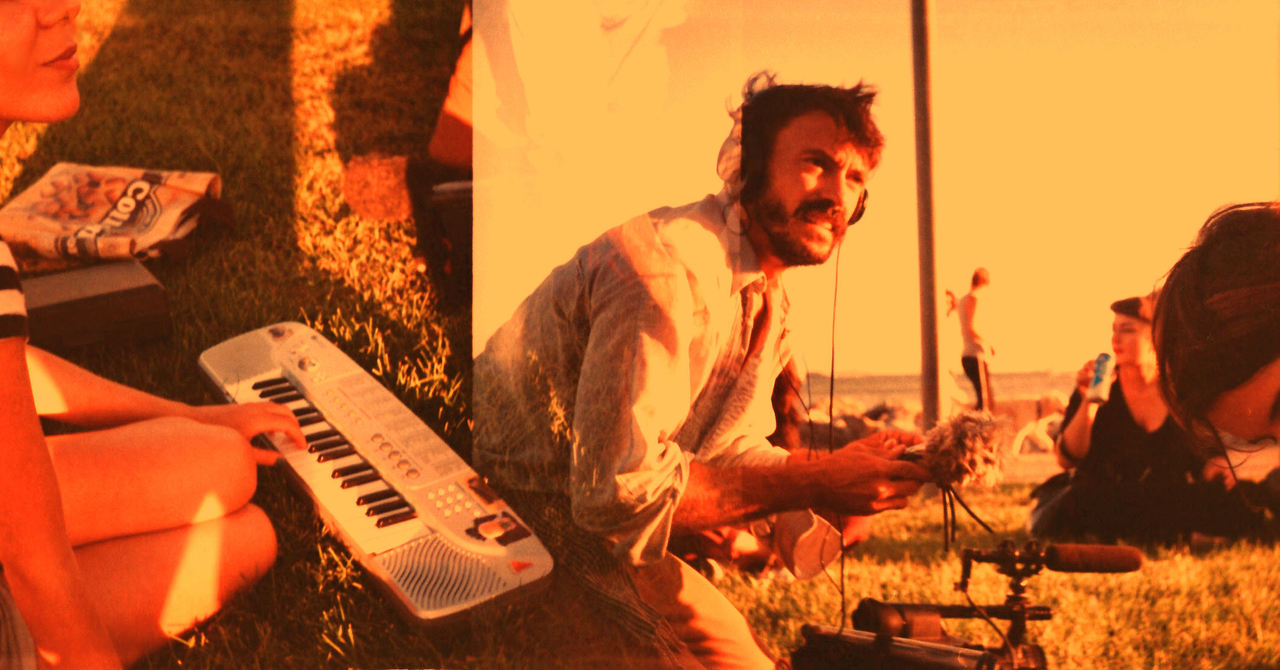 And the mushroom said...

My own work, which evolved in the past ten years from exploring the diversity of music around the planet with the language of cinema, to researching relationships between vibrations and consciousness in the course of various ceremonies, has been fuelled a lot by the re-emergence of shamanic tools - something very much “in fashion” nowadays, but nevertheless central to the human relationship with nature since the beginning of humankind. 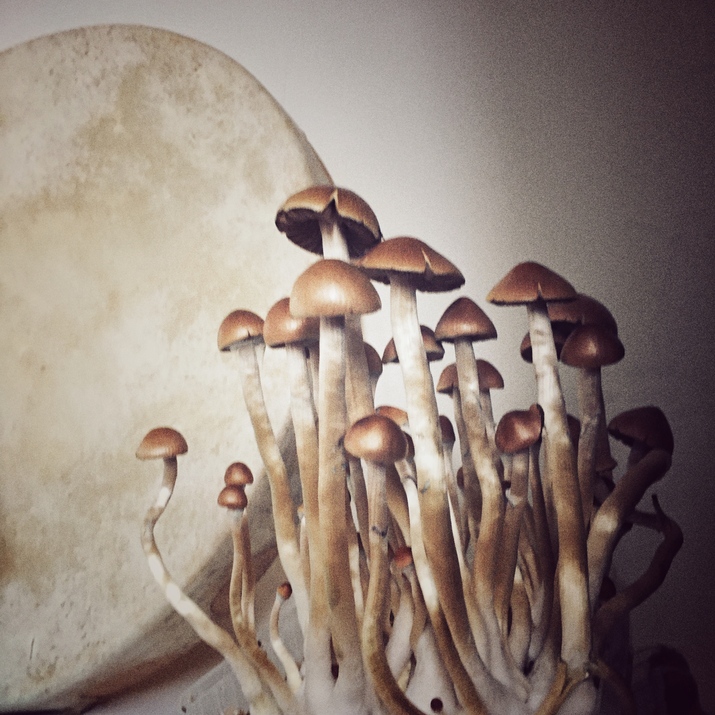 The mushrooms and the drum. home ritual.
The topic is very much on the table – a table of a very stimulated society, for sure, addicted to new experiences, and sometimes craving to just ‘feel better’. But close studies of the psychedelic realm and the historical factors show just how much the past civilisations used such paths to make emerge various forms of knowledge and consciousness, and evolve through that direct relationship with what some might call ‘the Gaian mind’. It’s of course not the only path, neither the best, but…

It’s a fascinating time we live in. And everybody has a word to say about it. Some will see this aspect (‘the switch to a higher ecological society / the wake up call for another level of consciousness’) or that one (‘losing at high speed some basic freedom rights / the shock doctrine already at work’), depending on what you want to see in such chaos. It probably mostly reflects our own priorities, and the reaction we have with it is obviously deeply linked to our own material situation – at this moment of writing I have no kids, live a very simple DIY life with my partner, have no shop being closed for an X amount of time, neither a real structure with employees to sustain… So I am probably more leaning on the positive side of things, even though I learned something crystal clear over the past years – we have absolutely no idea of what’s coming next – or to put in the words of visionary poet Terence McKenna, “It’s gonna get weirder and weirder”.

Our current story was never before published to such a large amount of readers, ever in the history of humankind. It’s an immensely unsettling and deeply exciting situation too. It could give birth to massive trauma for people unprepared for such a catastrophic situation, in our hyper-connected global age where news (especially the bad ones) are helping the system sustain itself.

It seems particularly interesting to me to already see (I mean, we are only 1 to 2 months in for most of us) the re-emergence of healing practices on a global scale. Meditation courses, breathing workshops, tantra virtual lessons, dream procedures and so on… Nothing new, some might object, but it’s truly reaching a much larger scale of the population, suddenly. At least where I come from (French hardcore rationalism in which I grew up) – the simple fact of imagining my own mother reading a book about Near-Death-Experiences and getting interested in the Tibetan Bardos would have been impossible a few years back.

Artists, a group or collective I feel mostly part of, are especially impacted by such events on an economical side – but I do believe we are also talking about a community, or maybe the community, which is more able than any other one to reorganise itself quickly, and invent new forms of living together. It’s already happening as I am typing. 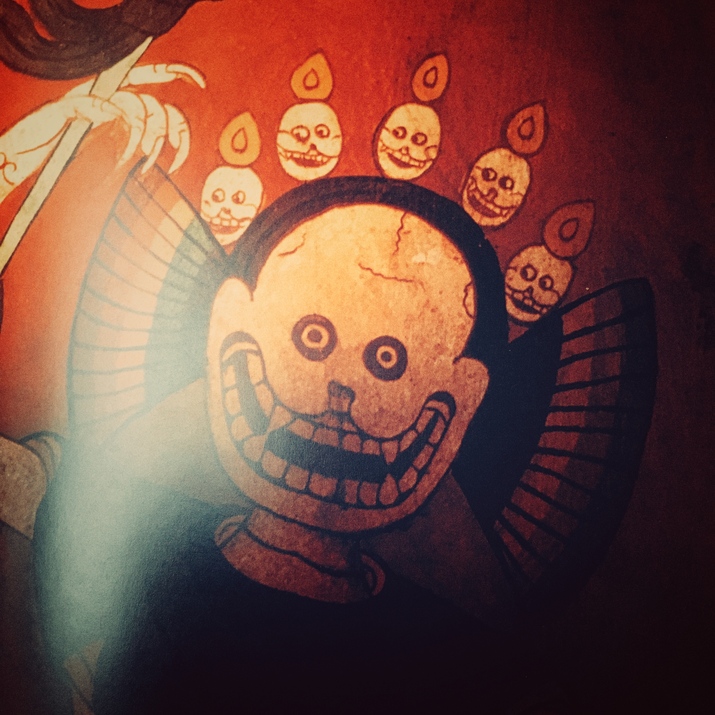 The lord of the graves, painted on a door of a temple in Kathmandu. original photo by Thomas L. Kelly

On our side, we are envisioning to re-shape our practices (which were, to be honest, based a lot on traveling) towards the local community, experimenting with healing protocols – we are gonna let people, anybody in a certain geographical area, invite us to their place, to create a unique form of ‘improvised ritual’ – mixing cinema, music therapy, talks and more, all of it exchanged with some donations. It might not be much on the money side, but I am pretty certain it’s gonna be a lot of deep exchanges with people – and a lot of fun.

As we might see the closure of music venues, cinemas and museums for quite a while, it might also be a great way to experiment and bring people together, differently. Reclaiming other places for creation, reclaiming the streets too. Civil disobedience meeting consciousness-oriented practices. Spiritual anarchism.

I do believe strongly that this epidemic period will act as a switch towards another approach to arts – we might have lost, as some thinkers do believe, the original meaning of "creation", towards too many ego-driven forms of expressions, where the final object contains its own ending. A lot of what’s to come will be touching on a renewal of the imagination, in an open-ended form, a form allowing anybody to complete the picture, and bring it forward. Much more than what’s happening already in the art scene, the languages will hybridise themselves especially if they don’t have the economical conditions sustaining them. We can see in this a rebirth of the shamanic expression – the figure of the shaman encompassing the creator, as well as the scientist, as well as… the healer. 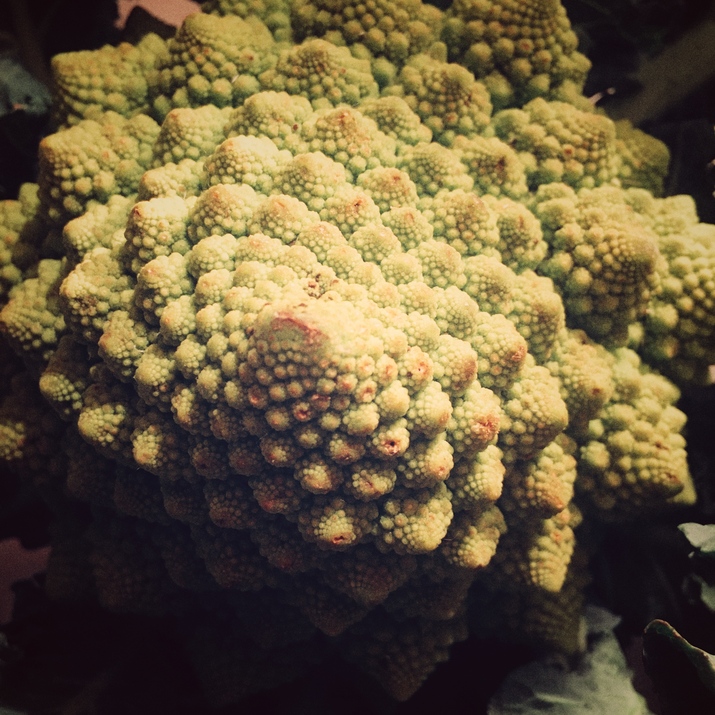 Close-up on the spirals of the Romanesco Broccoli

The rediscovery of the ‘magical realm’ of reality, which is a bit touched upon through meditation, but definitely at the very heart of psychedelic experiences, is too often a missing link in our ecological perspectives. « Nature » is intelligent, sure, but also only to the point that you believe in nature. We could use this coming period as a redefinition of such concepts, and enter into a deeper web of ‘reality’ – nature being actually a simple manifestation of our way to phrase the ‘outside world’ – and through the integration of another virtual layer on our society (think about the deep expansion of the digital world in this epidemic time) we could make emerge a more complex, and more subtle as well, definition of reality. My own feeling is that it’s only by treating everything as real, absolutely everything, that we can tap into a higher form of consciousness – and not get trapped into the ‘fake news’ issue. That feeling is at the core of the transcendental experience. Psychedelic or not.

Practices such as deep meditation, high level yogic techniques, or radical plant-based trips re-connect everything through the dive into what Jung named the Unus Mundus. It’s not a metaphor at all. They allow a rediscovery of our own subjects and objects – blurring the lines, escaping the illusion of distance, creating bridges and making emerge new thoughts in a subtle, often poetic, always comedic, manner. It’s an extremely powerful tool to live with nowadays – to see deeper inside the frame of reality, to react to the cosmic joke played by the intelligence of nature (it’s full of humour out there!), and to dance with it.

It’s time to go inside. An inner research was needed to happen, for a long time – I mean, how do we hope to balance the global interconnection of contemporary time, the massive destruction of ecosystems and its numerous problematics and the extreme relationship to the Gaian mind if we don’t do a decent job at microscoping ourselves and develop a higher form of knowledge of who we are?

Saturated minds don’t work efficiently for the mission that is demanded now. Re-invention of the way we live in a globalised society. Good luck! That’s quite challenging. And being bombarded with information is against us. After a few days where most of us, including myself, were convinced that it would be "a perfect moment to send beauty and post new films / music / books to face the sadness of the situation we're in", many of us backed off – to better blow up.

Through that saturation, we are getting disempowered from our own consciousness. Amusing Ourselves to Death was the good title of a great book from the 80s, by Neil Postman, building on McLuhan theories and especially Huxley’s dystopia as developed in his Brave New World. Huxley didn’t postulate a future where humankind would be oppressed by state control (as did for example Orwell in 1984) but an oppression coming from their addiction to amusement and the submission to information.

Such a break in our hectic times is a welcome relief to zoom out, to see the larger picture – and personally, to research on the ancient civilisations, to put a larger scope to the frantic relationship we have with our contemporary lives in the early 21st century, by picking up ideas from the philosophers of the Greek age, from the mind of ancient China, from some ancient knowledge which is still very much relevant, maybe more than ever. 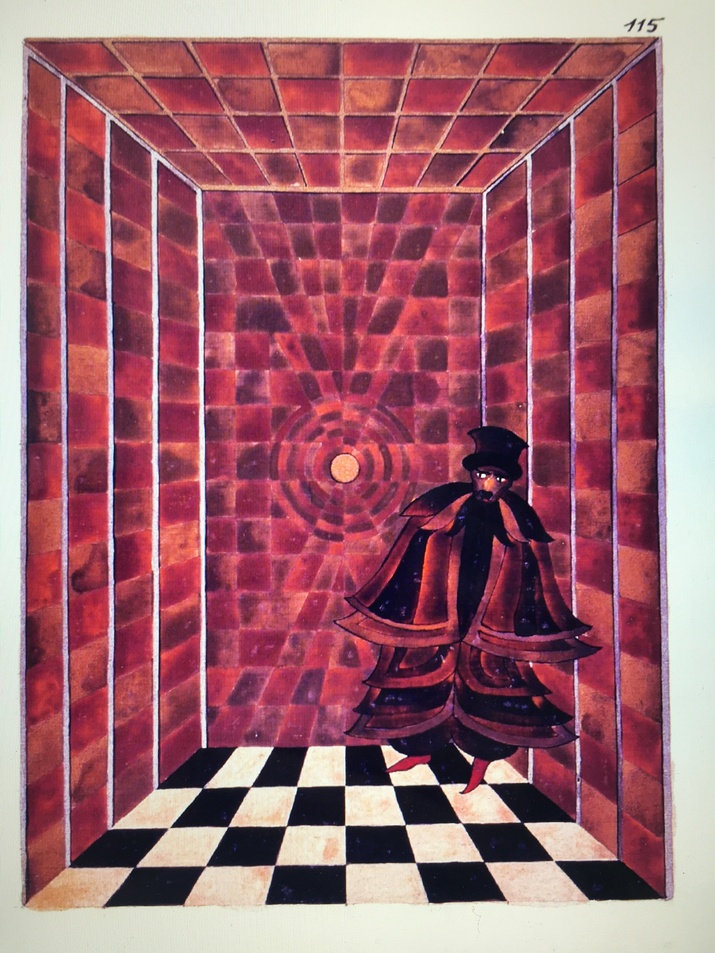 The oldest ritual of our humankind might well be the ‘Nyépi’, in Bali, on the day before the New Year, when everybody is supposed to stay at home, in silence, meditating. Maybe our time is the ‘Nyépi-demic’. Lasting more than a day, to re-balance our relationship with the planet – and with ourselves.

Maybe we can even incorporate it regularly into our global society – imagine a planet where we now have to spend one month over the twelve in silence, at home or at least not traveling further than a few kilometres around. A pause, a break, a moment of quietness. Not only to let nature regain some corners, but especially to give humankind another frame to think and feel. Ideally we wouldn’t allow people to be connected by electronic external devices during that time – but this period would be dedicated to the inner connexion, the deep dive inside, the "know thyself".

"Know thyself", the ancient greek saying who was written at the entrance of the Apollo Temple in Delphi. It was in that temple that the high priestess, the Pythia, was giving her oracles to people who undertook the 4 day long process, similar to a shamanic ritual. People were reaching the oracle to ask a question, and we're leaving with an answer, a prophecy, a knowledge coming from a woman who was probably the most powerful woman of the classical world. All the greatest thinkers at the basis of modern society, from Plato to Aristotle, from Sophocles to Diogenes, consulted her, for at least 4 centuries.

The Pythia was in a visionary state of trance, connected to a higher force. She was seated on a tripod, on top of an opening from which smoke was coming, presumably some vapours coming from the soil.
Those vapours were psychedelic.
The priestess was high.
Know thyself!

*all photos by Vincent Moon, except the opening one by Gaye Su Akyol
-- 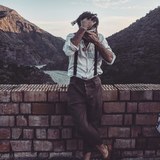 Vincent Moon is an independent filmmaker and sound explorer from Paris. Since 2009 he has been traveling the world making ethnographic-experimental films, recording traditional and sacred music, filming religious and shamanic rituals under the label Petites Planètes. His work now explores transcendent states using images and sounds, as well as the ritualistic aspects of societies and communities.

The difference between not-a-total-success and absolute-failure is often one of attitude.