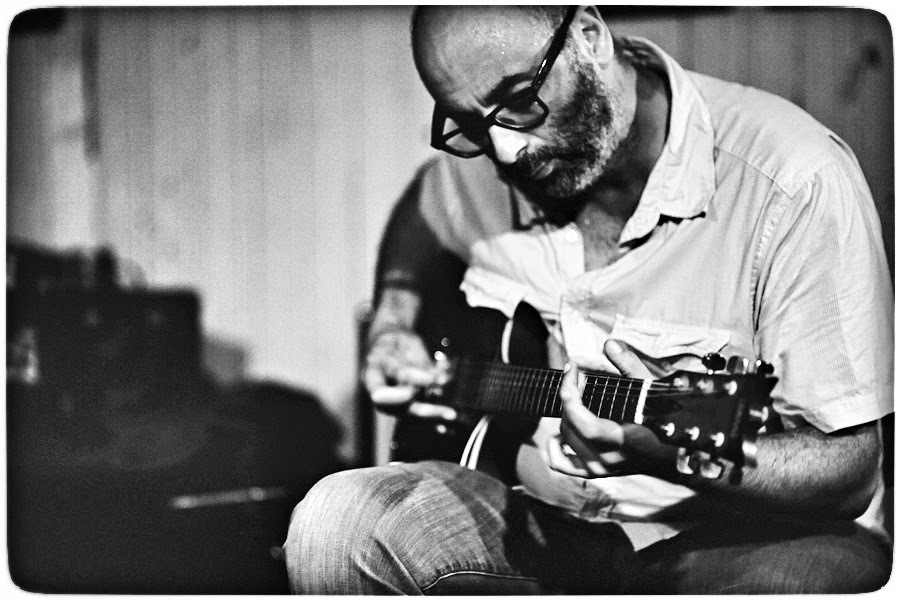 Guitarist Sam Shalabi was born in Tripoli, Libya, in 1964 to Egyptian parents. After emigrating together with his family at 5 years old in Canada, and now based In Montreal, he is a longtime fixture on the city's free improv and experimental post-rock scenes, both as a solo artist and as the leader of the Shalabi Effect.

Shalabi's Middle Eastern heritage is a major part of his work, from his regular use of the oud (the lute-like instrument that's as important to most Middle Eastern music as the guitar is to rock & roll) to the themes of albums like 2003's Osama, a fiercely political but entirely human response to the geopolitical turmoil following the September 9, 2001, terrorist attacks.

In 1996, he and guitarist Anthony Seck formed the free improv duo the Shalabi Effect, which grew into a quartet in 2008 with the addition of bassist Alexandre St-Onge and percussionist Will Eizlini. Apart from Shalabi Effect, he is also part of a number of bands, among which Detention, Molasses, Balai Mécanique, Po, ’Gypt Gore, a trio with David Kristian and Alexandre St-Onge and The Dwarfs of East Agouza together with Alan Bishop and Maurice Louca. His style ranges from freeform psychedelic rock to the most oddball abstract performance.

Here are Sam Shalabi's thoughts on the concept of failure.

Failure is the one of the most tangible and intangible things in the world. It is the thing that forms our sense of feeling like we belong - to ourselves and also to the outside world - so its subjective (what we want to or need to think we are and what we demand of ourselves-and so it forms our identity) and its also objective - how failure is defined for us by the outside-family, society, peers, lovers, friends etc.

I remember reading this great book on Time and Entropy by physicist Sean Carol, where his argument was that it’s better to think of Time as Entropy - as a process in the universe that we perceive as Time-as a secondary and not a 'primal' phenomena. The concept of failure needs a similar treatment-an ontological, maybe scientific or least philosophical treatment. As long as the 'measure' of it is anthropomorphic or 'too human', our measure or understanding of it will always come up short.

A plane crashing or a losing at poker are failures, but beyond these very obvious and specific 'case by case' things, we actually don’t have a kind of 'universal' idea of failure when it comes to humans (unless you’re religious or ideological, but those come and go as belief systems) that’s probably for the best until a better more ontological notion of what it is comes along since everything around is constantly trying to dictate what failure is - but at least an attempt to have a more rigorous concept of it would at least prove that there is no universal idea of failure when it comes to humanity.

As it is failure seems to be an example of what Alfred North Whitehead called 'misplaced concreteness' - our lives and the world seems to tell us that we know what the measure of failure is when we actually don’t.

As Bob Dylan sang "there’s no success like failure and failures no success at all", one person's failure is another's success -literally a lot of the time. What seemed a failure before is seen as a transition, change or process of evolution. It's all in the praxis and perspective to a great extent, but there are certain things for me like Ethics, which is really the only human domain where I can measure failure or success -it is much maligned in these post-everything days, but I think it is a fulcrum where things like economics, subjectivity, politics, art, love etc meet - it is here that for myself I try to measure a concept of failure.

Ethics is where everything human meets up and so the difference between success and failure lies somewhere in here, for me. If we are going to see failure as human, all too human, we may as well dive right into it and I think Ethical thinking and feeling is a good, if incomplete, compass until something better comes along.

Of course, as the cliche goes though, the only way to grow is through my mistakes or failures. I think a lot of that process goes on until we die - we slowly have a better understanding of what failure and success means for us and what is a 'real' failure or success - thats an ever evolving thing though. Things I perceived as one or the other have changed or become more nuanced over the years, or mutated into one another, and also the ability to deal with both has as well. I’ve gotten better at paying attention to things and not having bizarre expectations of what is for the most part a benign but indifferent chaos (the universe) in terms of music it goes without saying that failure, fucking up, mistakes etc - are more important as a tool than success, which is mostly a thing other people or society has to say about what you do, but that has nothing to do with the creative process.

Failure for me is really part of the freedom that comes with experimentation. If I didn’t or couldn’t accept failure, I wouldn’t learn anything.

Two years in the Attic

Some reflections on the first two years since the launch of The Attic platform.

The End Of The Beginning

We get back in time to reflect on The Attic Magazine's first year of life.