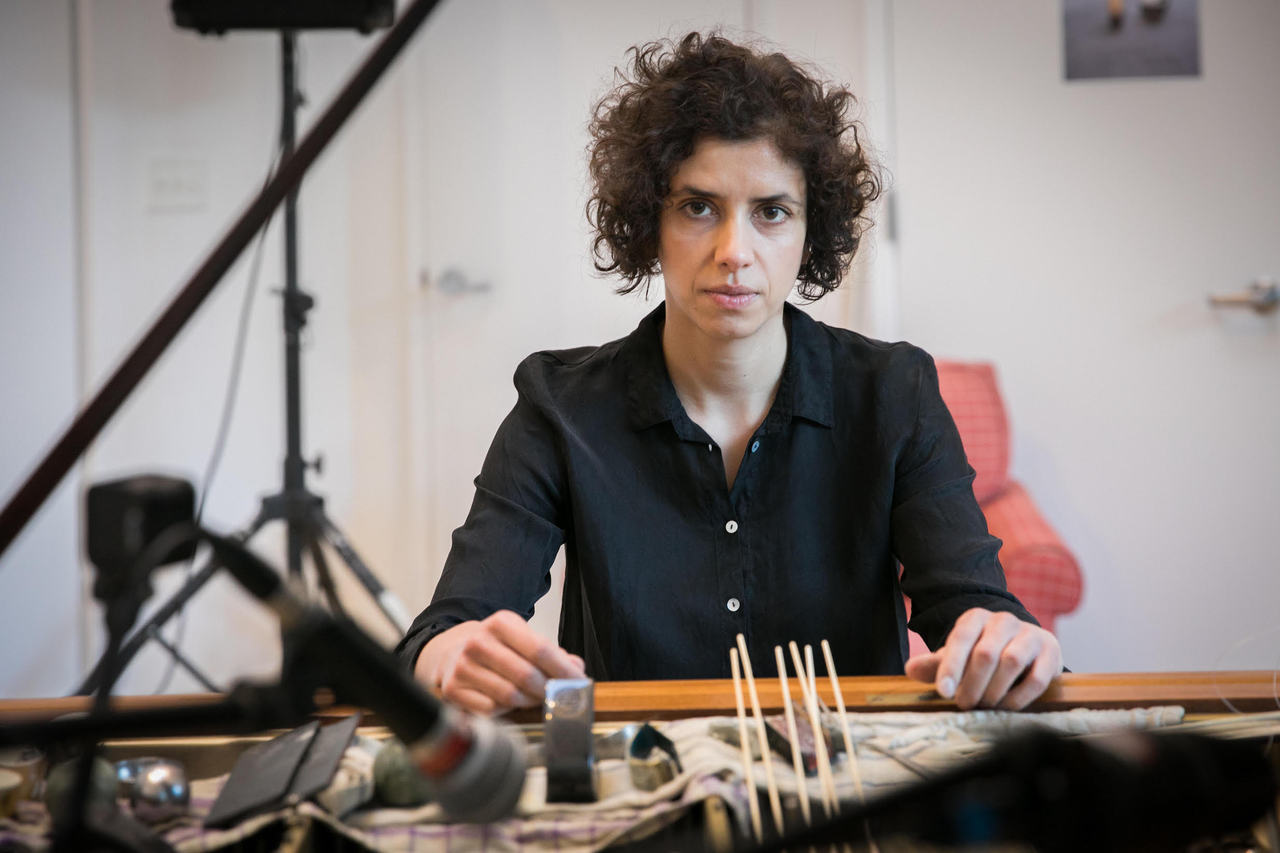 Collaborations combining mediums are nothing new. But Accretion, a 2018 joint effort between Berlin-based pianist and improvisor Magda Mayas and British dancer and choreographer Toby Kassell, makes an unusual leap: the pianist is the one choreographed. No dancers - professional or otherwise - take the stage: Mayas’ movements as she plays combine both mediums, dance and sound. The collaboration happens simultaneously in and with one body.

But not just one instrument. When the body is referred to as an instrument, it amplifies the connotations of the body itself as a medium between worlds – an instrument of communication between the personal and the impersonal, between the human and the not-human. Accretion is a performance for three grand pianos and one pianist.

“Now these three pianos function as acoustic amplifiers, which they always have been anyway, of course, but with multiplying the instruments I am projecting the sounds and myself into the space from various positions, in a very simple way.” 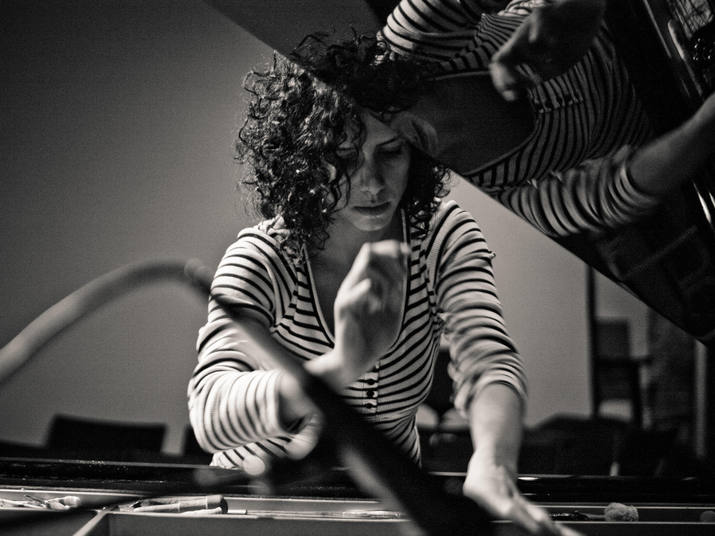 Photo by Peter Gannushkin
Growing up with two musician parents, Magda Mayas started playing classical repertoire on the piano as a kid and later when she was about 15 years old became interested in jazz and improvising at the instrument. She studied with Misha Mengelberg in her youth and over the years has been active in ensembles from Australia (Great Waitress) to Lebanon (with Christine Abdelnour). While collaborating with other musicians on improvised music, Mayas has increasingly become interested in incorporating extended techniques on the piano as a way to create music which would allow her to “blend and juxtapose the vast variety of sounds” heard from the other instruments. “It was an area I could explore on my own and still can, I think that was a very important aspect and contributed to the value and excitement of it initially”, Mayas explains.

In 2013, while working on a radio piece about this history of prepared piano for Australia's ABC network, she came across various unfamiliar works, an important discovery being Rădulescu’s Clepsydra for sixteen sound icons, in which pianos are placed on their sides, with their strings perpendicular to the ground. This brought to light a fascination with the use of timbre and spatiality in her own performance which was coupled with an already keen interest in other related topics like Psychoacoustics, Spectral Music, experimenting with amplification etc.

Mayas then decided that a practice-based PhD would be a good opportunity to explore these topics and she is currently four years into her research with the University of Gothenburg in Sweden, where she is working with the real-time orchestration of timbres with a spatial, perceptual and physical approach - “a holistic approach to sound which takes materiality of instrument and objects I use, physical gestures and body movements, as well as the space into account”, as she details.

Making of a Collaboration

In pursuing her research however, several other projects and directions have been developing for Mayas which likely wouldn’t have happened otherwise. While in Gothenburg, she happened to share a flat with dancer and choreographer Toby Kassell, employed at the Gothenburg Opera.

“We had lots of conversations about each other’s projects and things we are working on. I think the reason we started to collaborate happened mainly as I became more and more interested in the physicality of performance and developing more awareness of how I relate physically to sound and space”. Toby Kassell, her collaborator, studied at the Royal School of Ballet in London and has been based in Gothenburg, with their opera, for over a decade. His work focuses on developing original pieces that highlight the sonic side of movement.

The piano has always been a canvas for Mayas to approach with a multiplicity of materials or ideas - using non-musical objects to interact with it in ways both new and raw, uncomfortable and personal. In fact, many of the techniques she has been developing for years before this project began included stunning visual elements: constellations of bamboo skewers stuck into the bed of strings and sticking back up out of them vertically. Her use of fishing lines wrapped around various strings also makes her look like a puppeteer with a host of marionettes, especially because she stands up in front of the keys in order to conduct these strings, often with both hands several feet above the keys, in gestures more akin to washing space than to playing piano.

It was seeing those gestures, which already look like dance, that inspired Toby Kassell to get involved with her work. The quality of discussions initiated by seeing Mayas in performance helped open the way for a bigger look at the way Mayas’ movements in performance could be considered as both adding to the sounds and how more focus on movement could lead to a richer tapestry of sound that couldn’t have been found by focussing on sound alone. 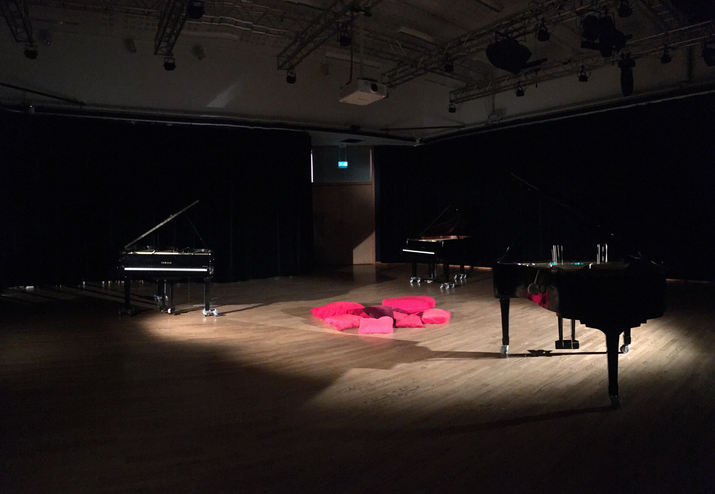 Navigating Multiple Mediums at Once

In a traditional piece of improvised music, the movement that accompanies a sound is just that: a practical residue of what it takes to make the sound, a means to an end. As Kassell describes it, “It’s not a movement that’s produced to be poetic or to make an aesthetical association – it’s a movement produced to make a sound. And when you look at that in a new way it becomes something else, without trying.” Not only does the movement “become something else” in Accretion - by shifting the attitude about it - it opens up new strategies of sound-making decisions for Mayas, because now they are also movement-making decisions. “Sometimes I might pick up the tool that’s next to me rather than that being an aesthetic choice”, she says, because now there are two aesthetics at play.

Previously, her movements were secondary to the production of the sound, but in Accretion the focus is on multiple mediums at once, and how to navigate both spatially and sonically. And that multi-focus was itself multiplied when the pianos multiplied. “Now these three pianos function as acoustic amplifiers, which they always have been anyway, of course, but with multiplying the instruments I am projecting the sounds and myself into the space from various positions, in a very simple way”.

The options have indeed increased because, in addition to having three instruments, the pianist can play one instrument from the position of another, or from elsewhere in the available physical space. The use of resonating materials is creating sonic and physical connections and transitions between the pianos which transforms the performance space both acoustically and physically. Some examples of the techniques are bowing a long fishing line or throwing magnets onto the strings of the piano, standing several meters away, all of which make for a different kind of spatial composition for Mayas.

The audience also has a decision to make when they choose where to listen to performances of the piece; there are two very different options: from the center of the room, within the three pianos, there is a circle of chairs, or on the outside of the circle of pianos, around the perimeter. As Kassell says, "There's also an element of choice for the public, there's definitely a decision to make. Immerse yourself in the center of the room, to be surrounded by the sound, or sit outside and listen to it from that perspective […] When you are right in the center of it, it is very disorientating, which I find very pleasant. That's a very different sensation from when you are outside the periphery, which is also very pleasant. I think it's very good to have these two different perspectives available to the public, because they will have different experiences watching or listening or experiencing the same piece.” 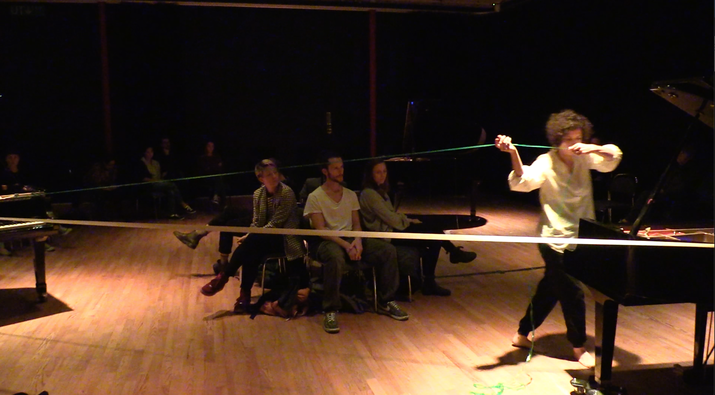 Memory as a Structural Tool and Functional Gestures

Philosophical ideas about time, space and memory inform the design and execution of Accretion. The use of memory as a structural tool is an area where Mayas and Kassell overlap in working methods.

“Playing with repetition and variation of material and thus accumulating different layers of material and memory, which is further multiplied by the 3 instruments, is the focus of the piece, hence the title, Accretion. Body movement and gestures are at times separated from the sound they would produce and function as reminders of what has happened”, Mayas explains.

When memory becomes a structural thing for the performer, it also becomes a point of entry for audience members: they have something to play with in their listening. This device ingeniously invites the audience member to think like the performer: “what kinds of decisions would I make to represent that music if I were the one playing it?”.

The movements Mayas makes are not wild, theatrical gestures for the sake of making gestures. Everything she does in terms of movement is still done to affect a sound: “the gestures are not a choreographed theatrical element – they are very functional and a way of going through musical thoughts in my head in a physical way. Memory manifests physically through these gestures and instruments, it becomes an object in space which makes it more tangible, so to speak”.

Accretion is a solo for Mayas to perform, but also a collaboration: not only would it not have happened without Kassell’s involvement, the structures, exercises, and ideas that he gave Mayas to work on guided the development of the piece. He changed how she saw sound. “The challenge for us was finding a way in which I could move in between instruments while developing techniques which would allow me to play the piano and make it sound while moving several meters away from it, connecting the instruments physically and sonically, at times having all three pianos sounding simultaneously.”

That sense of questioning space - how she occupies it while making sound, and how she occupies it while moving between sounds - is layered onto the question of the sounds themselves, which vary from ethereal to harsh, from somber to humorous, from controlled to free, and from traditionally musical to traditionally unmusical. Kassell and Mayas have opened up possibilities for movements to be about sonics and for sonics to be about movements while always insisting that every gesture and every tone be autonomously meaningful. It’s the kind of collaboration that feels like an awakening, an opening of the way for two mediums - movement and sound - to communicate in ways that they could have been doing all along. Natural, inevitable, magical. 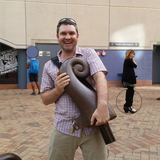 RP Boo talks about the fast and passionate world of the Chicago footwork scene, exploring its roots and evolution.