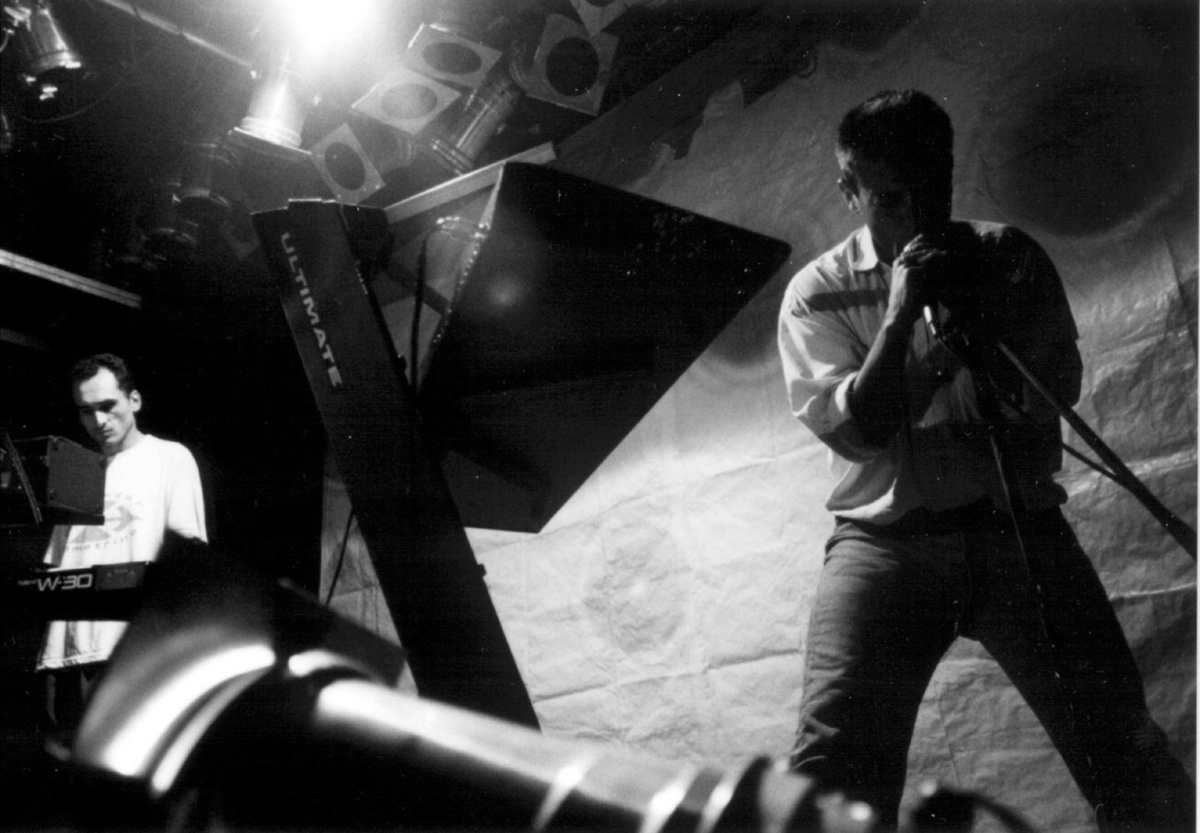 ‘’We intend to sing the love of danger, the habit of energy and fearlessness. (…) Why should we look back, when what we want is to break down the mysterious doors of the Impossible? Time and Space died yesterday. We already live in the absolute, because we have created eternal, omnipresent speed. (…) Art, in fact, can be nothing but violence, cruelty, and injustice.’’

*from the Founding and Manifesto of Futurism by the Italian poet Filippo Tommaso Marinetti, considered the founder of the Futurist movement.


It is 9 PM, on a cold Friday night in Berlin, and I’m trying to find a place where to sneak my empty bottle of beer. I’m wandering through the streets of this enigmatic city, near the Ostbanhof area. My hands got cold and I have this constant feeling of being already very late for the meeting with the Spanish electronic legends from Esplendor Geométrico.

My buddy Georgescu texts me: ‘Where are you? I am here already’; I feel hooked on my own despair. Since it is already very late, I start running chaotically on the streets, finding the hotel where we are suppose to meet. Streets seem mixed up, they tangle like in a puzzle game and nobody seems to know where the street that i’m looking for is. Living on the run. Unprivileged sweat. Sipping the unknown. High intensity. Sweet misery that offends the eye. Hope? What hope? There is no hope. Give up hope. The only actual hope is now.

I encounter these feelings again, a few hours later, in Berghain, (for the CTM festival), while Arturo Lanz shouts frantically on the microphone (and actually eats it up at certain moments during the show) and his band mate Saverio Evangelista controls the feverish ravers from the dance floor, using high but portioned doses of atrocious industrial and electronic music. Absolutely astonishing. So intense that at certain points everything becomes uncontrollable. We all dance uncontrollably. If this is hell, I sure want to be here.

Rewind. 9.30 PM. I make it to the hotel in time (with the help of a taxi driver) and we meet Arturo and Saverio in the lobby of this very cozy hotel, where a charming Romanian receptionist plays solitaire at her desk. Soothing jazz music silently flows on the background, a perfect ambiance for our roundtable conversation.

In 2015, Esplendor Geométrico celebrates 35 years of activity. Since their debut, the band’s sound has mutated with its membership over the years. Arturo Lanz, Gabriel Riaza and Juan Carlos Sastre formed Esplendor Geométrico in Madrid in 1980, after parting ways with their previous project, El Aviador Dro Y Sus Obreros Especializados.

The first concert took place in a record shop in Madrid, back in 1981. A decade later, Saverio Evangelista teamed up with the only remaining member of the band, Arturo. While the group's remaining members have since then dispersed to cities as far flung as Beijing and Rome, they have continued to release records and perform sporadically. 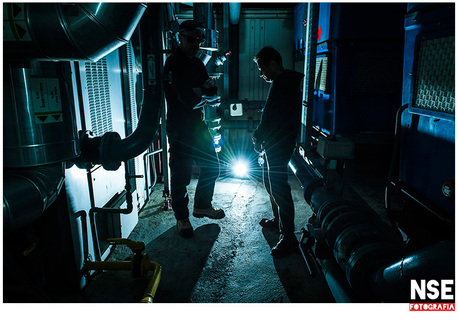 To mark three decades and a half of Esplendor Geométrico, they re-released a 5-vinyl-box, with a poster inside. Some of the tracks were released in the 90’s only on CDs. ’’It’s curious that before we released only vinyl (in the ‘80s), then only CDs (in the ‘90s) and now again vinyl. I don’t know how it will be in 10 years’’, Saverio says. ‘’It’s curious, because when Esplendor Geométrico began, the music in the clubs was mostly disco music, like Beegees or so. And now, the clubs like Berghain are prepared to the most avant-garde music’’, he adds.

They are both relaxed and cheerful. Arturo speaks about the rhythm and the noise, two very important elements of Esplendor’s music. ‘’I think here in Berlin is a very good context, because the sound system is nice and it will fit perfectly. For us the sound is very important. When we play in places where the sound is not enough for us, it’s a pity; we just don’t enjoy it. But I think tonight we’ll enjoy it. Nowadays, the sound system is OK almost everywhere, but in the ‘80s and ‘90s it was different. The venues were not prepared for this and the public was different. The audience is also totally different now than it was before. People are more used to hear this kind of music now. Back in the ‘80s it was difficult.’’

Over the years, the Spanish outfit developed a style of harsh industrial rhythms that could be noticed throughout their prolific discography. They were aware of some bands from the UK such as Cabaret Voltaire or Throbbing Gristle and they are considering them as being influential figures, but Spain was totally closed for this kind of music. Arturo recalls about his early contact with Sex Pistols. ‘’When I was 16, I heard the Sex Pistols. At some point I went to Zurich, I went to some record shops there and I started to see what’s happening in England. I bought my first Throbbing Gristle record, D.O.A. I didn’t know the German music. If I knew about Neu or Can, I would have probably enjoyed their music. But the first thing that I heard and considered interesting was Sex Pistols.’’

Arturo recalls that the music he made was mostly made for himself. ‘’It’s true that in these times in Spain it was mostly pop music. For example, in Germany or Japan, this music was much more recognized than in Spain in the ‘80s. In Spain nobody gave a shit about this music. Now it’s different, because you know…people grew up a little; but nobody that much’’, he concludes, laughing joyfully and remembering that, in the beginning, he felt misunderstood because people were thinking that they were fascists. 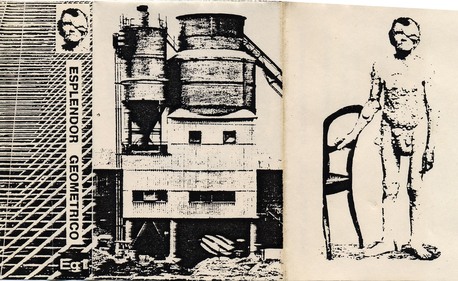 Saverio Evangelista joined officially Esplendor Geométrico in 1990, but he began to collaborate with the band in 1986, when he organized a concert in Rome, in Aula Magna of the University and prepared the visuals for that performance. ‘’You know how I discovered Esplendor, actually? Because I read a review in El Pays, a general newspaper’’ Saverio remembers. ‘’On the Sunday cultural supplement there was a review of the first LP of Esplendor. A very good review. The article included Esplendor, Brian Eno and a German group that was very famous in the 80s, called Trio (they had that hit called ‘Da, da, da). So, in the same review, they put ambient music, noise music and pop music. For me it was a surprise, because I was living in Madrid for the studies, and I bought a lot of Spanish records. When I came back to Rome I read El Pays and I discovered Esplendor, which was a big discovery. Even if I knew the Spanish scene, they were a surprise for me…’’.

Saverio bought one of his first records when he was around 13 or 14. It was Cat Stevens and Stevie Wonder. ‘’But when I started to listen to electronic music, I started with Krautrock. In Italy there was a very good underground musician called Maurizio Bianchi, a very interesting musician from the ‘80s, or even earlier, but using another name.’’

The band’s sound didn’t change much when Saverio joined on board, but if there was the case of any change, that happened due to technology, the switch from analogic to digital, in the ‘90s. But in any case, the sound of the band has evolved and enriched in substance with each new album being released. A lot of Arabic influences started to be incorporated into their music, pursuing for an (unadulterated) repetitive, trancey and minimal sound. ‘’The music of Esplendor Geométrico is impossible to be sung, like ‘na, na, na na’. There are no hits there. It is always the same. Only one track for 35 years’’, Arturo laughs.

Esplendor Geométrico comes from "Lo splendore geometrico e meccanico e la sensibilità numerica" written by Italian futurist F. T. Marinetti. Arturo admits that around 1975-1976 he was interested in the futurist movement, in this kind of philosophy. ‘’But our music has nothing to do with ideas, it’s only physic. It’s nothing intellectual, only physic. And there is no political message. Because everything you do is political; in terms of art, music, or anything else. When you do something, it’s political; it’s your relationship with the society. When I do music, of course I do something political, because I am in a relation with the society. And then, people take this as political. For me it’s only fun, I don’t know. I have no intention to do politics, but people take this and transform it into something political. We use a lot of voices in the music that are political; Muslim people, Tibetan people, even Che Guevara. We introduce this in the music because of the sound, not because of some political ideas. It’s the sound, the power of the sound. But these transfer to people in different ways, and they interpret. For me it’s nice, because people take the music and the music is made for them.’’

‘’In the ‘80s and ‘90s, Geometrik released some very nice music. At that time, the name of the label was Discos Esplendor Geometrico and then, in the ‘90s, he changed the name into Geometrik Records’’, Saverio remembers. The label also released two albums from Conrad Schnitzler and some of the work of Asmus Tietchens, besides other forward-thinking music from the likes of elusive projects such as De Fabriek, Macromassa, Jabir, Gen Ken, Das Synthetische Mischgewebe, Mecanica Popular (re-issued in 2015 by Finders Keepers) and others. ‘’We also released our music in Japan or the United States. In Europe we worked with Daft Records, a Belgian label run by Dirk Ivens (from projects such as Klinik or Vomito Negro) and in some other labels. But most of the releases came out on Geometrik’’, Saverio completes.

Even if back in the days they were not playing live so frequently, in the past few years Esplendor Geométrico started to tour more often. ‘’Now we have much more time’’, says Arturo. ‘’Before, I was living in Beijing, in China, and Saverio was living in Rome. Three years ago I came back to Spain. But in September I plan to move back to Shangai, we’ll see how that works with the live performances, maybe it will be more difficult to play. We’ll see what will happen next. Maybe we will do an Asian tour. We hope to release some new music after the summer of 2016.’’

After half an hour we have to finish our conversation, because another guy equipped with a big microphone and headphones has to interview EG as well. So we shake hands and greet the receptionist, while heading out of the hotel’s foyer. The night that followed was a memorable experience in many ways, and I could get a piece of that certain idea - and feeling - of rhythm and noise, which Arturo was talking about when we met.

Inside the fascinating universe of Breadwoman. Interview with avant-garde musician Anna Homler.

Interview from CTM festival in Berlin with Rabih Beaini, a multidisciplinary artist.

Read an interview with Robert Henke during the CTM Festival 2016.