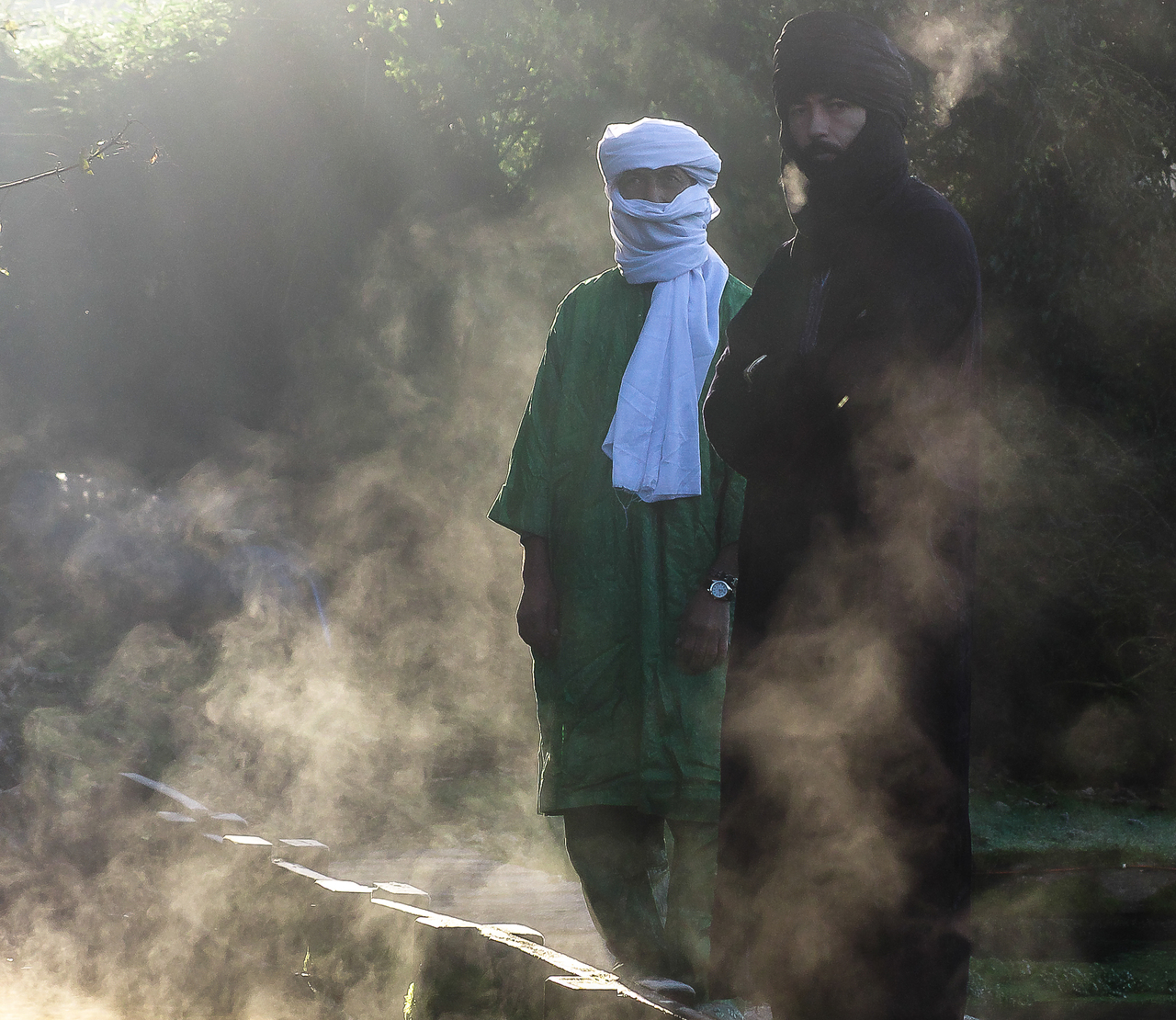 Terakaft - The Rebellious Caravan of Tuareg

It’s 5 PM and a lovely weather outside. You can feel it in the air; this is one of those sporadic days when magic arises from the unknown, when desolation seems to be just a joke of the past, when the sun fills the dark corners of our souls with warmth and excitement.

As we mind our own business, selecting hypnotic trancelike songs on the terrace of the Bucharest based Control club, we easily fell for the feeling of a glorious day that we’re about to experience. Well, also the cold beers play their part very well.

Speaking of beers, at some point I go inside the club for a refill. As I’m heading towards the bar - joyfully clacking my fingers from the right hand - I get demolished by an intense guitar riff, coming from the next room. Psychedelic. Ridiculously good. A twisted sound out of an electric guitar. I instantly turn and get in - goosebumps. Diara and his nephew Sanou are playing guitars on stage, while waiting for the other two members - Andrew and Nicholas - to come for the sound-check. In just a few hours later, the Tuareg band Terakaft would play a concert for the first time in Romania. I don’t know why, but I think Jimmy Hendrix would have dug this.

Experiencing Terakaft live was memorable. The show was extremely energetic, uplifting. There were some passages where you just couldn’t sit still, you had to dance; there was an insane groove electrocuting the audience. And then there were also slow blues like passages, in a good old classic form, adapted to the unique and fascinating sound of the Tuareg style of playing guitar. Forget about all the recordings you’ve listened before, all the interviews you’ve read with Tuareg bands, all the videos you’ve watched on YouTube from different festivals. For the first time ever, this was real; it could be felt, heard, touched, seen, discovered, experienced. Later on, during those tiny minutes from the middle of the night, when the concert happened, magic appeared as a natural thing and we were all part of that moment. An evanescent moment that you’ll remember long after it has been vanished.

As previously reported, in may 2015 Terakaft released a new album titled ‘Alone’ (on Out Here Records) and produced by Justin Adams. The sound of Terakaft (meaning "caravan" in Tamasheq) is sculpted by the pure searing air and the endless rolling sands of the Sahara. The stark, harsh conditions of the desert have permeated their wild riffs, and as a result they are the perfect embodiment of all that is wild and free in desert blues today.

We spoke with the band’s members to find out more about the origins of Terakaft and the Tuareg music.

“This is music for dancing. We also sing to talk about the Tuaregs to the world. The message is Peace. But not only. Our music is like sketches of life.” 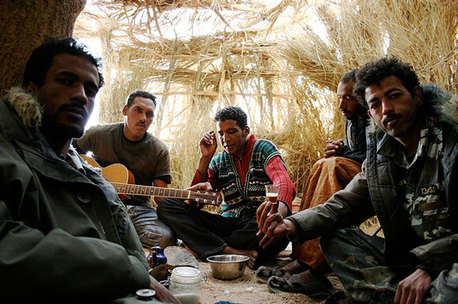 Until 2000, Tinariwen weren’t a group in the Western sense of the term, but more like a collective of different musicians and poets from the Adrar des Ifoghas area of Saharan Northern Mali.

Tuareg music was given to birth around the end of the ‘70s, when Ibrahim, known as Abaraybone, got his first guitar whilst in exile in Tamanrasset, Algeria. Around the same time, he met Diara in Timiaouine and became good friends with his brother, Intiyeden, whom he introduced to the guitar. ‘’I learned how to play the guitar almost alone, or with my friends Abaraybone and Soueloum, and my brother Inteyeden’’, says Diara. ‘’More than training, we were playing all the time, this how we caught up an own style. Abaraybone was the closest friend of Inteyeden, my brother. Together they were composing a lot of songs. I joined them very soon and we spent a lot of time all together, with Hassan too, like true Ishumars.’’

This guitar based music, new to the Tuaregs , was an immediate success at the gatherings of the Ishumar, the young Tuaregs in exile. In their wake, other musicians/poets joined the original duo, as their wanderings allowed. The Tinariwen collective was born. Among the original members were Diara, Hassan, Sweiloum, and then, a little later, Kedou, Abdallah ‘Catastrophe’ and Mohamed ‘Japonais’. Their songs, duplicated on audiocassettes, would contribute to spreading the call for a Tuareg political awakening and would play a crucial role in the future rebellions. All these young Ishumar were in exile between Algeria and Lybia and would sign up for the Libyan revolutionary and politician Gaddafi’s military training camps. Some of them would participate in the fighting in Lebanon or Chad, then ended up deserting, taking with them their newly acquired military skills.

"I have created a Utopia here in Libya. Not an imaginary one that people write about in books, but a concrete Utopia." Muammar Gaddafi around ’78 – ‘80s.

‘’As many young Tuaregs in the early 80's, I went to Lybia because Gaddafi was inviting us to come’’, Diara recalls. ‘’Colonel Gaddafi was the only one to come with a proposal to us, the "Ishumars" (the ones with no job)... We practiced electric guitar a lot in there. One of the guys with us at this moment was Thomas Sankara, later on the President of Burkina Faso. In Lybia, he was also playing some guitar’’, Diara says. ‘’There was a problem between north and south of Mali. There was nothing to do in the north for most of the people who were already very poor nomads. Then came a rebellion and fights with the army. The context was very bad, no future ahead.’’

In the early days of Tinariwen, it was not a good climate because there was a rebellion in North-Mali. ‘’Our music was forbidden. It was not good to be found with tapes of Tinariwen.’’

Around 2000, Kedou founded the band Terakaft together with Sanou, a 20 years old Ishumar guitarist and the nephew of Intiyeden and Diara. During this time, Tinariwen exploded on the international music scene with the albums ‘Amassakoul’ and ‘Aman Iman’, and started touring around the world. In 2012, they won the Grammy Award for Best World Music Album for their album ‘Tassili’. Meanwhile, Diara had joined Terakaft.

At the end of the 2008 tour of Terakaft, Kedou announced his departure. ‘’Kedou joined Tinariwen around 1985, he was very young. As some other Tinariwen, our families came from the same area. He also joined Sanou and Terakaft in 2001, before I did. He is a good singer, a good entertainer on stage, and he sings most of my songs, or those from Inteyeden’’, Diara says.

Nowadays, on stage, Terakaft is a 4 piece band: two guitars, bass (Andrew Sudhibhasilp) and drums (Nicolas Grupp). Nicolas & Andrew have come to Terakaft like a natural story. They bring a sound to the band, which is very much like the sound of the 70's.

Husband and father of four children, Diara is inspired by life; and nature too. ‘’And I like very much to teach "do, ré, mi, fa, sol, la, si, do" to pupils.’ I can write a song everywhere, or at anytime. It comes with some words and I first try to find the main chords. With a little time working alone, the song is coming. When I have the song, I show it to the band.’’

Diara listens to all kinds of music with all kinds of people. ‘’There is more music in the Sahara, from everywhere‘’, he says. ‘’Today, as I travel to western countries, I also listen to much western music, from CDs or on the radio. It opens the mind but I keep my own style. So, our music is for dancing. We also sing to talk about the Tuaregs to the world. The message is Peace. But not only. Our music is like sketches of life’’.

Asked about any regrets, Diara replies that his ‘’regret is never see the Tuareg people happy where they are, since times. I am sorry for the young people.’’

''Hey you, my friend, bring me water
My heart is wretched
It burns in me
I'll tell you an old secret I have kept
I will reveal it, I cannot hide it any more
By the sword and by our ancestors
They have left a history
And it is for it that we must flourish’’
- Kek Amidi Nin 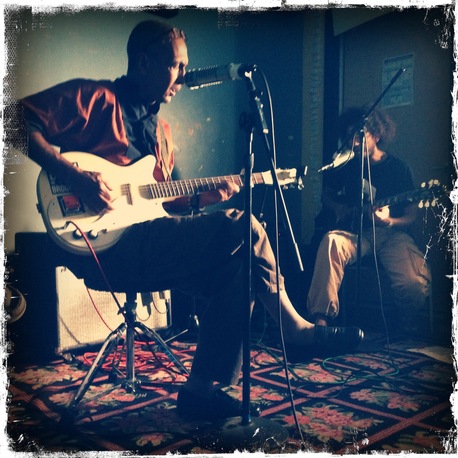 But there is another person who played - and still plays - a crucial role in Terakaft. Philippe Brix embarked as the band’s manager in the summer of 2006.

‘’I was in Bamako where I met Kedou, a former singer from Tinariwen, whom I already met in 2001 in Kidal when Tinariwen recorded 'Radio Tisdas sessions'. He told me he had his own band called Terakaft now, with Sanou. In early 2007 I came back to Mali to attend the Festival in the Desert. Terakaft was on stage. And the guy on rhythm guitar was Diara, beside Kedou and Sanou. I already knew Diara, one of the key leaders and founders of Tinariwen. Kedou seemed to be the chief of Terakaft at the beginning. But soon I understood that Diara was the real leader of the band, talking about music as talking about the band itself. Since 2007, Terakaft began to visit Europe at least twice a year to tour; this is how I began to understand who they really were'' Philippe says.

‘’I met Diara in 2004 I think, or later. It was in Mali. I had heard about him, but he came to me in a very cool way. He knew that I was now managing Tinariwen. I think he wanted to know who I was. Now that I know him well, I understand this more than ever. Diara should be still with Tinariwen today because it was his band. But life brought him to Terakaft, with his nephew Sanou. Sanou, I first saw him on stage, at Festival in the Desert 2007. He was brilliant on stage,’’ Philippe recalls.

‘’The sun is there.
Some are in the sun; some are in the shade.
There’s not only one God.
They see us; we do not see them.
They are in real houses; we are in fake houses.’’
- Tafouk Tele

‘’Lions…
We are men of history,
We are solid and resistant,
We are ferocious running lions,
We warn the world that this year we come with the truth.
All together.’’
- Anabayou

In Conversation with Sir Richard Bishop

Alec Empire of Atari Teenage Riot in conversation with The Attic, during the 2015 CTM Festival (Berlin).