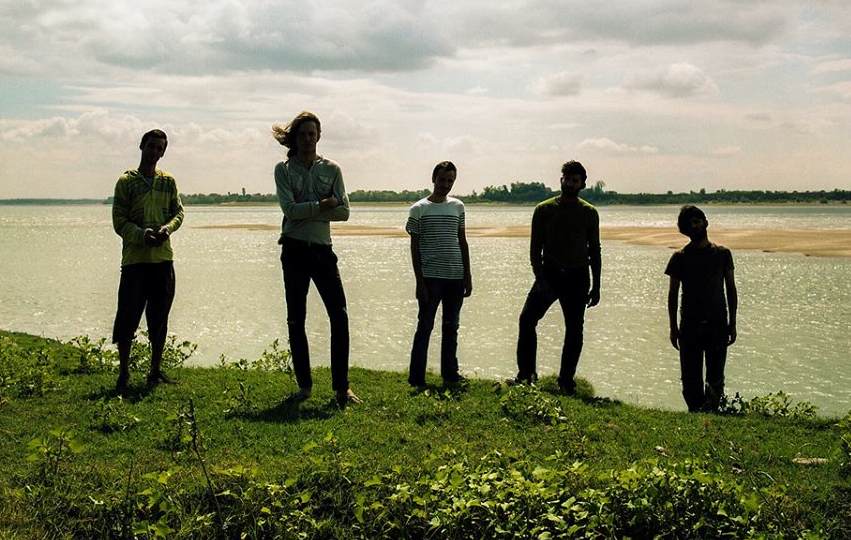 After ''Sounds Of The Unheard'' was considered by many the compilation of the year 2012 (from the label's Romanian ambassadors Future Nuggets), next year there was a new bomb preparing its explosion - the debut album of Steaua de Mare. Five young guys, Bogdan Stoian (violin, synths), Andrei Dinescu (percussion, drums, violin, synths), Ion Dumitrescu (bass, synths, drum-machines, drums), Horatiu S (synths, electric piano) and Eugen Imecs (drums, percussion) came together after many years of jamming and decided to pull all resources together in two different studios around Bucharest. They named the band Steaua de Mare, inspired by the post apocalyptic atmosphere of the '80s from a luxurious Black Sea resort Eforie Nord. As people relaxed in the sun and ate good food, traditional songs were played by restaurant bands. Every participant was breathing a unique atmosphere, stories and vibes that are now long gone and form what we ironically call today, past.

“Bands like Steaua de Mare act as a bridge between different generations and link people with different musical tastes and different perceptions and mentalities, fighting against racism, with instruments as the only weapons. ”

But Steaua de Mare is just one of the few music projects the guys formed; one of them is Concentration Band. In late summer of 2013, Steaua de Mare played at the same festival where I interviewed Alexander Bălănescu, so I had the chance to meet the entire band, although I spoke only with two of the members. The interview was for the National Cultural radio, so it should have had a temporal and spatial proximity. Even so, most of the interview was common and somehow insipid. Even though, the beer was nice and the concert was good.

''We sing under different names, this is just one of them'' says Andrei Dinescu, having a zip of a draft Romanian beer. It is warm outside, so all of the members are joyful and clear. There's a sparkle of clever dodger in his eyes, which, along with his very long hair, gives him an expression of wild freak, a combination of uneasy hippie rocker and underground punker, filtered on the dusty streets of Bucharest. ''Yes, the name Steaua de Mare is inspired by the atmosphere from the late '80s, I was four years old at that time and...'' ''The classic dystopia'', Ion interferes.

Steaua de Mare uniquely and wisely combines different music elements, from Prog to dub, from psychedelic rock to contemporary gypsy music (Manele), mainly from Romania and Bulgaria into the mix. Manele ('manea' originally meaning 'Turkish song' in Romanian) is a musical genre (already known worldwide) that has taken over the whole Balkans in the past twenty years. This music hybrid has already spawned mature voices and local heroes such as Dan Armeanca, Adrian Minune, Florin Salam, Vali Vijelie, Dan Draghici and many others.

Manele is associated with contemporary gipsy wedding music, but this is a style that has already breached the borders. Greek, Turkish and some Arabian traditional music inspire most of the melodic themes from manele. But the Romanian society doesn't really accept manele as a valid cultural product; it is accused of idiocy, of coarseness. In the common thinking, this is unrefined music, and this music kills the culture's level of quality. (cough)

There are bands like Steaua de Mare who act as a bridge between different generations and who link people with different musical tastes and different perceptions and mentalities, fighting against racism with instruments as the only weapons (since their music is only instrumental; yet.)

''Manele is still disputed nowadays, compared to a few years ago'', Andrei admits. ”Only because a few emancipated youngsters discovered the oriental fuzz in music and started to accept manele as a cool thing of today, doesn't mean that the Manele are now socially accepted. Actually it was the racism inside them, that made people hate manele, not particularly the music itself. And some people understood that racism was the reason for not accepting this music. Which is good.''

''Nevertheless, there is still a problem listening, or playing manele as a DJ'', says Ion. ''I recently played in a festival, which took place on a platform of the North train station from Bucharest, and some chief from the railway came and asked me to stop this crap. It was absurd.''

''It's just like here, at this festival, which is so called a Balkan festival, but there aren't any gipsy ambassadors. Manele is contemporary Balkan music. I noticed that the white society (or people) who organize the event in town only accept the old gipsy guy signing on wood, but not also the contemporary gipsy guy singing manele with a 5000 euro keyboard'', adds Andrei.

''This is not a matter of whether you like this music or you don't'', says Ion D. ''But manele has the right to be treated equally as any style of music.'' ''And it's not fair for the entire music industry, to say that the lyrics from manele are stupid, wrong and indecent'', Andrei adds.

Their studio encompasses some jewels that give this unique flavor in their music, like Roland Juno 60, Yamaha CS-5, Elektronika EM-25, Junost-21, Poly 61 and their beloved Wurlitzer electric Piano.

Steaua de Mare gets its sap from various sources like Can, Ork Universal, psychedelic musical attitude, the so-called Krautrock movement and Bulgarian Chalga. They are irreversibly contaminated in analogue and early digital sounds; many believe that Steaua de Mare is a band like no other, right now.

Everything You Are About To Hear Is Absolutely Real

At the edge of two (imaginary) worlds of electronic music, academic and popular, M. C. (Martin) Schmidt and Drew Daniel from Matmos discuss their work.

Lăutărie Then and Now: Inside Romania's Romani Musical Heritage

Conversations with four lăutari from different backgrounds and generations about the journey of the Romanian-Romani music genre known as "muzica lăutarească".

The Polyphonic Search for Authenticity in a Balkan Country

From archaic phonos to “Made in Romania“, here's a look on how the term “Balkan” is used in the construction and perception of rock music and manele.