Fernando Pessoa and The Newfound Existentialism

“While texting with a friend shortly after the pandemic escalated, I wrote about the ‘perverted paradox I’m going through where my normal alienation is being replaced by an isolation that makes me feel connected in a larger way for the first time.’”

Individuality in times of lockdown, here we are, the trite contradiction of being alone together notwithstanding. Understandings of the Portuguese writer Fernando Pessoa’s life frequently begin with descriptions of his great isolation: from work as a clerk to alone at home and back around again he is said to have lived. When I approach my copy of the Richard Zenith translation of The Book of Disquiet (I also like the Alfred Mac Adam version), I notice five pieces of paper demarcating passages I at one time found extra-pertinent. (The entire book is scribbled-through with my underlines and jottings, with each reading-through color-coded in a different ink.) The first paper I flip open to shows a folded-over post-it note with an arrow drawn on it pointing to the sentence “Not even our own soul is ours.”2 The sentence is underlined back and forth, bracketed, and emphasized yet further with a circular squiggle in the margin next to it, all in dark red.

This sentence gets to the heart of the paradox of Pessoa’s writings: he was an absolute loner, and yet his writings—almost down to each and every clause—focus on the ineffable connection that every human has to every other human. A lot of people don’t have the taste for his brooding, sentimental existentialism. But his work does wonders for those nourishing a metabolism of solitary, kaleidoscopic projection, where emotion and imagination amplify and intersect and exaggerate each other in a continuous pullulation of mentation. Pessoa narrates how an emotion feeds the imagination, which in turn feeds the emotion, or another emotion, which again feeds the imagination, and the cycle of thought, feeling, vision, and reality-formation is suddenly obvious, graspable, and completely immaterial.

The supposed contradiction between his life and the subject of his books reminds me of a current paradox. While texting with a friend shortly after the pandemic escalated, I wrote about the “perverted paradox I’m going through where my normal alienation is being replaced by an isolation that makes me feel connected in a larger way for the first time.” photo: Andrew Choate
For a lot of us that live on the fringe—either economically, artistically, socially, geographically, or otherwise—there is the possibility of actually feeling like we belong not just to the world, but to an “our world” for the first time. Isolated naturally and accidentally by our personalities or circumstances, we’re now reading about how the perfunctorily-functioning members of society are struggling with situations we’ve been living in for years, if not decades. Honestly, it’s amusing to watch the normies squirm. “Do you really rely on that much assurance from the outside world?” I find myself wondering when I see rote, desperately expressed desires for all the banal routines to be reinstated. Speaking of amusements, I found another one of my sticky notes, with another arrow drawn upon it, this time pointing to these lines of Pessoa: “Let us make everything an absurdity and turn all our sterile hours into pure futilities. Let us play hide-and-seek with our consciousness of living.” 3 Is there any greater reward for living than celebrating futility? Can we use our time—this time—to cultivate an attitude of curiosity toward the pros and cons of the awareness of our existence?

Awareness of the nature of existence in general or in detail are two different kinds of thought patterns. In general, existence feels fleeting, serendipitous, beautiful, absurd, defined by loss, simultaneously external and internal at all moments: with us, within us, and without us: just passing through. In detail, existence is our existence: our memories; our desires; our experiences; our losses; our successes; our friendships; our mistakes; our clothes; our ailments; our tastes. It’s easy to deny both kinds of thought: the general because it can be so cosmically amazing as to become paralyzing, the detailed because it can be so infinitesimally specific as to be psychically overwhelming. Looking toward the middle distance is the preferred method of modern, middlebrow, urban humans: what do you want to accomplish in five years, ten years, etc. The attainable, the possible, the carrot at the end of the stick, focusing on what is real on an explicitly human scale: these goals motivate the middle-class masses. Not the carrot bred with fennel that doesn’t exist or the impossible moment of psychedelic eclipse. The model employee-citizen isn’t supposed to value any moment too highly, because they’d run the danger of seeking to value each moment of their life. (What a dangerous concept that would be, considering the proportion of bullshit-to-accomplishment so many careers require.) “I’m oblivious to my inward existence. I turn, I spin, I forge myself.” 4

Follow
Teaching employee-humans to be in denial of the details of the futility of our own existence is what modern economies are built on, the primal psychological shift required for acceptance of The Great Compromise necessary for survival. (Secondary and tertiary rewards for such acceptance involve the bestowing of an identity based on one’s labor, or some kind of luxury.) As we nestle into the coronasphere, a lot of the easily-available journalism is written from the perspective of those for whom the previous “normal’ was a fine thing, a thing to return to as quickly as possible. So for whom was this kind of “normal” social organization working for; who was succeeding in it?

Maybe it was working for you. Your personal brand of micro-aesthetic radicality was still turning the cogs of economic functionality - on the fringes of the marketplace albeit, but nonetheless cogging. The intertwining of experimental arts with academic economies and trickle-down corporate sponsorship–often under the guise of a community arts partnership–has been happening for decades.

The artist as self-advertisement. Proficient in marketing rather than medium. Constantly writing about one’s work, applying for money and recognition, grants and residencies. “Necessary evils” the argument goes. The result for the public rarely gets mentioned: the art put in front of us—from the grand concert halls to the MFA showrooms to the DIY community venues—is art made from the same kind of psychology, the one whose primary proficiency is self-advertising, not artistry.

Those of us for whom even a tenuous relationship to society would be a generous description aren’t necessarily feeling schadenfreude at this moment. In fact it’s kind of the opposite: we welcome you to join us—the undesired, the unrewarded, the usually-unwelcome—in the comfort of the everyday existential quandary. Not only will you be asked to solve said quandaries; you’ll have to create them as well, custom-made for your own personal query and fit!

Here in the United States, from the radio to the newspaper to the politician mid-press conference, there is a lot of talk of heroes in relation to this pandemic. Delivery drivers are heroes. Grocery-store workers are heroes. Factory laborers are heroes. The way the word “hero” is being used, it implies that these people are putting the health of others before their own, that they are making a conscious choice to sacrifice for the well-being of others. That may very well be true in some rare instances. But that conception ignores the very obvious truth at the heart of these jobs: these people don’t have the freedom to choose not to go to work. They are too poor to decide if their own health is important because they know they will not have any money if they don’t work. We’ve set up a society that is asking these specific people to choose between health and money, and when they choose money, we call them a hero.

Poverty is heroism. The ruling elites have finally made one of the fundamental tenets of capitalism explicit: the poor are here to be exploited, sacrificed, and made heroes. It’s a pretty good trade-off for the rich, almost the very definition of lip service. If it was a negotiation, it would be settled instantly. “Sure, call ‘em whatever they want, as long as I get whatever I need and I don’t have to do anything else but congratulate' em with a titular platitude.”
Poor people—the ones out delivering hot food— are being discussed as if they are heroes, because they are sacrificing for “the rest of us.” Articles abound questioning the ethics of having food delivered, as if this is the very first time some authors have considered that a lot of the jobs that people do every day, around the world, are dehumanizing and dangerous to such a degree—emotionally, physically, or otherwise—that their lives are at stake. If we eradicated all of the labor that is immoral around the globe—and I define immoral as requiring an act that fucking sucks—civilization would stop.

It won’t stop completely this time, and the shitty jobs will continue after the pandemic abates. But in the meantime I’m enjoying the sudden outcroppings of awareness by the normies, the ones asking themselves basic questions about their place in the scheme of bullshit-tossing known as the global economy for the first time.

The essence of middlebrow-wonk philosophizing mid-corona needs to be contrasted with a poem by Pessoa to underscore the existentiality at stake. Gambuto, the clever mediocrite, in the essay linked to above, declares “our way of life is not without purpose.”
Pessoa says “Don’t come to me with any conclusions.”
Gambuto the mediocrite says, “If we want our neighbors and friends to earn a dignified income, we can make that happen.”
Pessoa: “I already said I don’t want anything.”
Wonk: “We do care. We just don’t have time to do anything about it.”
Pessoa: “Perfect and empty eternal truth.” 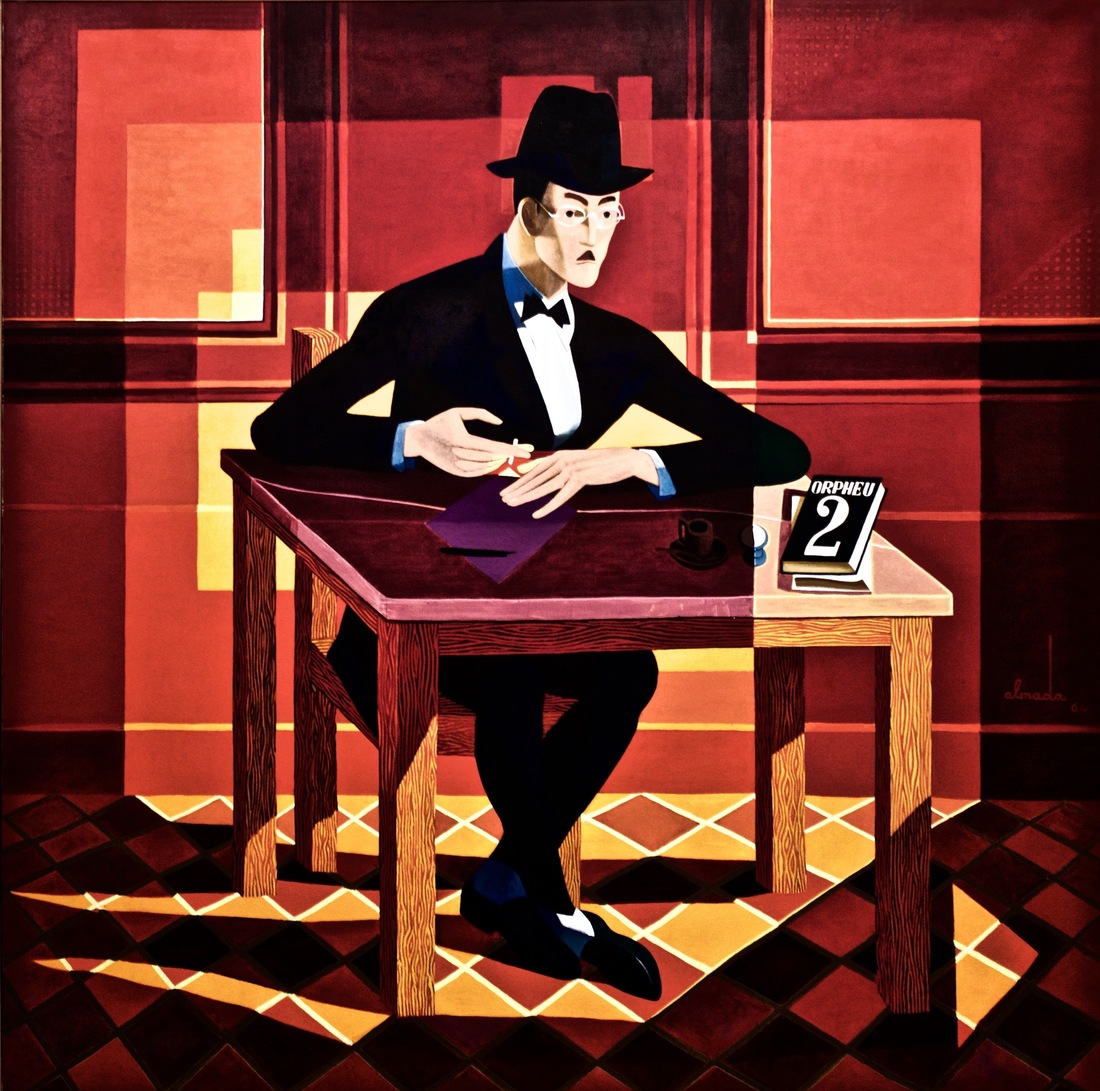